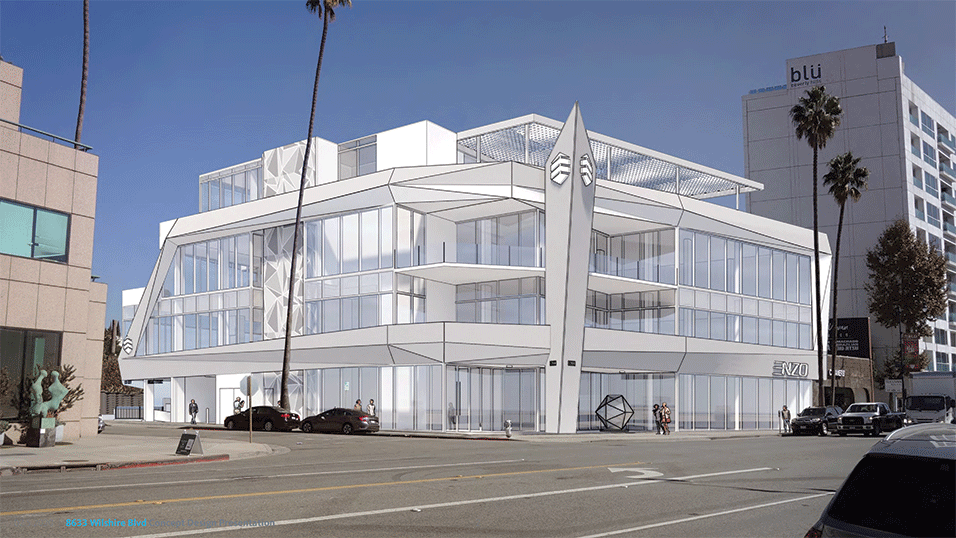 A planned three-story building on Wilshire Boulevard will primarily house office tenants. (rendering by Gabbay Architects/courtesy of the city of Beverly Hills)

The project, which will be located at 8633 Wilshire Blvd., is being developed by Goggles 8633 LLC, though in the Planning Commission meeting, three executives from Beverly Hills-based real estate investment firm Lucent Capital and Hamad Gabbay of Gabbay Architects represented the project’s owners.

The building will be three stories or 45 feet tall, though with the outdoor terrace and an enclosed employee break room on the roof, the total height is 60 feet. Floors two and three of the building will be designated for office space, and the first floor can be used for office, restaurant or retail space. No potential tenants have been identified yet, but medical use is prohibited, and uses such as a nightclub or car dealership would require a conditional use permit from the city, according to Ryan Gohlich, the city’s assistant director of community development.

It will also include four levels of subterranean parking to provide 76 spaces – two more than required by city code – and a truck-loading space.

The commissioners were generally in support of the project, though several noted that they wished this site – which currently is occupied by a single-story building and parking lot at the corner of Wilshire Boulevard and North Carson Road – could have been used for a mixed-use project.

“It is exactly this type of property that we would love to have [as a mixed-use building],” Commissioner Myra Demeter said.

Issac Gabai, managing director of Lucent Capital and of no affiliation with Gabbay Architects, said they also had wanted a mixed-use project, but they could not afford to hold the property without developing it until the city’s mixed-use ordinance is decided.

“If the time comes and it makes sense, we’d happily change to mixed use, but we don’t have the holding power to wait and wait years and sometimes decades,” Gabai said.

The Planning Commission approved a mixed-use ordinance for the city last month, but the City Council has yet to finalize the ordinance. The council is expected to consider it later this summer or early this fall.

Some neighbors of the project were in support, but others, especially those who said they live on North Carson Road, expressed concern that the office building would create problems with traffic, parking and privacy. One of the most frequently recurring complaints was that the rooftop area would be loud or provide views into the backyards of the homes that are immediately north of the project site. The project owner’s representatives were insistent that there would be no issues with the rooftop area.

“I can promise you that the way this landscaping and the setback is done, it is almost impossible to look in anybody’s back yard,” Gabbay, the architect, said.

The commissioners were pleased with the developers’ plans for landscaping to be used to prevent views into nearby residential areas.

“I’m satisfied that people aren’t going to be looking into other people’s backyards, which is something I certainly couldn’t support but I don’t think that’s going to happen here,” Chair Peter Ostroff said.

Gohlich noted the landscaping will be reviewed by the city’s Architectural Commission, as will the plan to mitigate the light coming off of the building that might be an annoyance to neighbors.

Demeter and Vice Chair Lori Greene Gordon said they would like to see transparent acoustic screens and more visual barriers to protect the privacy and peace of neighbors.

“It’s very different when you have one person enjoying the evening air and doing some work outside versus a group of people congregating and making noise and perhaps imbibing. I think that rooftop has to be specified in terms of the hours, illumination, everything,” Demeter said.

The other commissioners declined to support additional barriers, though they did agree to limit the rooftop hours to 8 p.m. each day – 10 p.m. had been proposed – and prohibit the playing of amplified music at any time on the roof.

Amir Dar, managing director of Lucent Capital, said the coronavirus pandemic showed how important outdoor space can be, and they were only trying to play meditative music as ambient noise that would be half the decibel level of an air conditioning unit.

“We’re not trying to do anything up there that will be disruptive. We’re just trying to mute out the noise from Wilshire Boulevard, not create any noise,” Dar said.

Commissioner Thomas Hudnut said he had a “lack of enthusiasm for music of any sort” on the roof.

“Air conditioning noise is white sound, but one person’s taste in music is another person’s horror show, so I think if you stay away from music, you’ll be better off,” Hudnut said.

The commissioners also pushed back against Gordon’s request to require the street-facing portion of the first floor to be used for a restaurant, retail or another use “that will allow the street to be activated,” as the location is only a few blocks from the subway station at Wilshire/La Cienega that’s currently under construction.

“This is pretty close to the subway exit, and I think it’s necessary that we really start planning. If we’re building a new building, I think we really have to look at that as something that is important for the community that is exiting the subway,” Gordon said.

The other commissioners were worried that Gordon’s request would unfairly limit the developer’s ability to find renters for the building.

“So if they can’t get a restaurant, they can’t lease it? I think we’re getting into the developer’s business, and that’s not our job,” Commissioner Andy Licht said.