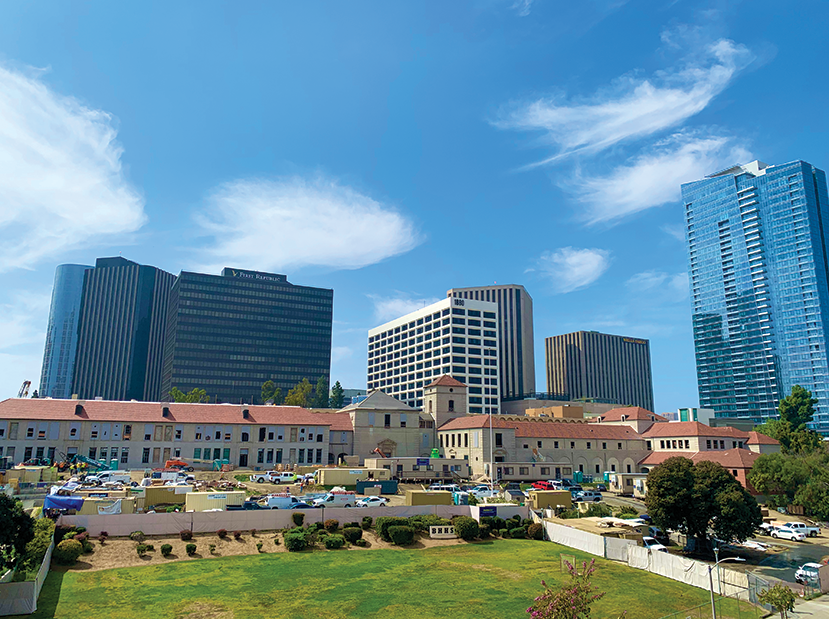 Beverly Hills High School students may not return to school in person when classes resume on Aug. 17. (photo courtesy of BHUSD)

On July 7, many members of the Beverly Hills Unified School District Board of Education indicated their support for a plan to have students remain at home when school starts this fall, while teachers would return to their classroom to livestream lessons.

The idea emerged after board members raised issues with the two offerings proposed by district staff.

The hybrid and online models are tentative, and Superintendent Michael Bregy noted that the district is still waiting on necessary direction from the Los Angeles County Department of Public Health before firm decisions can be made.

However, the school district asked students and their families to indicate if they would like to enroll in the ILC by July 15. Multiple school board members felt next week is too soon to ask for a decision, as so much is still unknown about the coronavirus pandemic.

“We are taking a leap when we don’t have enough information to make the right choice … I am not willing to risk the lives of our families, our extended parents and grandparents … I’m not willing to put our teachers on the line. I don’t think it’s worth it,” board member Tristen Walker-Shuman said.

Some board members said they’d also heard from students and teachers that the Apex Learning curriculum used by the ILC is insufficient for Beverly Hills High School students.

“There’s a strong, strong feeling that Apex is not the rigorous program that our students need and that we’re used to … I’m hearing it from people who have taught it … teachers who have actually witnessed it and found it to be less than ideal for our school district,” board Vice President Rachelle Marcus said.

Some district officials and board members pushed back in support of Apex and wanted to allow the ILC to continue, but those board members also signaled support for changing the hybrid model to have students learn at home full-time, while teachers would return to the classroom and teach via livestream.

Board member Mel Spitz was also in favor of putting the teachers in classrooms and having the students remain home, saying he “strongly” supported the idea.

“I’m very hopeful that this new idea … It has so many advantages to it … It’s just obviously the best potential for our students,” Spitz said.

Board President Isabel Hacker encouraged Bregy to allow those who had already signed up for the ILC to change their minds if they wish and switch to the online learning method that would replace the hybrid model. According to Bregy’s report to the board, 304 students had already indicated they would want to learn via the ILC: 122 students in high school, 73 in middle school and 109 in elementary.

“None of these options are perfect, but it’s not like you can build your own pizza as you go. Everyone wants what they want, but I think this would be an optimal opportunity for us to consider,” Hacker said.

Yoni Kashanian, the student representative to the school board, said he believes many people who signed up for the ILC will change to the new model.

“I don’t know why anyone would want to go about doing independent learning unless they’re an actor or someone in professional sports,” Kashanian said.

Bregy said district staff needs time to flesh out the details of this new idea, and parent meetings scheduled for this week may be pushed back until next week to allow district staff to give staff that time.

“The last thing I want to do is start answering questions before we’ve had a chance to put things together,” Bregy said.

Before school resumes on Aug. 17, agreements will also need to be worked out with the teachers union, health and safety protocols will need to be finalized and teachers will undergo additional training on the technology to make the online learning as effective as possible, Bregy said.

“We want our teachers to have the training they need and the resources that they need to do this. We have the gift of a bit of time that we didn’t have on the first bit of the pandemic coming in. We want to use this time wisely, but we also want to be very collaborative about how we move forward, when we move forward and work together,” Bregy said.