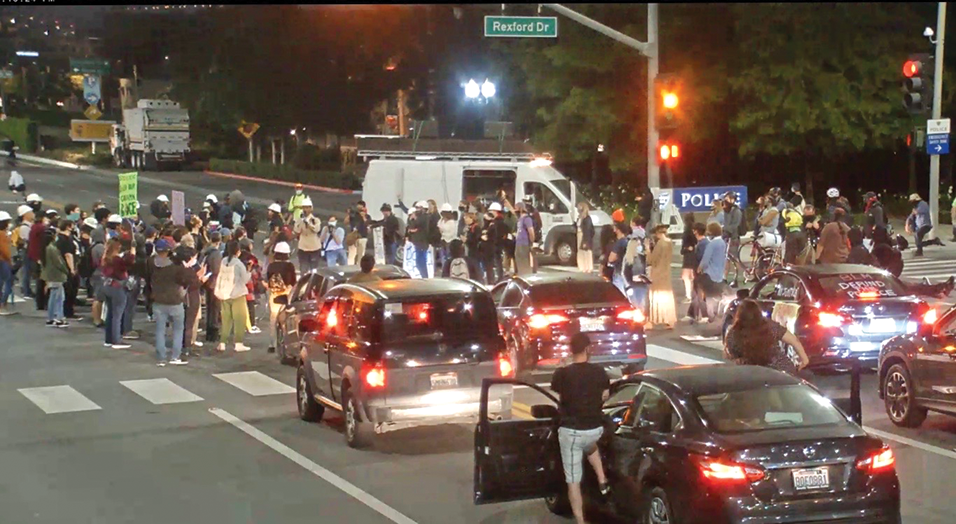 On June 26, a group of about 100 protesters staged a peaceful protest in Beverly Hills, starting near Santa Monica Boulevard and Rexford Drive. According to the Beverly Hills Police Department, the protest continued for several hours and blocked car traffic on some streets, but when the group turned onto a residential portion of Rexford Drive, police enforced the city’s ordinance against loud protests of more than 10 people in residential areas at night.

By the end of the evening, 26 people had been arrested, 25 for combinations of charges for allegedly violating the ordinance, unlawful assembly and noise disturbances, according to Lt. Elisabeth Albanese of the BHPD. One person was arrested for allegedly trying to set fire to an American flag hanging from an office building at the corner of Canon Drive and Santa Monica Boulevard, Albanese said.

“I’ve been with the police department for close to 20 years and over the last two decades, there’s been a lot of protest activity, marches on a variety of issues and topics, and we’re very accustomed to dealing with those,” Albanese said. “We respect everyone’s right and desire to protest and respect their First Amendment rights. The city does have rules in place, and when the line is crossed and multiple warnings are given and ignored, you force our hand to take enforcement action by way of arrest.”

The group behind the protest, the Black Future Project, was also behind the Occupy BLM protest on the residential North Alpine Drive on June 12 that spurred the city’s ordinance to ban loud nighttime protests on residential streets. 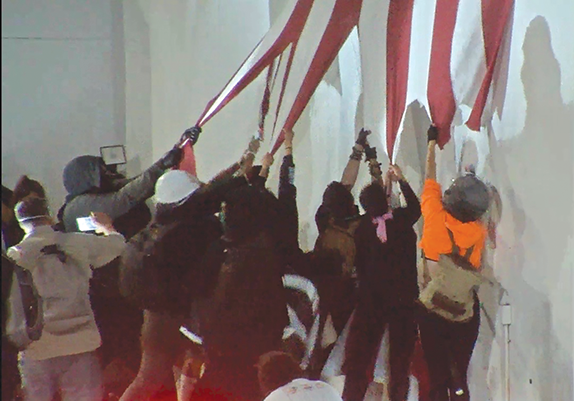 Protesters tore an American flag at Canon Drive and Santa Monica Boulevard, police said, and one protester was arrested for allegedly trying to burn the flag as well. (photo courtesy of the Beverly Hills Police Department)

James Butler, a founder of the Black Future Project, which is also conducting a protest camp at Grand Park near Los Angeles City Hall, said his group was aware of the city’s ordinance against noisy protests in residential areas at night, and he and his fellow protesters are “sick of them silencing our voices” to protect wealthy people, because “they’re the people who need to hear” the BFP’s message most.

Butler and Krizia Berg, another founder of the BFP, added that the person who was arrested for the alleged arson was not a member of the BFP.

“We have no idea who that was,” Berg said.

Butler and Berg said they took issue with some of the ways the protest and arrests were framed by the BHPD, and what they said was inappropriate conduct by some of the officers.

For instance, Berg and Butler alleged that some of the BHPD officers were not wearing masks or face coverings to help prevent the spread of COVID-19. Albanese said the department has “a mandate that the officers wear masks.”

Butler and Berg, who were among those arrested, also said they found substandard conditions in jail. Butler said in his cell, the sink was broken, so he did not have access to water. Berg said her blanket smelled like urine and was infested with bedbugs, some of which bit her.

Albanese said she finds it “very unlikely” that sinks would be broken or there would be dirty conditions in the jail.

“If there was any sort of issue with plumbing or cleanliness or anything along those lines, it would be addressed,” she said.

Albanese added that the jail’s linens are processed by an outside professional cleaning company that services large organizations such as hotels, “so I think it’s pretty unlikely that there were any cleanliness issues or infestation issues.”

Albanese said the long time in custody was due to “combination of factors,” including the number of people who had to be processed at once and the fact that once in custody, the identity of each arrestee must be confirmed and police must ensure there are no outstanding warrants before the booking process can begin.

“There are so many bookings to be done at the same time, and then there’s just a normal waiting period for any booking. It’s not an immediate release from custody,” Albanese said.

Berg said she has been arrested before while protesting and was never held for such a long time, which she called “unnecessary and irrational and a punitive measure.”

Berg, a transgender woman, added that while “a number of [police officers] did try to be respectful,” she was asked questions about her genitalia and sexuality during her detainment and processing.

“It’s humiliating and demeaning to be reduced to what’s between my legs,” she said.

Albanese said if a transgender person is arrested in Beverly Hills, they are given the option of being searched by male or female officers. Berg said her request for a female officer was not honored.

As a whole, Berg and Butler pushed back against the BHPD’s assertion in its statement that the department “works to ensure everyone’s safety while treating all with dignity and respect.” Berg noted that while she objected to the actions and words of some officers, many officers were kind and respectful, but she felt she was protected by her status as a white person and a veteran of the Marine Corps. Butler, who is Black, was more critical of the officers’ conduct.

“Absolutely not. There’s no dignity in anything that they did,” he said.

Butler and Berg say they also plan to continue protesting, including in Beverly Hills.

“Our plan is to continue protesting until our demands are met. Is racism done? Is white supremacy abolished? Then we’ll keep protesting,” Berg said.