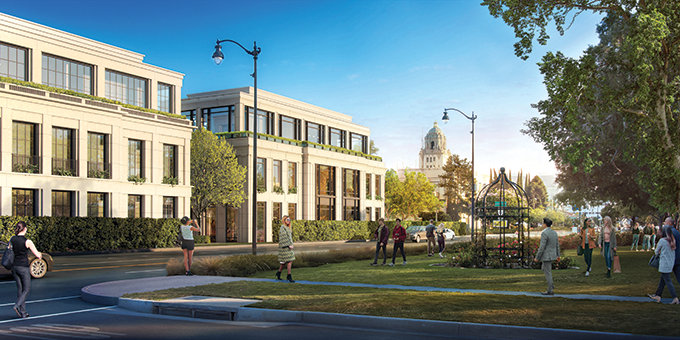 On July 13, the owners of Lots 12 and 13 fleshed out some of the details of their plan to build 11 office buildings on a strip of land between Civic Center Drive and Santa Monica Boulevard in Beverly Hills.

In a virtual meeting, representatives of the Beverly Hills Land Company, the owner of the property at 9220 N. Santa Monica Blvd., unveiled renderings and answered questions about the planned three- and four-story office buildings, which are expected to create approximately 114,000 square feet of office space for creative endeavors such as film and music companies.

The meeting included nearly an hour of Q-and-A, with the project team fielding dozens of questions via email and answering them live. However, Robbie Anderson, a Beverly Hills resident and vocal critic of the project, claimed in a call after the meeting that critical comments and questions were not fully addressed, such as his question disputing the location of the parking garage relative to Civic Center Drive.

“It was a fix … They didn’t want people chatting here. They shut that down. I don’t know who was on that call, the video [chat]. It was ridiculous,” Anderson said.

Anderson added that as the project moves forward, he thinks many of his fellow opponents will make their voices heard and the owners will be able to see how unpopular the project is.

“What I’m trying to do is nip this in the bud,” Anderson said.

Anderson will be pushing back against the BHLC, which purchased the property in 1998. In 2014, the BHLC was purchased by a group of Beverly Hills residents, including Lyn Konheim, who introduced the virtual event with his son, David Konheim. Other BHLC owners reportedly include Bob Barth and Stanley Black, who did not participate in the July 13 meeting.

“We all have lifelong roots in Beverly Hills, and we’re here to stay,” Lyn Konheim said.

David Konheim added that the buildings will fill a gap in the opportunities offered by Beverly Hills to businesses.

“There’s relatively little office space that has been developed in the city in the last 20 years … As a result, key media and entertainment companies have relocated to other cities,” David Konheim said.

“We’re optimistic that this project, because of its quality, because of its uniqueness, will garner the upper echelon of clients,” added land-use attorney Dale Goldsmith, a partner of Armbruster Goldsmith & Delvac, and a representative of the BHLC.

The buildings, which together will be known as the Beverly Hills Creative Offices, are planned for the westernmost parcel, a 2.1-acre plot known as Lot 12. The eastern half of the property, the 2.55-acre Lot 13 and the nearby median, will be given to the city of Beverly Hills.

“The city will be able to use this land at its discretion for any number of uses, such as a park to create an iconic gateway to the city,” David Konheim said.

The buildings, which range in size from approximately 2,600 square feet to nearly 3,800 square feet, will be spaced 30 feet apart on the 60-foot-wide strip of land, and on the ends of the office complex, landscaped areas will use eco-friendly plants and native trees, said the project’s architect, Andy Cohen, co-CEO of Gensler.

“We decided to create smaller buildings for many more courtyards, many more landscaped areas, and more permeability and visibility on the site,” Cohen said.

Cohen added that the buildings will be environmentally friendly, as they are planning to achieve LEED Gold certification.

“Everything will be looked at from a sustainability and innovation standpoint,” Cohen said. 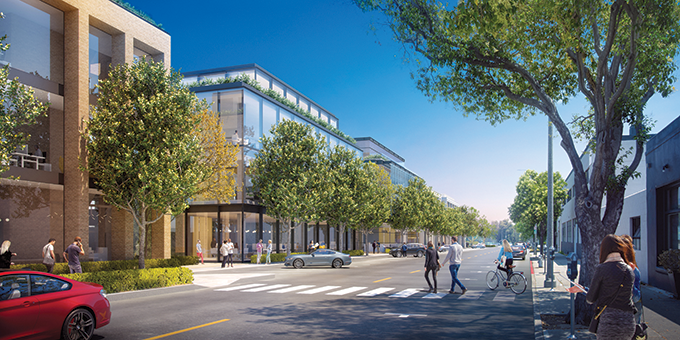 The project will have to overcome some hurdles. The property is zoned T for transportation, meaning it will require City Council approval to rezone the land for office use, and Lots 12 and 13 were once used by the Union Pacific Railroad, which left behind high levels of arsenic.

“The site will be cleaned up in accordance with a work plan that will be approved by the Department of Toxic Substance Control, the state agency that is in charge of cleaning up sites with impacted soil issues all across the state,” Goldsmith said.

Construction is expected to take two years, David Konheim said, and the BHLC plans to retain the property after construction is done.

“We are only at the beginning of the public planning process. We’re not likely to begin construction until at least 2022,” David Konheim said.

The project team said over the next few years, there will be more chances for public questions, comments and concerns, including in public hearings, meetings and in response to the environmental impact report.

“There will be many opportunities for additional input,” Goldsmith said.