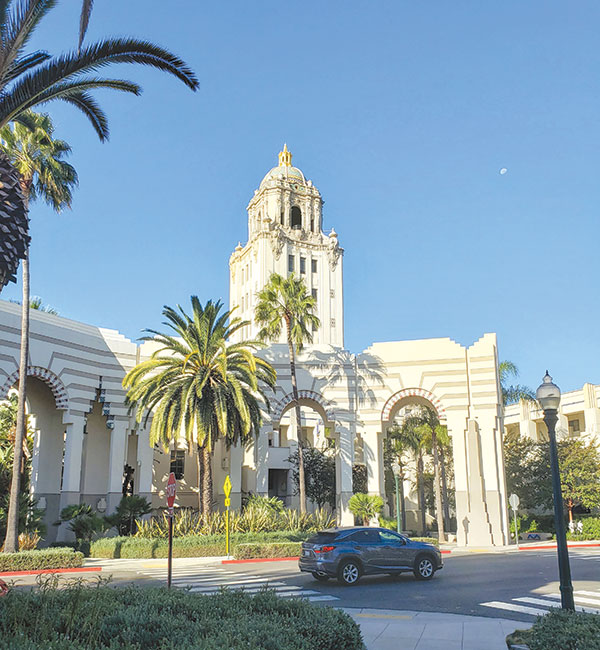 The Beverly Hills City Council wants to set up a program to provide relief to both renters and landlords during the COVID-19 pandemic. (photo by Cameron Kiszla)

During a study session on July 21, the Beverly Hills City Council took the first steps toward establishing a rental assistance program for Beverly Hills residents who have been struggling as a result of the coronavirus pandemic. The idea, proposed by Vice Mayor Robert Wunderlich, would be similar to the $100 million program enacted by the city of Los Angeles last month, though Beverly Hills, as a smaller city, would have $537,000 with which to work, including $217,000 from the Coronavirus Aid, Relief, and Economic Security Act, according to city staff.

Though no action was taken other than to provide direction to city staff, the council members detailed some of their broad goals, which include trying to help both landlords and tenants.

“As it stands now, if the tenants don’t pay the rent, it’s the landlords who are going to bear the burden of lost revenue,” Wunderlich said.

In an effort to help both, some council members said they’d like to find tenants in need of help whose landlords were smaller operations instead of corporations.

“We really want to help the mom and pops. That’s got to be the main goal, especially because we have limited resources,” Councilman John Mirsich said.

Mayor Lester Friedman added that the city should seek the “biggest benefit for the dollar.”

“Saving a landlord and saving a tenant together is the priority,” Friedman said.

Councilman Julian Gold also proposed helping those who could come close to making the rent, but could not quite get together enough money, as the money would make a bigger difference to them than it would someone who could not make their full rent payment, regardless of whether they received help from the city.

“This is almost a triage thing, a medical question, ‘who can we save?’” Gold said.

To help answer that question – and to try to prevent help from going to those who don’t need it – the council members expressed support for means testing both renters and landlords who would benefit from the program. City staff proposed that the program could be administered by Jewish Family Services, while Bet Tzedek would provide legal services and help landlords and tenants come to a repayment agreement. Council-woman Lili Bosse asked that the contracts with these organizations include privacy protections for the program’s renters.

“I feel quite certain that tenants would want to keep their confidentiality if they partake in that,” Bosse said.

The council members said they would like the program to begin relatively soon instead of waiting until the coronavirus pandemic has subsided. While waiting would better reveal those most in need of help, people are currently struggling, several council members said, and there’s no guarantee of when the pandemic will end.

“If landlords are suffering now, why would we wait to make some payments to them?” Wunderlich said.

Council members also proposed some tweaks to the city staff recommendation. Mirisch added that he’d like to see an additional $1 million of city money used in the program. Gold suggested that the program could prioritize students and families of Beverly Hills Unified School District students and teachers. Bosse suggested that this program could outlast the COVID-19 crisis and continue to help struggling renters in the city for years to come.

“I do think that this is something we need to have as a permanent program in our community,” Bosse said.

With their direction given to staff, several council members admitted that the process would likely be a complicated one, and they would be walking a fine line between fairness for all involved and simplicity.

“This is still a work in progress … We certainly have concurrence, if not unanimity, that this is a program we’d like to go forward,” Friedman added.