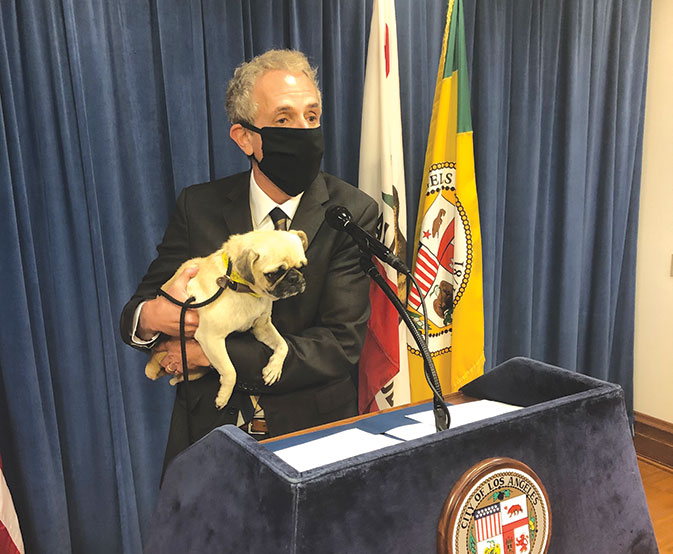 With fireworks shows canceled throughout Los Angeles County because of COVID-19 restrictions, authorities are worried about people setting off illegal fireworks in residential neighborhoods, a problem that has been occurring throughout the city in recent weeks.

Law enforcement and fire department officials are on high alert for illegal fireworks, especially with Independence Day being observed on Saturday, and warned about the dangers to people, property and pets.

“Almost every corner of L.A. is facing what seems like an enormous increase in illegal fireworks activity when so many of us are already on edge because of the virus,” Los Angeles City Attorney Mike Feuer said. “Between the very real risk of injuries and the unacceptable impact on veterans with PTSD, kids with special needs and our pets, the nightly onslaught of illegal fireworks we’re experiencing needs to stop.”

Officers from the Los Angeles Police Department’s Wilshire Division have been focused on the problem, with some being assigned to target specific areas where police have received repeated reports of illegal fireworks, including Hancock Park. Capt. Shannon Paulson outlined the approach in a written message to the community.

“Please know this will be a zero tolerance enforcement. Fireworks of any kind are illegal in the city,” Paulson said. “My officers cannot and will not distinguish between someone who has been terrorizing the neighborhood on a nightly basis with illicit commercial grade professional fireworks and someone who happened to light off the pretty safe and sane Roman candle to make their 5-year-old happy. We cannot and will not play favorites. They are all illegal because they all pose an unreasonable danger in our city environment.”

Los Angeles Fire Department spokesman Nicholas Prange said the goal is to ensure public safety, and he reiterated that the danger from illegal fireworks is real. Before his current assignment, he worked as a firefighter and paramedic for the department, and saw first-hand the injuries fireworks cause.

“People try to do it to celebrate but a lot of them end up in the hospital,” Prange said. “We hate to see all these injuries and fires out there. We are putting out the message that all fireworks are illegal.”

Feuer held a video press conference on June 25 to outline steps being taken to combat illegal fireworks. He is targeting online and mobile marketplaces where fireworks are sold and sending cease and desist letters to companies. Following investigations and outreach by the Los Angeles City Attorney’s Office, Facebook Marketplace, Craigslist, Letgo and OfferUp have agreed to remove specific fireworks-related posts highlighted by prosecutors, redouble efforts to remove all posts offering fireworks for sale from their platforms and cooperate more closely with authorities.

Feuer also outlined how illegal fireworks impact communities. Beyond the dangers to the individuals setting them off and those around them and fires they can cause, illegal fireworks take a toll on community members. He cited statistics from the U.S. Department of Veteran Affairs that up to 20% of military personnel who served in Iraq or Afghanistan experience post-traumatic stress disorder, or PTSD, which sudden loud noises can trigger.

Brenda Barnette, general manager of L.A. Animal Services, added that illegal fireworks are harmful to pets. More dogs run away and get lost around Independence Day than any other day of the year. L.A. Animal Services has taken in over 1,000 lost pets during the week of the holiday in recent years.

“Loud noises like fireworks are no fun for animals. A scared dog or cat can quickly slip through an open door or a tiny break in the fence and get lost,” Barnette said. “Fireworks have other risks for animals too. They can cause burns or be ingested, which can be fatal. Please keep your animals safely indoors in a room, play soft music and give them a few of their favorite toys. They’ll like it even better if you stay safer at home with them.”

Authorities ask people to call their local law enforcement agency to report illegal fireworks. Paulson said to include street names and block numbers if possible so limited resources can be devoted to problematic areas. The city also encouraged people to file complaints by visiting complaint.lacity.org/complaint/fireworks.

The Los Angeles Police Department also accepts illegal fireworks without penalty from people wishing to turn them over to authorities. For information, call (877)ASKLAPD.