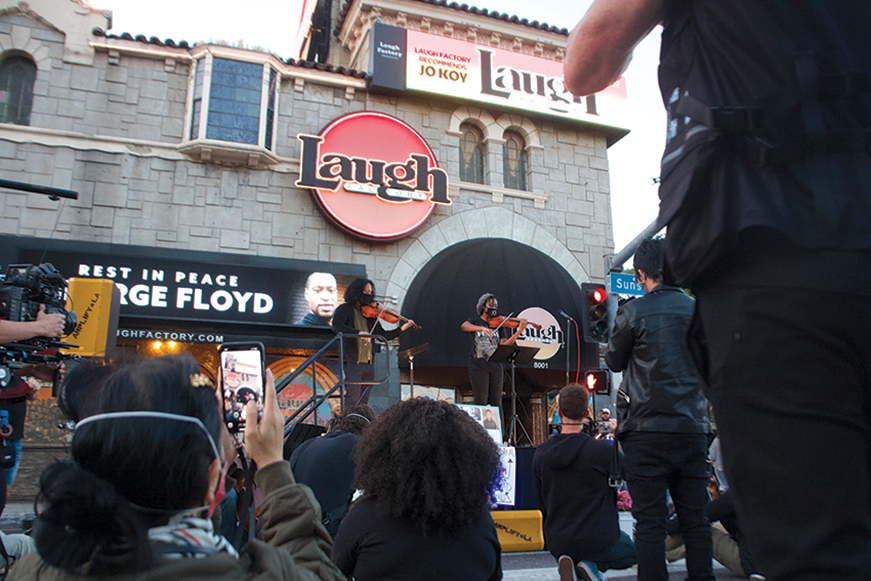 On Monday evening in front of the Laugh Factory on Sunset Boulevard, more than 100 hundred people gathered, masked or wearing face coverings, for the Violin Candlelight Vigil for Elijah McClain, a 23-year-old Black man who died in police custody in 2019 in Aurora, Colorado.

According to media reports, McClain was on his way home from a convenience store on the day he was arrested and was wearing a ski mask because he had anemia and sometimes got cold. He was unarmed and listening to music. Police officers were called about a suspicious person.

“I woke up on Sunday and all day I couldn’t get Elijah off of my mind so I decided to reach out,” Shannon Morton, founder of Black Women Lead, wrote in an email. “I sent @JusticeforElijah a DM explaining who I was and just asked if there was anything I could do. One of their organizers got back to me and encouraged me to join in the multi-city vigil.”

Within a day, Morton had reached out to her network of friends. She organized musicians Crystal Alforque, Sudan Archives, Veronica Camille Ratliff known as V.C.R., Chris James and Lindsey Sterling to play their instruments in memory of McClain, who was known to play his violin for anyone who would listen.

“Elijah had taught himself to play the violin,” Morton said to the crowd of people gathered at the vigil. “He had so much discipline and strength. With all the things going on in the world, it would have been a really nice feeling if you bumped into Elijah on the street.”

Morton read Elijah’s last words because those words speak to his character and the goodness he stored in his being, she said.

“‘I can’t breathe.’ I have my ID right here. My name is Elijah McClain. That’s my house. I was just going home. I’m an introvert. I’m just different, that’s all. I’m so sorry. I have no gun,” Morton said.

She added there was a desperate need for space to come together and grieve, heal, laugh and cry, which the vigil accomplished.

“We shouldn’t have to lose another Elijah. The world deserves more Elijahs,” Morton said. “We have to keep this intensity going to get justice for Elijah, and justice and equality for all.”

Sterling, a violinist and performer, was on a plane when Morton called and asked her to attend the vigil. Sterling described McClain as a pure person and dedicated her performance of “Between Twilight” to him.

James, whose artist name is Hellastrings, was vital to the vigil’s success, Morton said. James connected Morton to the Black musicians who performed Monday evening.

“I relate to Elijah because I’m also an introvert. I play the violin and I’m a quiet person,” James said. “It’s crazy that he was walking home from the store and some guy from an apartment saw him dancing and listening to his headphones and thought that was strange. Strange enough to call a person with a gun to see what he was doing.”

James improvised on his violin and his music captivated the crowd.

Morton said it’s important to create a safe space where people can learn, listen and protest. These are spaces curated to maximize visibility of underrepresented people whether they are LBGTQ, Dreamers or Black people, she added.

“It was a night I’ll never forget,” Morton said. “The vibration and the energy was unlike anything I’ve ever experienced and I’m pretty sure that’s because Elijah was looking down on us with that big smile and contagious laughter.”