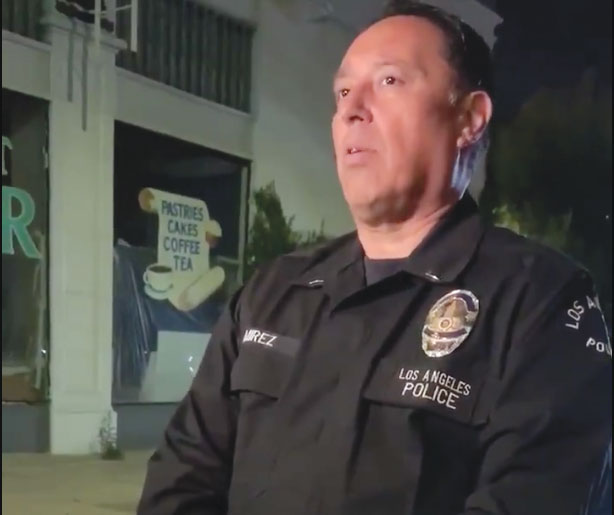 LAPD spokesman Chris Ramirez provided details about the homicide and officer-involved shooting that occurred on Wilton Place. (photo courtesy of the LAPD)

A 28-year-old woman was arrested and booked for allegedly murdering another woman on May 31 at a residence on Wilton Place, near Melrose Avenue.

At approximately 9:25 p.m., officers responded to a 911 call about an assault at a residence in the 600 block of North Wilton Place. Officers allegedly found the suspect, Sandra Ochoa, on the front porch stabbing the victim, police said. They ordered her to stop, and when she didn’t, officers shot Ochoa in an attempt to save the victim’s life, said Los Angeles Police Department spokesman Chris Ramirez.

Paramedics took the suspect to a hospital in stable condition and she was later booked for murder. The victim was pronounced dead at the scene. A bloody pen and bloody scissors were retrieved at scene as evidence, police said.

Authorities did not identify the victim or provide any information about her. Media reports stated she was in her 80s. Police provided no information about whether the suspect and victim knew each other or the nature of their relationship.

LAPD spokeswoman Norma Eisenman said the homicide was unrelated to civil unrest occurring in Los Angeles. Further details were not provided because it was an officer-involved shooting, added LAPD spokesman Drake Madison.

The LAPD’s Force Investigation Division will oversee the inquiry into the officer-involved shooting, as is standard protocol with all such incidents, and the West Bureau Homicide Division will investigate the homicide. A representative from the Office of the Inspector General also responded to the scene because it involved an LAPD officer. The Los Angeles County District Attorney’s Office will also review the investigation, and the findings will be presented to LAPD Chief Michel Moore for review.

Authorities will also present information about the homicide to the District Attorney’s Office for the filing of formal criminal charges against Ochoa. Anyone with information is urged to call detectives at (213)382-9470.

This article was updated at 2:33 p.m. on June 4 to reflect that Chris Ramirez is an LAPD spokesman.