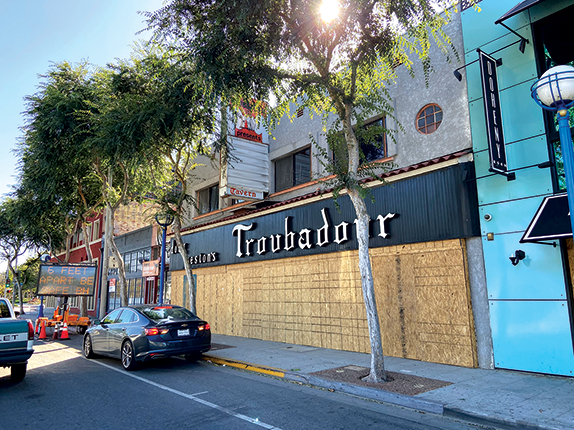 The Troubadour, a historic venue where many have seen the rise of stars such as Elton John, the Eagles, the Mamas and the Papas, and more, is temporarily closed amid the coronavirus pandemic. (photo by Edwin Folven)

As the state of California begins to slowly reopen, larger gathering spaces such as nightclubs, auditoriums and live audience concert and sports venues will remain closed until Phase 4, or the end of the stay-at-home order, of California’s Pandemic Resilience Roadmap.

In West Hollywood, City Councilwoman Lauren Meister, in an effort to assist businesses that would open in Phase 4, introduced an item on June 1 directing staff to develop strategies to help legacy businesses and legacy districts in the city recover from the economic impacts of the coronavirus pandemic. The item was approved on the City Council consent calendar and staff was directed to move forward.

“In addition to high rents, these businesses, like many others, are dealing with the challenges brought on by COVID-19 health crisis,” Meister said. “As we all know, recovery will be a slow process. Opening back up requires strength, ingenuity and patience.”

In a staff report, a “legacy business” was defined as a business or nonprofit organization that has operated in the city for 30 years or more, has contributed to the city’s history or identity, and is committed to maintaining the physical features or traditions that define the business, including craft, culinary or art forms.

“Legacy businesses are the small businesses and nonprofit agencies that have been in the city for years and have created or supported the unique identities and distinct characteristics of our commercial areas such as the Rainbow District (a.k.a. ‘Boystown’), the [Sunset] Strip, and the east side of the city, where the small mom-and-pop stores have served our Russian-speaking community,” Meister said.

Under the City Council’s direction, staff will look into possible policy and zoning changes that could include establishing legacy districts and placing limits on the number of retail chains permitted in them. A grant program or a low-interest loan for these businesses might be included, and city staff will return with strategies at a later date.

The city will also be looking at what other cities have done, Meister said. She described how San Francisco approved the formation of a cultural district in the Castro District to preserve the neighborhood’s LGBTQ+ heritage.

“Cultural districts can create city-funded strategies and allocate grants to preserve the unique history of a neighborhood,” Meister said.

Meister said this is one of many ways the city has worked on supporting small businesses. During the health emergency, the city has approved a number of temporary actions such as a moratorium on evictions, and allowed extended hours and businesses to expand their spaces into outdoor areas so they can successfully reopen under Los Angeles County guidelines, she added.

Councilman John Duran, who supported the item, said the city will work with partners such as the West Hollywood Chamber of Commerce, the Los Angeles Gay & Lesbian Chamber of Commerce and the Russian Advisory Board to identify legacy business and help brainstorm possible solutions.

He said legacy businesses have suffered economically and added that some business owners have told him that when they reopen, they are fearful patrons won’t come back because of COVID-19.

So far, approximately 100 legacy businesses have been identified including popular venues such as the Troubadour, Traktir, Mother Lode and the Whisky a Go Go that could benefit from city assistance.

“We want them to survive, and by just doing Zoom calls or online concerts will not be enough,” Duran said.

Meister said city staff will need to conduct outreach to the business community then the city and its community partners will present any new information to the appropriate commissions for feedback and recommendations before returning to City Council.