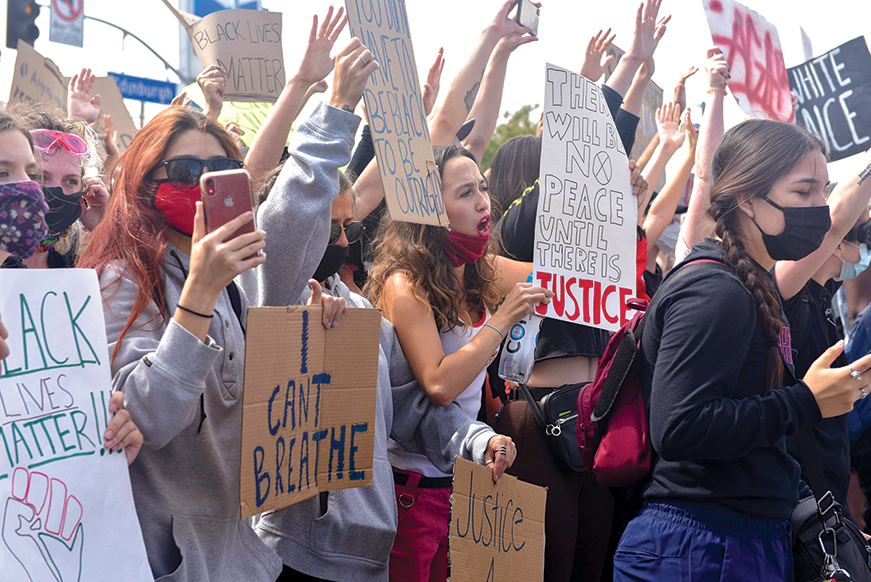 On May 30, Black Lives Matter organized demonstrators in protest of the death of George Floyd. (photo by Samantha Bravo)

The city of West Hollywood enacted an emergency order during a City Council videoconference on June 1 that established a flexible citywide curfew in response to protests over the killing of George Floyd, a black man who died at the hands of police in Minneapolis, Minnesota. That curfew was canceled on June 4.

Floyd’s death sparked national outrage and spurred protests throughout the country and Southern California. The order enables city officials to enact a flexible curfew that they may evaluate each day based on the city’s values and information provided by law enforcement, said assistant city attorney Lauren Langer. The curfew on June 3 started at 9 p.m., but previous curfews this week started earlier.

“I want everyone at home to realize that imposing a curfew is something that the city takes seriously, and we balance both our city values and the need for public safety when we do that,” Langer said.

The curfew does not apply to the Los Angeles County Sheriff’s Department, firefighters, other emergency personnel, members of the media, or people traveling to and from work. City law enforcement and authorities working with the city can arrest and charge individuals with a misdemeanor who violate the curfew.

Paul Arevalo, city manager and director of emergency services, implemented an initial curfew order on May 30 after disturbances and instances of violence, including people throwing rocks at the West Hollywood Sheriff’s Station.

This included a tense standoff between police and protesters in the Fairfax District south of West Hollywood and Beverly Hills on May 30. Thousands of protesters organized additional protests along Sunset Boulevard and Laurel Avenue, and La Cienega and Santa Monica boulevards the same day.

Looting, fires, graffiti, broken windows and other damage and disturbances occurred in West Hollywood, Beverly Hills, Santa Monica, Los Angeles, Long Beach and other areas throughout the county over the weekend, and in some areas during the following weekdays. However, city officials said less criminal activity occurred during midday protests on Monday and Tuesday.

Langer added the city intended to impose only a late afternoon curfew to leave opportunities earlier in the day for protesters to make themselves heard.

“Systemic racism has been prevalent for way too long and a part of the U.S. culture,” Councilwoman Lauren Meister said. “For Eric Garner and George Floyd, all black Americans who were killed before and in between, we need to change.”

Councilman John Duran said he was grateful to the city’s sheriff’s department, public safety personnel and Arevalo for protecting West Hollywood residents. He added city staff and city officials had discussions on how to best protect protesters, residents and property within the city while denouncing criminal activity.

“We support anybody that has suffered from oppression and we need to continue that,” Duran said. “At the same time, we have to focus our law enforcement forces on the antagonists, anarchists, white supremacists and others who would attempt to infiltrate the ranks of BLM (Black Lives Matter) and supporters in order to create disturbances and anarchy, broken windows and criminality.”

Mayor Pro Tempore John Heilman agreed with Duran and stressed the importance of differentiating between those who are expressing views in a peaceful lawful manner and those who are engaged in criminal activity.

West Hollywood resident John Erickson, who is running for City Council this fall, called in during public comment to condemn institutional racism and violence. He was also thankful for first responders and individuals focusing on keeping the West Hollywood community safe.

“We’ll make sure we do it safely and securely by making sure that we’re all there for each other, and make sure that we can grieve and protest in ways we see fit,” Erikson said.

West Hollywood Mayor Lindsey Horvath mentioned June 1 is the start of Pride month and it’s usually a time in the city for individuals to come together as a community to celebrate the LGBTQ+ community in all its diversity.

She added it was important to remember that Pride began with protests and riots led by black, brown, trans and other LGBTQ+ leaders seeking change for their community.

“We all know Stonewall was a riot,” Horvath said. “No one is equal unless everyone is equal.”

Horvath said the outrage and pain people are feeling, and the various protests occurring affect everyone and not just one community, or one neighborhood, or one demographic. She also asked the council to adjourn in memory of Floyd, and the many other lives that have been lost due to police violence.

“The point of all this is that it’s got to stop,” Horvath said. “We are all part of the solution. We all have to be engaged and do our part.”

Update at 12:31 on June 4: West Hollywood canceled its curfew.

Volunteers come out to help the community