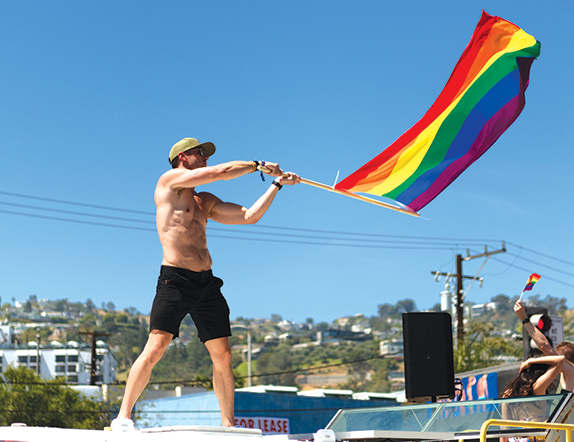 A man waves the LGBTQ flag during L.A. Pride 2019. The Supreme Court of the United States ruled employers cannot discriminate based on sexual orientation or gender identity on June 15. (photo by Jon Viscott/photo courtesy of the city of West Hollywood)

On the heels of a Trump administration decision to eliminate a rule protecting access to health care for transgender people, the Supreme Court of the United States made a historic ruling on June 15 protecting LGBTQ+ individuals from discrimination in the workplace.

“[June 15] is a historic day for the LGBT community with the decision at the United States Supreme Court,” West Hollywood City Councilman John Duran said. “I really thought I would never in my lifetime get to see this day when it became illegal, unlawful to discriminate against LGBT people in all 50 states.”

The ruling affirmed that employer discrimination on the basis of gender identity and sexual orientation violates the Civil Rights Act of 1964.

“To those who argue the Civil Rights Act of 1964 could not have foreseen questions of sexual orientation and gender identity, it is now decided that ‘the limits of the drafters’ imagination supply no reason to ignore the law’s demands,” Gorsuch wrote in the opinion.

“Federal courts have consistently determined that discrimination on the basis of sexual orientation and gender identity is unlawful under Title VII,” West Hollywood Mayor Lindsey P. Horvath said. “The landmark ruling affirms what federal courts and LGBTQ leaders across the nation have been loudly proclaiming for decades: that no person should be fired or denied employment for being lesbian, gay, bisexual or transgender.”

The SCOTUS ruling stood in stark contrast to the decision by the Trump administration to overturn a rule regarding the right to healthcare for transgender people. The United States Department of Health and Human Services’ decision to roll back anti-discriminatory rules for transgender people under the Affordable Care Act was bittersweet for members of the LGBTQ community celebrating the SCOTUS decision.

HSS will return to the government’s interpretation of Section 1557, which now defines sex discrimination to the literal meaning of the word “sex” as male or female and as determined by biology. Under a rule implemented by the Obama administration, Section 1557 was redefined as “one’s internal sense of gender, which may be male, female, neither, or a combination of male and female.”

“HHS respects the dignity of every human being, and as we have shown in our response to the pandemic, we vigorously protect and enforce the civil rights of all to the fullest extent permitted by our laws as passed by Congress. We are unwavering in our commitment to enforcing civil rights in health care,” said Roger Severino, director of the office for civil rights at HHS, in a statement that announced the changes to the Affordable Care Act on June 12.

“It is obscene that senior HHS official Roger Severino’s statement announcing the new policy included the words, ‘HHS respects the dignity of every human being,’” Jean said. “The truth is, the Trump administration has been working for more than three years to systematically disrespect, dehumanize and stigmatize some of society’s most vulnerable people. With all people of good conscience, we will strenuously oppose and actively fight this decision.”

Terra Russel-Slavin, director of policy and community building for the Los Angeles LGBT Center, said the HSS rule change was devastating and there is still much to fight for on many fronts, such as the trans community and black LGBTQ members like Dominique ‘Rem’mie’ Fells, Riah Milton and Tony McDade, who were recently murdered.

Russel-Slavin reinforced that certain states like California have policies in place providing protection for LGBTQ+ individuals against discrimination when seeking health care and health services.

Russel-Slavin noted that SCOTUS’ decision was a step in the right direction, as employment is tied to health care and access to health services. She said another progressive step would be for Congress to take more action and support the Equality Act.

In a statement, Feinstein said U.S. Senate Majority Leader Mitch McConnell (R-Ky.) should immediately bring the Equality Act to the Senate floor for a vote.

“This bill, which was already passed by the House, would amend the Civil Rights Act to strengthen protections for LGBT Americans in all aspects of their lives, including health care, education and housing,” Feinstein wrote in a statement regarding the SCOTUS ruling.

“We need Congress to pass the Equality Act,” Russel-Slavin said. “Congress must make more affirmative action and protect LGBTQ in all provisions of law.”