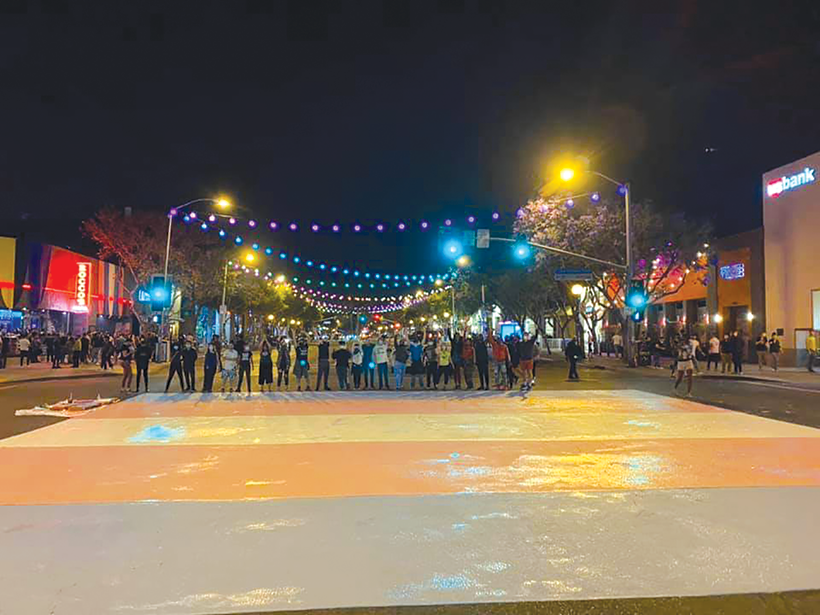 Protesters painted the transgender flag mural on the street at the intersection of San Vicente and Santa Monica boulevards for the All Black Lives Matter march. (photo courtesy of John Erickson)

The removal of a transgender flag, which was painted on the intersection of Santa Monica and San Vicente boulevards by activists for the June 14 All Black Lives Matter demonstration, has caused controversy in the city of West Hollywood.

Due to California state laws regulating traffic control, the city was unable to leave the painting of the trans flag in place, wrote Sheri Lunn, a spokesperson for the city, in an email explaining why the mural was removed.

She added the city must follow state laws establishing uniform standards and specifications determined by the California Department of Transportation, which prohibit signs or messages placed on the right-of-way by a private organization or individual. 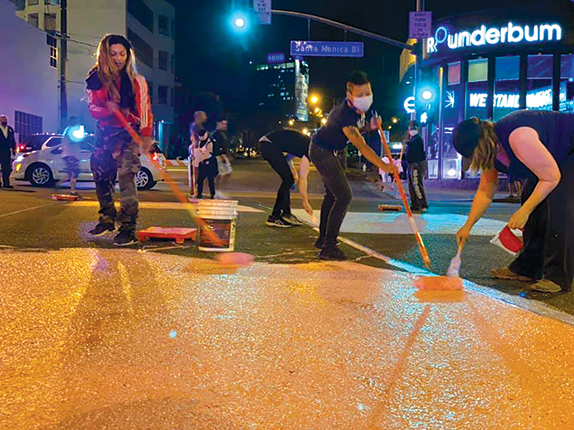 The transgender flag was painted in West Hollywood on June 13. (photo courtesy of John Erickson)

Thousands of people marched to West Hollywood on June 14 to protest police violence and show solidarity with the Black LGBTQ+ community, and were welcomed by the blue-and-pink striped trans flag mural at the intersection. However, the painting was done without a permit, concerning West Hollywood Councilman John Duran.

“We didn’t do that. Somebody in the middle of the night came out and decided to paint the center of our intersection without the city’s involvement, without any process or inclusion of any of the residents of the city of West Hollywood or our city government,” Duran said during a City Council virtual meeting on June 15. “I don’t think it’s right.”

Duran added the city of West Hollywood has paid tribute to the transgender community at Crescent Heights and Santa Monica Boulevard by flying the trans flag every day of the year, and he also noted the city’s transgender memorial service held annually in November.

“I don’t think we need to tolerate any group coming in and deciding what sort of painting or mural they wish to put on our public property,” Duran said. “If we allow this to happen, any group on any issues can take any intersection and decide to create art in our public streets without participation of our residents and our city government.”

Organizers of the All Black Lives Matter march created the mural the night before the planned protest. However, the debate regarding the painting of the flag intensified after it was discovered city officials and staff were present during the act.

John Erickson, a member of the city’s Planning Commission and a candidate in the Nov. 3 West Hollywood City Council election, was part of the group that helped paint the image.

“This action was clearly meant to lift up trans voices and visibility and stand as allies for the trans community, as trans people – especially Black trans women – continue to fall victim to violence and murder,” Erickson said in a statement.

“I believe it’s important to center trans voices in the conversation, and I hope West Hollywood will do more to include them in the conversation as we work to build a more just future,” Erickson added. “While painting the flag was not my idea, I support the action. While activists, advocates and others are out fighting to keep our transgender community alive, some seem to be more concerned with washing away advocacy, rather than fighting for Black trans lives and supporting all members of our community.”

West Hollywood Mayor Lindsey Horvath was at the scene, as were more than a dozen city commissioners when the mural was created. West Hollywood sheriffs were present as well, watching and ensuring the safety of demonstrators.

Horvath said she recognized the mural was not permitted by the city, and she appreciates West Hollywood sheriffs who “stepped up to protect our trans activists and their allies.”

“While I was present at the time, I did not participate in painting the transgender flag on the street, and in no way do I officially condone the defacement of public property,” Horvath said in a statement. “But I do stand firmly with the activists decrying the attacks that are being perpetrated against Black and trans people.”

She cited the recent murders of Riah Milton in Ohio and Dominique “Rem’Mie” Fells in Pennsylvania and Selena Reyes-Hernandez in Chicago, as well as the Trump administration’s attack on health care protections for transgender people have made it clear the attack on trans people of color continues to this day.

“West Hollywood has a legacy of fighting for human rights and social justice,” Horvath said. “Now more than ever, we must take action and direct our energy to protecting the lives of transgender people and people of color. I believe that’s what this action was intended to represent.”

Duran said he and a few of his colleagues, including City Councilwoman Lauren Meister, were shocked to find out city officials were involved in some way with the mural.

“City government can’t take a stand like that,” Duran said. “Any group of activists can do that, but we have to stay neutral. It makes it very problematic when city workers take a stand because it sets a precedent.”

Duran emphasized the issue was not with the trans flag or the trans community, but rather an issue regarding the First Amendment. If the city approves a message or mural such as the trans flag on city streets, then other groups that the city may vehemently oppose such as Trump supporters or supporters of the Confederate flag could say the city is censuring their freedom of speech if it disapproves of their message, Duran said.

“If we do want to do something permanent for the transgender community, then we go through our public process,” Duran said.

Duran’s viewpoints and comments about the trans flag mural drew criticism from the Black trans community group, Unique Woman’s Coalition. Chela Demuir, president and executive director of the organization and national vice president of FLUX, a national division of the AIDS Healthcare Foundation, wrote a letter titled “Hey John Duran” demanding his resignation and denouncing the councilman’s legal analogy between the trans flag and Confederate flag.

The flag was a statement to highlight trans murders and violence across the world, Demuir wrote in the letter.

“During this time of liberation and civil unrest, as Black people, we’re standing up to injustices and exclusionary systems all across the world. As a Black trans community, while the world observes Pride Month, we are fighting right in our very own city. With leaders who have affirmed that they will faithfully and impartially discharge the duties of the office, our communities find it sad and upsetting that such transphobic and discriminatory language would come from representatives of West Hollywood,” Demuir wrote.

In response to Demuir’s demand, Duran said come November when it’s time to vote, he encourages people to check the record of each candidate on what they’ve done for the trans community. Their actions speak for themselves, he said.

Lunn issued a statement that the city of West Hollywood is steadfast and passionate about supporting transgender and gender nonconforming people.

“The city is outraged by the disproportionate impact of discrimination and violence experienced by transgender and gender nonconforming people and the city is deeply committed to amplifying voices, to raising awareness, and to creating spaces for education and empowerment,” she said.