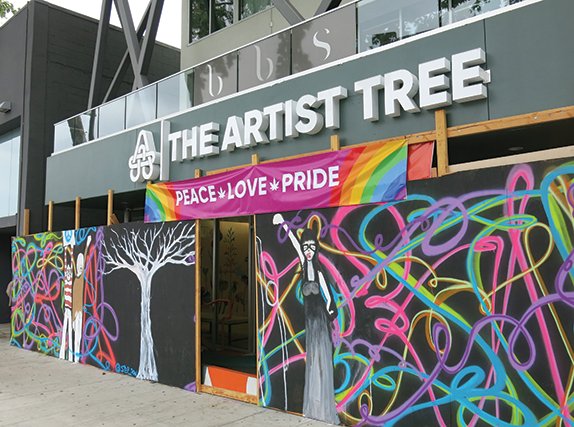 The Artist Tree is one of the eight members of the Adult Use Retailers Association of West Hollywood, which supports the Cannabis License Integrity Initiative. (photo by Cameron Kiszla)

On June 16, the West Hollywood City Council moved forward with placing a second initiative on the November ballot that could change the city’s rules regarding cannabis businesses.

The council directed city staff to prepare a ballot initiative that reflects the intentions of the Cannabis License Integrity Initiative, which did not gather enough signatures to appear on the ballot because its supporters stopped outreach in March when the coronavirus pandemic prompted stay-at-home orders.

The Integrity Initiative was created in response to the Close the Loopholes initiative, which would make more drastic changes to the city’s rules, such as letting the businesses that won licenses for edible-only consumption lounges allow smoking and vaping, and combining adult-use and medical retail licenses into one license type.

The Close the Loopholes initiative is supported by a coalition of “West Hollywood Originals” – the four dispensaries that were operating on temporary adult-use retail licenses but were given only medicinal, not adult-use retail, licenses in the city’s selection process – and permit winners for edible-only cannabis lounges, as well as UFCW Local 770, which represents cannabis retail workers.

Earlier this month, the City Council declined to enact the Close the Loopholes initiative, which garnered enough signatures to make the ballot, and instead decided to place it before the voters in November.

On June 16, the council members began the process of doing the same for the Integrity Initiative with a 4-1 vote.

The lone vote against the Integrity Initiative was Councilman John Duran, who said earlier this month that he would campaign on behalf of the Close the Loopholes initiative. Duran sympathized with the Integrity Initiative supporters, who were authorized to begin gathering signatures on March 12, only a few days before the COVID-19 orders impacted Southern California.

However, he said he didn’t feel comfortable putting the Integrity Initiative to the voters, because if the voters approved it, any necessary future changes to the ordinance’s stipulations would also have to be put to a vote.

“We’re dealing with an issue, cannabis regulation, that is so fluid and so changing, depending on state, county and local law,” Duran said. “To solidify or cement in a proposal by initiative that cannot be amended without going back to the people becomes highly problematic.”

Duran added that he thought putting two competing initiatives on the ballot would confuse voters.

Councilman John D’Amico said he believes voters are “smart enough to see through the rewriting of our ordinance,” and he believes the city’s ordinance is likely to prevail in November, though he hopes the supporters of the two initiatives and the city can come together to reach a compromise instead of taking the debate to the ballot. If both initiatives appear on the ballot and both receive more than 50% of the vote, whichever has more affirmative votes will be implemented.

“I do think that there are ways to pull this off to the side, find an off-ramp between now and election day, and I hope we do, but if we don’t, I think [the Integrity Initiative] should be on the ballot and I think it will get the most votes,” D’Amico said.

Mayor Pro Tempore John Heilman said he doesn’t believe this dispute should be settled at the ballot, as it’s within the council’s purview, but “unfortunately, we already have a measure that is going to the ballot.”

“It’s two competing sets of businesses trying to use our city’s processes to either preserve the advantages they already have or to gain an advantage against competitors, and I think most voters actually trust us to make this decision,” Heilman said.

Heilman, like D’Amico, thinks “there’s an opportunity for us to try to resolve the dispute,” though he noted he might be “Pollyannaish” in hoping the two sides can reach a resolution before August, when the ballot initiatives must be finalized.

Councilwoman Lauren Meister said if the Integrity Initiative’s idea to allow ownership changes was enacted, she would like to see all majority ownership changes of cannabis businesses go before the city’s Business License Commission for review.

“Something that was so important to us was knowing who these operators were going to be and that they were operators that go along with our core values,” Meister said.

Mayor Lindsey Horvath, who earlier this month expressed disappointment with the methods used by supporters of the Close the Loopholes initiative to get signatures – she said they used misinformation and “lied … to my face” – declined to take a position on the Integrity Initiative.

“I’m open to this moving forward and seeing where the language goes to see if I’ll be supportive,” Horvath said.

The ballot initiative language will likely come back to the council in late July or early August, Assistant City Attorney Lauren Langer said.