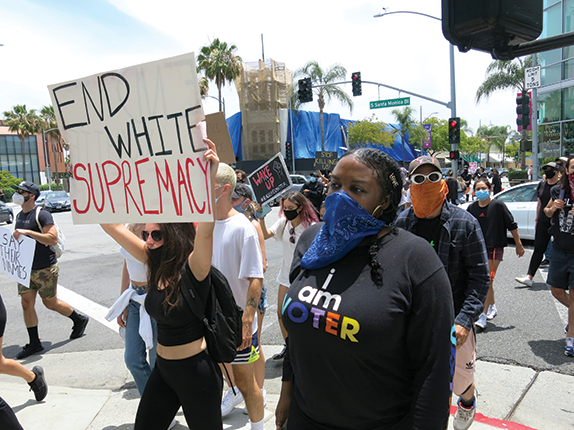 Los Angeles County District Attorney Jackie Lacey and Los Angeles City Attorney Mike Feuer announced on June 8 that no charges will be filed against the more than 2,000 people who were arrested for curfew violations, failure to disperse and failure to obey a lawful order during demonstrations during the past two weeks.

Lacey and Feuer, the top prosecutors in Los Angeles County and the city of Los Angeles, respectively, said punishing people who were arrested for non-violent offenses while at protests exercising their constitutional rights would be counterproductive on many levels. They remain committed to prosecuting people accused of violent acts, looting and vandalism to ensure they are held accountable, but are seeking creative ways to address the situation many others are facing in the aftermath of being taken into custody by police while attempting to peacefully spread a message.

“Because of the focus created by the peaceful protesters, we have a rare opportunity to change hearts, minds and institutions. We cannot squander this moment. It can no longer be us against them. We cannot continue to talk at each other. We must really listen to one another,” Feuer said. “Thousands of peaceful protesters whose only offense was a curfew violation, failure to disperse, failure to follow a lawful order or similar violation were arrested. We have yet to receive referrals from LAPD on these cases, but given the anxiety those arrested for these violations now feel, and the emphasis we as a community need to place on moving our city forward toward a more equitable and just future, I decided to issue a statement reflecting my values and those of my office, and offering a general perspective on how these matters should be handled. Rather than default to traditional prosecution, I see this as a moment to further focus on the deeply rooted, deeply felt issues at the core of the protests, to begin to find the common ground necessary for us to make progress, together, to renew our relationships and our institutions.”

Lacey said her decision not to prosecute individuals for curfew violations and failure to disperse was based on a desire to protect their rights.

“I believe whole-heartedly in free speech and support the right of protesters to demonstrate peacefully against historic racial injustice in our criminal justice system and throughout our nation,” Lacey said. “I want to encourage the exchange of ideas and work to establish dialogue between law enforcement and protesters so that we may implement enduring systemic change.”

Feuer added that while a non-punitive approach is being taken toward non-violent arrestees, he hopes to use the situation as a learning experience. Those who were arrested will be asked to participate in dialogues about underlying issues of racial inequality, bias and abuse. Participation will not be mandatory, but strongly encouraged. Feuer hopes protesters who were not arrested will also join the dialogues, which could help shape the future of how government functions in a more equitable way.

“In the next couple months, we will work with members of the community, our criminal justice and law enforcement partners, and experts in facilitation to develop alternative models that reflect this basic paradigm. We expect to begin implementing this approach later this summer,” Feuer said. “Our hope is that this restorative justice approach will be an ingredient in deepening the mutual empathy, understanding and respect that our city needs, perhaps serving as a model for other jurisdictions as well.”

The approach coincides with the city attorney’s office’s Community Justice Initiative, which allows for the resolution of low-level offenses outside of the courts. A program for individuals experiencing homelessness enables them to have citations removed from records if they accept resources to get them off the streets and into housing. Other city leaders said they support a non-punitive approach for the non-violent demonstrators.

“Powerful, peaceful, passionate protest is inseparable from the American identity. And I am proud of the thousands of Angelenos who have filled our streets to call for justice, cry out for change, and demand racial equality for black Angelenos and all communities of color,” Los Angeles Mayor Eric Garcetti said. “I fully support City Attorney Mike Feuer’s decision not to prosecute or seek any punishment for those who broke curfew or failed to disperse during the recent protests, unless those cases involve violence, vandalism or looting. This moment has the potential to bend the arc of our future toward a more fair and just city and country for everyone, if we’re willing to seize it. I hope Angelenos will stay engaged in the cause to bring transformational progress. That is how we will continue the hard, necessary work of rooting out racism from our institutions, policies, laws and communities.”

“Resolving these violations through alternative methods is a productive and appropriate way to address these offenses, and will have lasting positive effects on our community,” Los Angeles Police Department Chief Michel Moore said. “I fully support this approach to criminal justice reform, and will work closely with the city attorney’s office to ensure it is successful.”

Suspect charged for murder of elderly woman on Wilton Place