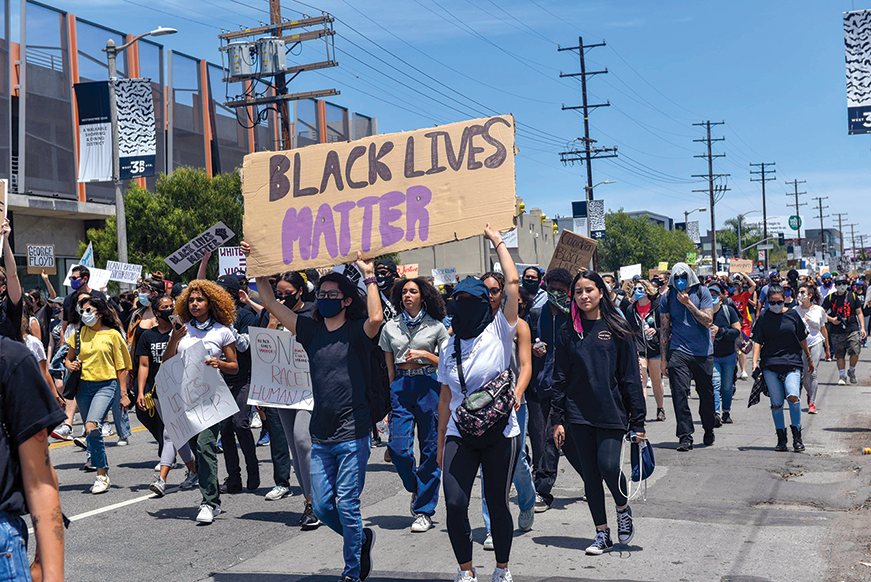 On May 30, Black Lives Matter organized demonstrators in protest of the death of George Floyd. (photo by Samantha Bravo)

Thousands of people demonstrated peacefully in Beverly Hills, West Hollywood, Hancock Park and the Miracle Mile on June 2 to protest the death of George Floyd, a black man who was killed by police in Minneapolis on May 25, and to protest the use of excessive force by police.

Demonstrators marched carrying signs in support of Black Lives Matter and chanting slogans such as “no justice, no peace.” The protesters included thousands of people from all races, creeds and orientations spreading the message that change is needed. Although there were reports of small numbers of arrests being made as the huge crowd of demonstrators moved through Hollywood on June 2, the demonstration was mostly peaceful and did not include major clashes with police, violence, vandalism and looting as occurred on May 30 following a march in Pan Pacific Park, according to police and organizers. A demonstration attended by thousands on Tuesday evening outside Getty House, the mayor of Los Angeles’ official residence in Hancock Park, was also peaceful.

Many community leaders have also demonstrated that peaceful protests can be meaningful while not resulting in violence or vandalism that harms the community. Los Angeles Police Department Cmdr. Cory Palka, who previously served as commanding officer for the Hollywood Division, joined demonstrators near Sunset and Crescent Heights boulevards in a show of solidarity. Palka got down on one knee and shouted, “we stand together” in unison with demonstrators. 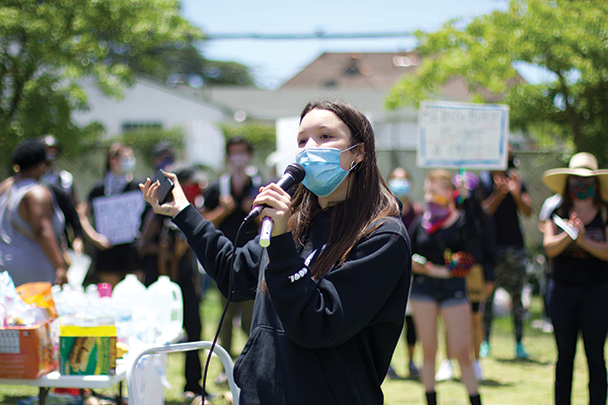 Immaculate Heart senior Cleo Riley has helped organize youth participating in the recent demonstrations, including a protest at Pan Pacific Park on May 30. (photo by Thibeaux Hirsh)

Los Angeles City Councilman Mitch O’Farrell, 13th District, said he stands with demonstrators and their desire to see meaningful change, and denounced the actions that led to Floyd’s death.

“The horrific murder of George Floyd in Minneapolis by a white police officer as three others assisted or stood by, exemplifies yet again the need for justice and fundamental changes to policing in this country,” O’Farell said in a statement. “Race should never be a factor when enforcing the law but all too often, that is not the reality. Our aspirations of reaching full racial equality have taken a devastating blow and people are angry. It will take resolve and inclusive collaboration to bring change. During this time of protest and pandemic, we must support and uplift one another. Angelenos, let’s lead by example, and show the country and the world that we can come together, listen and make real change. Everyone deserves a more fair, more just, more equitable America.”

O’Farrell, whose district includes Hollywood, added that some people have tried to use the protests as a means to commit crimes and destroy the community. During an earlier protest in Hollywood on Monday, looters raided the Rite-Aid pharmacy near Gower Street and Sunset Boulevard, and many other locations had graffiti scrawled and broken windows.

“We are obligated to do all we can to facilitate peaceful protest,” O’Farrell said. “But there have been looters, criminals and vandals who have tried to hijack these protests and muddy the waters, so to speak. We have to do everything we can to make sure people can protest safely.” 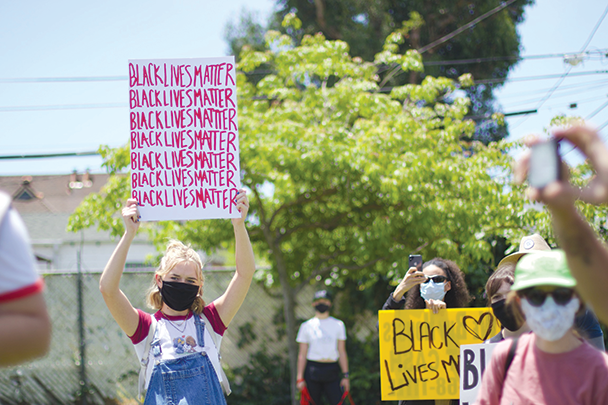 Other leaders, including Councilman Herb Wesson, 10th District, also denounced the violence against Floyd. Wesson called for the Los Angeles Council meeting on May 27 to be adjourned in Floyd’s name.

“The world saw George, an innocent, unarmed black man, killed in cold blood by the very people who were supposed to be protecting his safety and well-being,” Wesson said in a statement. “Seeing just one video like this is overwhelming, heartbreaking and infuriating. Seeing this kind of thing happen week after week for years on end in our country is exasperating and demoralizing. People have a right to be incensed. I pray George’s family finds justice and peace.”

“Meaningful change only comes when our voices are so loud we can no longer be ignored,” read a statement from Black Lives Matter-Los Angeles on Twitter.

“The demonstrations and the expressions of outrage have been phenomenal. The level of support is incredible,” said Akili, an organizer for Black Lives Matter-Los Angeles, who goes by a singular name. “Black Lives Matter has been fighting for justice for the families and police accountability. The other set of demands, particularly here in L.A., is defunding the police department. We are calling for an investment in universal resources and a divestment in the police department.”

Many publicly elected law enforcement officials have called for calm in the wake of Floyd’s death and the large demonstrations, including Lacey, Los Angeles County Sheriff Alex Villanueva and Los Angeles City Attorney Mike Feuer. The officials came together on June 1 to appeal to protest organizers to work with local leaders and to emphasize that change can occur when peaceful solutions are reached.

Immaculate Heart student Cleo Riley, a 17-year-old who will be a senior next year and will serve as student body president, helped organize the demonstration in Hollywood on June 2, as well as a peaceful protest on May 30 in Pan Pacific Park. Riley said she was horrified by the death of Floyd and felt a need to express her feelings. She quickly realized there was a much bigger situation unfolding and created StudentsForFloyd on Instagram to connect with her peers. Within two days of forming the group last week, there were more than 1,500 followers, many of whom joined Riley at the protest at Pan Pacific Park and on Tuesday in Hollywood, where she helped organize the protest that started at Hollywood Boulevard and Vine Street.

“I was looking for student-led groups that were showing support in the aftermath of the murder of George Floyd, and I decided, why not start my own organization on Instagram? It really took off,” Riley said. “Our goal is to show that peaceful protest is more effective than violence and vandalism. It’s getting a large group of students together and showing that we stand for good. We really are the future, we are going to be voting. I think it’s really important to get young people out there to show our viewpoints about policing and government.”

Riley said students, and many young people in general, understand the message that groups like Black Lives Matter are sending about unfair treatment by police, and want the same reforms they are seeking. She and fellow members of StudentsForFloyd plan to continue attending protests. Riley also said her group went to the Fairfax District on May 31 to help clean up following clashes with police and looting and vandalism that occurred in that area.

“We are trying to show people that it is possible to spread your message peacefully,” she added. “You can take action and get things done.”

Jewish community unites to clean up after protests