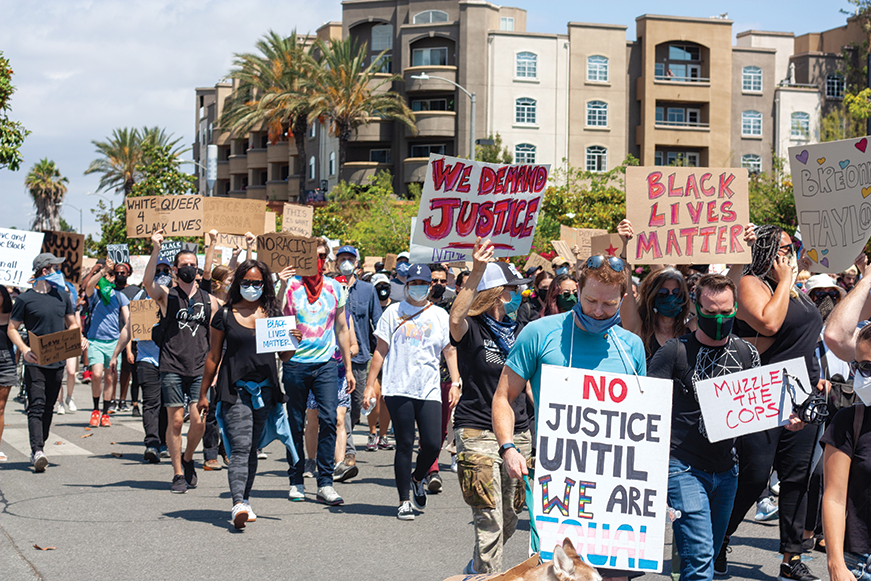 Protesters marched on Beverly Boulevard and Spaulding Avenue after a rally at Pan Pacific Park for #BirthdayforBreonna. (photo by Jose Herrera)

As public outcry continues over the death of George Floyd, a black man who died at the hands of police in Minneapolis, demonstrators have also highlighted the life of Breonna Taylor, a black woman who was shot in her home by Louisville Metro Police in March.

Los Angeles-based writer Shannon Morton, who has participated in protests over the death of Floyd, decided that she also wanted to address Taylor’s death and organized an all-black-women-led protest, #BirthdayforBreonna, on June 6 at Pan Pacific Park.

“That was my first solo event,” Morton said. “I have gone to a protest and my leadership was there. I thought I could lead one. I really felt the need to celebrate Breonna’s life.”

“Black women have always had to be the voice of America,” Morton said. 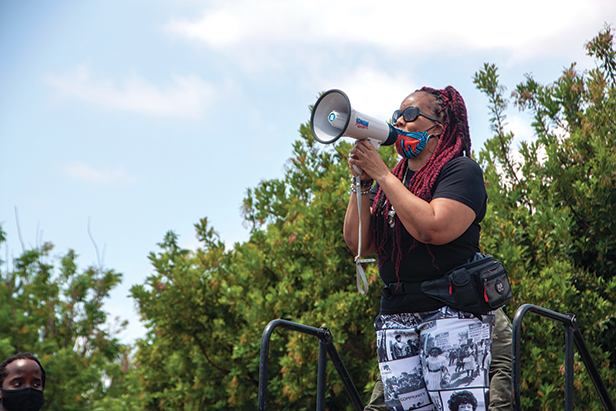 Lila Mayes, owner of Curvy Girls N Curls, spoke at #Birthday­forBreonna and asked Ange­lenos to stand with black people against the fight against racism. (photo by Jose Herrera)

Hundreds of people answered the call to commemorate the life of Taylor, who would have turned 27 on June 5. She said addressing the large crowd felt natural, and it was important because people of different backgrounds need to work together to dismantle systemic racism.

Speaker, writer and advocate Rashida Sheedz said when Morton asked her to join the protest for Breonna Taylor and all black women, she was eager to participate. Sheedz reminded the large crowd at Pan Pacific Park that no one group organized the event, but they, as black women, came together to make the protest happen.

Sheedz said the frustration, sadness and anger demonstrators saw and felt in the last week of protests for black lives are the same emotions black people feel every day.

Morton’s call to action was to demand justice for Taylor. She told demonstrators to continue to protest, protect each other and support black lives.

Morton also demanded city officials defund the police department. She referenced a recent announcement by Los Angeles Mayor Eric Garcetti about plans to cut the Los Angeles Police Department’s budget by up to $150 million, and hopes more money can be redirected to support black communities.

Nichelle Hines, an actor and board member for the Hollywood Food Coalition – a nonprofit that serves the homeless population and others in need – said the present moment has had a profound influence on her message. She asked members of the crowd who were 27 or older to raise their hands and to think about the love, friends, family, good moments and bad moments that have shaped their lives and future.

Hines said those under 27 are the “revolution” that will wake the world. She added that everyone in attendance must vote with the same energy they showed at the protest.

Other speakers, including Daheli Hall, Shantira Jackson, Lila Mayes and Rashawn Scott, addressed the crowd about Taylor’s death. Jackson, who wrote “Busy Tonight,” “3Peat Presents: The Blackening” and “50 Central,” spoke about the collective grief felt by many people of color.

“[Breonna], her family and friends had years of love stored up for her, but what happens to all that love?” an impassioned Jackson asked. “It doesn’t go away. There is grief in these bodies, and there are hashtags for some of the names [of women], but there is so much love in the hearts of black people for our people. We want it to be used fully.”

Derrick Riley, an architectural designer who lives in Venice, said he was most moved by Jackson’s words about the loss felt among Taylor’s family and friends.

“I’ve experienced my own grief enough to know what that pain is like, but it’s another thing to be forced into that grief repeatedly because of injustices upon black people by police,” Riley said.

Comedian and singer Scott finished the rally with her rendition of “Freedom” by Beyoncé. The protestors later marched from Pan Pacific Park to Beverly Hills in a demonstration that remained peaceful.

“I honestly was terrified to come out to protest,” Scott wrote on her Instagram page. “Scared for my life, scared for my people’s lives, scared that our peaceful protest would be broken up by hate. But I needed to come. I had to lend my voice because Breonna can’t. For the countless black bodies that have been taken.”