‘Paint Your Peace’ on Hollywood Boulevard 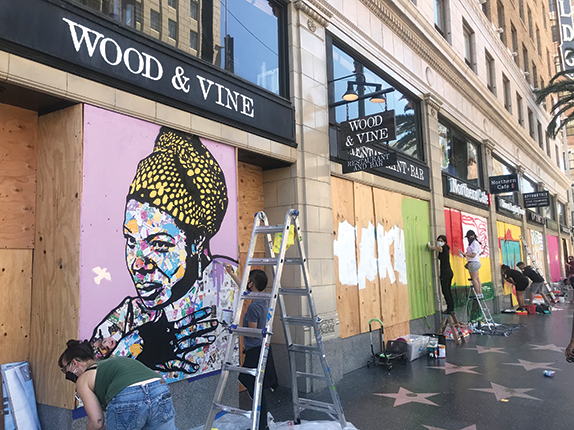 The corner of Hollywood Boulevard and Vine Street has been enhanced with art promoting peace, hope and solidarity. (photo by Jill Weinlein)

Last Sunday, June 7, a group of professional artists and volunteers painted messages of love, hope and solidarity on boarded up businesses near Hollywood and Vine.

Wally Moran, general manager of Wood & Vine Restaurant & Bar, boarded the front windows facing Hollywood Boulevard on the weekend of May 30. The boards were tagged with offensive messages, so he painted over them. When it happened again, he decided he needed a better plan. He reached out to his friend Georgia Van Cuylenburg, founder and organizer of Arts Bridge the Gap, a social justice organization. Together they organized “Paint Your Peace” to transform plywood boards into meaningful works of art. 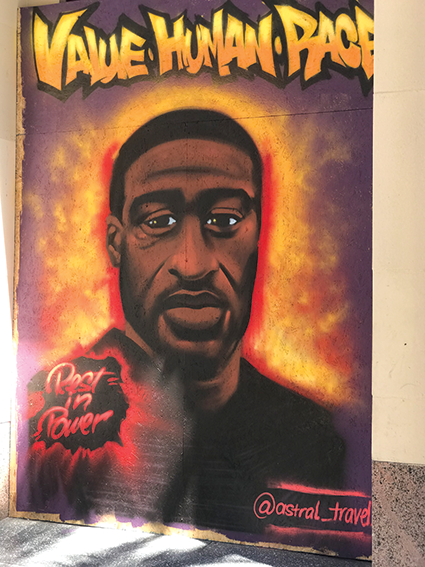 A mural honored George Floyd near the corner of Hollywood Boulevard and Vine Street. (photo by Jill Weinlein)

Starting at 10 a.m., over 25 people designed and painted colorful messages to promote a positive change for Hollywood and the world, before an estimated 100,000 people peacefully marched along Hollywood Boulevard. Organized by Black Lives Matter Los Angeles with BLD PWR, an organization that encourages activism by entertainers, and the rapper YG, it was one of the largest protests in Los Angeles.

“We added the boarded up Katsuya and the Hollywood and Vine Lift Building,” Moran said. “Wood & Vine is still closed, but will be hosting the artists for drinks here later.”

Moran added that when the boards come down and they reopen, the art will be displayed inside the restaurant.

“The Pantages Theatre said they want to do the same, and Georgia wants to do a show [promoting some of the painted plywood pieces] later this year,” he said. 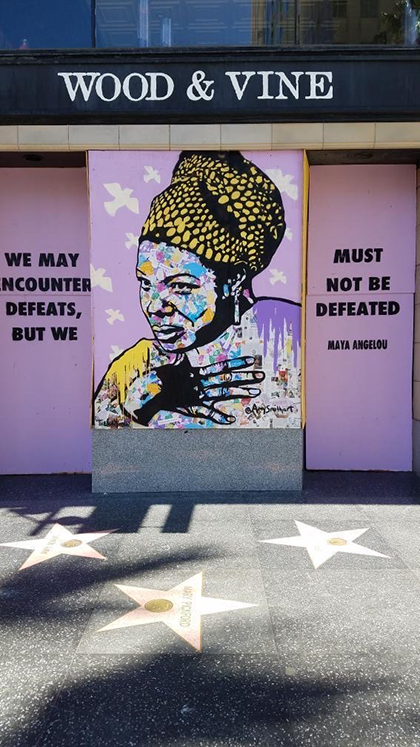 Below the Wood & Vine sign is a beautiful likeness of poet and civil rights activist Maya Angelou with her message “We may encounter defeat, but we must not be defeated.”

Moran texted one of his regulars, Angelou’s goddaughter, throughout the day, sending her progress photos of this powerful piece. Hopefully, she will come by soon to see her godmother’s message and raise a glass with everyone involved in “Paint Your Peace.”

Schiff defends journalists and affirms support for a free press