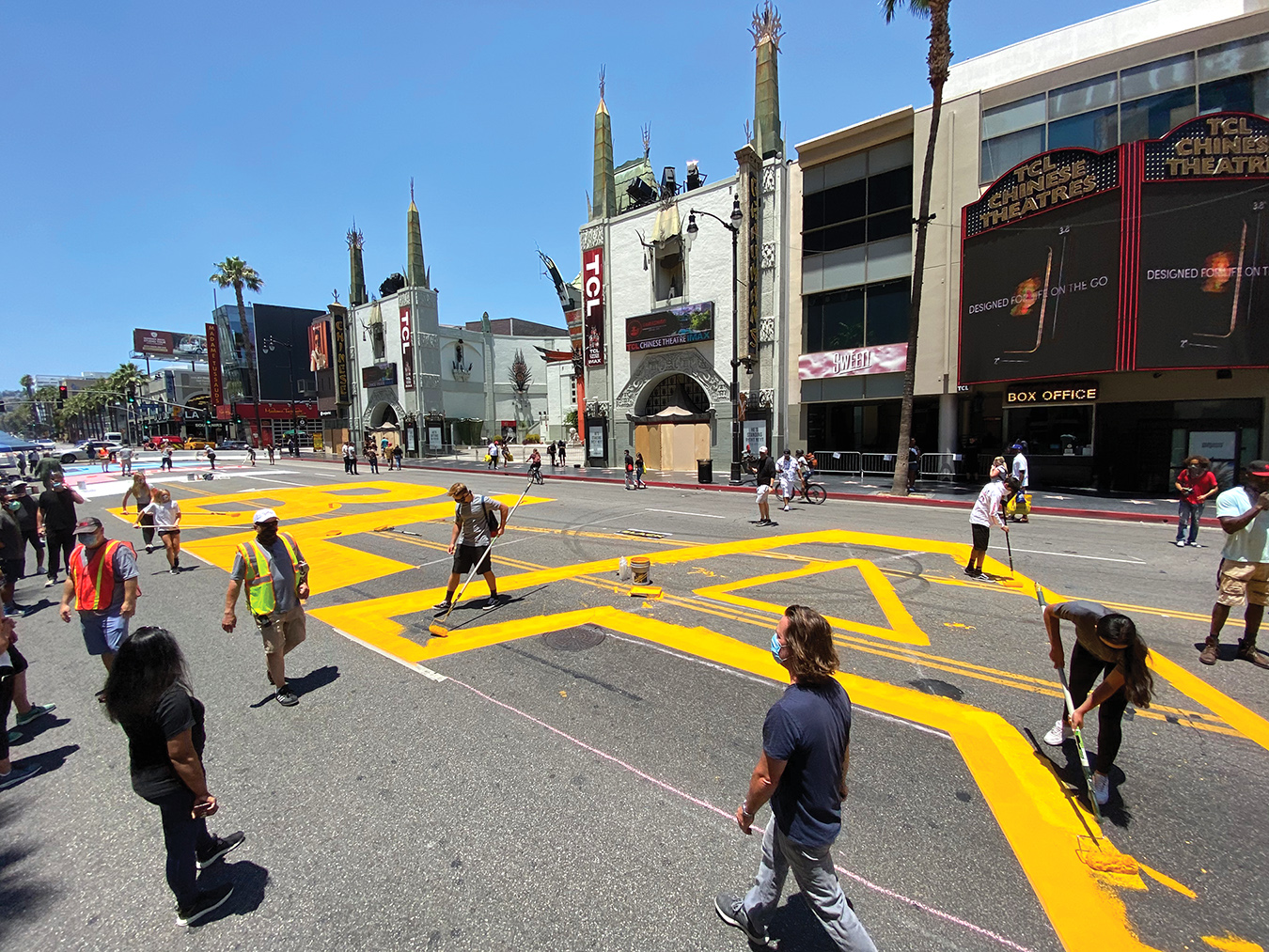 Volunteers painted “ALL BLACK LIVES MATTER” in massive letters on Hollywood Boulevard prior to the All Black Lives Matter march on June 14. (photo by Edwin Folven)

The day after tens of thousands of people gathered in Hollywood for the All Black Lives Matter march on June 14, Los Angeles City Councilman Mitch O’Farrell, 13th District, announced plans for a motion to dedicate a permanent space commemorating the cultural and historical significance of the protest.

“We had a once-in-a-generation moment this weekend in Hollywood as tens of thousands gathered for a peaceful demonstration on one of the most recognizable boulevards in America,” O’Farrell said. “We now have a chance to memorialize the movement in a meaningful way.”

The artwork was a collaboration between members of the Black LGBTQ+ Activists for Change, known as BLAC, and the Hollywood-based entertainment marketing company Trailer Park Group, led by CEO Rick Eiserman. O’Farrell partnered with the groups to have permits issued for the temporary “ALL BLACK LIVES MATTER” installation on Hollywood Boulevard, and on Monday, ordered crews to stop its removal. The letters are painted in the colors of the rainbow and transgender flags. The march was an opportunity for Los Angeles to stand alongside transgender and queer individuals in the black community, O’Farrell said.

“I’m so honored to have collaborated with Rick and Trailer Park Group and Councilmember O’Farrell’s office to install my design on Hollywood Boulevard,” added Luckie Alexander, a BLAC member who collaborated on the design for the artwork. “The art piece spoke to the intersections of being black, sexual orientation and gender identity that are included in this racial movement. It speaks volumes to the commitment our city has regarding inclusion and equity for the black community, especially our queer and trans community of color. As a black transman, our specific community has been continually overlooked, and this gives me hope that we will continue to be heard here in Los Angeles.”

“BLAC is centered on effective partnerships designed to bring visibility and action to the unique needs of Black LGBTQ+ communities. Efforts like this, designed by BLAC member Luckie Alexander, and in collaboration with Councilmember O’Farrell’s office, Trailer Park Group and all other partners and individuals that came together to make this happen is true proof of collaboration. And, for a new installation of some kind to live permanently becomes a symbol not just to the city, but to the world,” said Gerald Garth and Brandon Anthony, co-founders of BLAC and lead organizers of the All Black Lives Matter march, in a statement.