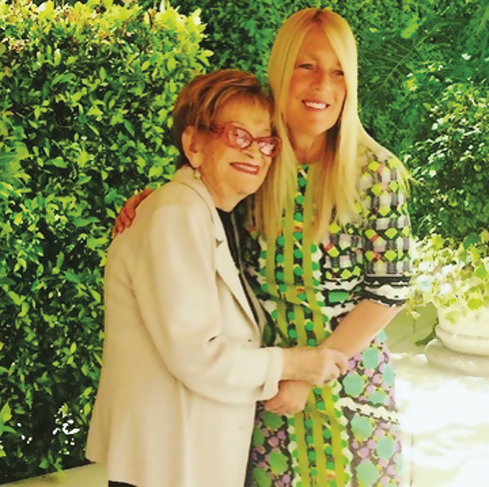 This year marked the 75th anniversary of the end of the Holocaust. In January, world leaders and Holocaust survivors convened in Poland to commemorate the liberation of Auschwitz. Other ceremonies for Holocaust remembrance in the U.S., however, have been disrupted by the coronavirus epidemic.

At the Los Angeles Museum of the Holocaust, located at Pan Pacific Park, CEO Beth Kean said the museum closed its doors to visitors on March 15 and staff began working from home.

That included the annual Yom HaShoah ceremony on April 19, which was held virtually instead of the regular location at Pan Pacific Park. While the attendance online of approximately 800 people was about the same as the annual in-person event, the online nature of the ceremony meant it could be recorded. Since it first aired, more than 4,000 people have watched a replay of the ceremony, Kean said.

The museum is also hosting virtual tours of the museum and weekly conversations with Holocaust survivors via Zoom, and schools that normally would send classes in person to the museum are watching live, allowing students to ask questions of the survivors. In what may be a silver lining of the pandemic, Kean said the virtual tours and online survivor talks have increased the museum’s reach.

“Maybe coming to the museum, we would’ve had one or two classes at once. Now we have the opportunity to go well beyond that. Maybe we’ll get 10 classrooms to join in for this customized virtual tour,” Kean said.

While the museum is closed, Kean said they’re working on adding a new technology that allows visitors to interact with survivors, even if the survivor has passed away or is not present at the museum. Dimensions in Testimony, produced by the USC Shoah Foundation, uses artificial intelligence to let people ask questions of survivors. DIT then pairs the questions with pre-recorded responses collected by the Shoah Foundation, which was founded by Steven Spielberg in 1994. While not all of the Shoah Foundation’s more than 50,000 testimonies are part of DIT, the videos play on a continual loop at LAMOTH.

“We’re really excited about this and we’re thinking that maybe, the museum is not opening until September, but depending on when this installation is done, we could set up a time-ticketing reservation system and have people come specifically for [Dimensions in Testimony],” Kean said.

Stephen Smith, executive director of the USC Shoah Foundation and a resident of the Fairfax District, said during the pandemic, the foundation has not been able to meet with more survivors to record their stories in person, but they’ve found a workaround.

“We send a camera to a Holocaust survivor’s home and … we interview them over Zoom or some other platform, and then we get the camera back and we’ve got a beautiful interview. It’s been amazing to be able to continue that work,” Smith said.

Since the youngest Holocaust survivors are now in their 70s – an age group that is very susceptible to severe forms of COVID-19 – it’s important to quickly record as many survivors as are willing to speak.

“It’s not for the sake of technology, it’s to tell the story in every way possible so we don’t miss that opportunity in the future. We’ve lost so many of them in the past few months, so there’s more urgency to that. We’re committed to making sure our own community and residents can tell the story while they can,” Smith said.

Smith added that while survivors can experience a cathartic relief after telling their story, it can be very painful for survivors to talk about their experiences. Smith said he makes an effort to avoid treating survivors as “storytellers and artifacts from the past,” because telling the story of Holocaust survival is “reliving the past that you never ever want to live.”

By collecting survivors’ stories in a format that is easily shareable, Smith, who studied Holocaust survivor testimony for his doctorate program in the 1990s, said the Shoah Foundation is allowing the Holocaust to become the “first history of atrocity and violence that is truly being told by those who went through it.”

“In terms of oral history, it’s the first oral history that’s being told by the victims. I see it as an archive of resistance in a way. The thing that Hitler wanted to do was wipe out all Jews everywhere, including the names. The Shoah Foundation has 1.8 million names in its database,” Smith said.

One of those names is Rose Toren, who escaped the death march from Auschwitz by hiding behind a barn. After World War II, Toren moved to Israel, then the U.S., where her daughter, Lili Bosse, now serves on the Beverly Hills City Council.

Toren passed away in 2015, but Bosse said when she watches her mother’s Shoah Foundation testimony, she is inspired and strengthened, especially during today’s trying times.

“I have found myself, during these last number of months which have been challenging, looking to her video. In her video, she says she looks up at the sky and sees clouds, but there’s sunshine through it. Even when there are hard times and cloudy times when humanity feels like it hasn’t learned anything, she believes in the goodness of people. As long as we don’t give up, we can survive it all,” Bosse said.

Bosse also said the stories of Holocaust survivors have lessons for today, a sentiment echoed by Smith. The killing of George Floyd by Minneapolis police has sparked a racial dialogue, and it’s important that the difficult issues that are raised be faced directly, Smith said.

“[Jews] were outsiders in their own countries, and the underlying racism about Jews in Europe was not addressed, and it became an ideology and it was not addressed, and it became a genocide, and 6 million Jews were murdered,” Smith said. “Those survivors become almost like guides. They know the roadmap of racism in society. They have the moral authority to say what will happen if you don’t deal with this face-on, and many of them speak directly on this issue.”

“For us, it was in response to what had just happened and it was really important to bring these community leaders together to start a dialogue and to ask the police chief some really tough questions,” Kean said.

The ability to quickly organize an event in response to Floyd’s killing and to have it reach a wide audience was enabled by the shift to the internet, Kean said.

The Shoah Foundation has also used technology to focus on larger racial issues, including a June 22 Zoom session with Smith, comedian and actor Mike Myers, and Holocaust survivor and educator Pinchas Gutter. Smith said they had an audience of approximately 1,000 students, showing how celebrities like Myers can use their “platforms to create social capital and social good.”

“It’s small steps, small things that you say and you do. If you don’t take some action and use your platform in a meaningful way, you’re missing an opportunity,” Smith said.

Bosse agreed that the growing online audiences of survivor stories is a blessing that emerged from the unfortunate aspects of physical separation, and she hopes a better understanding of the past can lead to a brighter future.

“If you understand the past, you have a better understanding of the current present, of where we are now. By understanding the past, it gives us the ability to shape our future. I believe it’s essential that we take every moment that we can to connect with those Holocaust survivors because there’s a tremendous amount of strength and integrity and values that can help us shape where we, as a world and as humanity, want to go. I think the way to do that is to go to their experiences to give us the moral compass and the roadmap as to how we can do that together,” Bosse said.

County explores ways to provide face coverings to the public