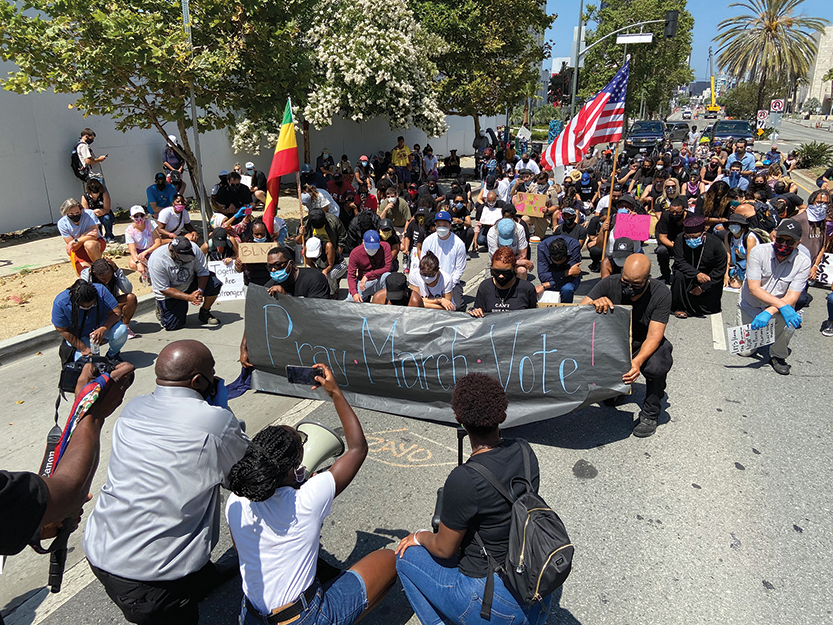 Protesters knelt in honor of black people who were killed by the excessive use of force by police during a June 13 protest. (photo by Edwin Folven)

Pastor Charles Johnson led the march, which began at the church at 1304 Cochran Ave. and proceeded along San Vicente Boulevard, Fairfax Avenue and Wilshire Boulevard before ending in the park surrounding the La Brea Tar Pits and Museum. Demonstrators carried signs in support of Black Lives Matter and chanted “No Justice, No Peace,” “Show Me What America Looks Like, This Is What America Looks Like” and “I Can’t Breathe,” in reference to George Floyd, who died at the hands of police in Minneapolis. They called out the names of others who have died, including Breonna Taylor, and made comparisons to Emmett Till, a black boy murdered in 1955 who served as a catalyst for the Civil Rights Movement.

As the group approached the La Brea Tar Pits, the protesters kneeled on one knee on Wilshire Boulevard, bowed their heads and prayed for an end to the racism, violence and hatred that exists in society. Wearing masks and observing social distancing, the protesters gathered at the end of the march in an outdoor amphitheater in the park to hear from leaders about the importance of speaking out against racism and injustice.

“A lot of people are saying, ‘why are we marching?’ A lot of people have noticed there has been civil unrest throughout our entire country. We are marching because Breonna Taylor can no longer march. We are marching because Ahmaud Arbery can no longer march. We are marching because Martin Luther King and Emmett Till can no longer march. Since they cannot march, we are marching for them,” Johnson said. “We are believing that in the Miracle Mile community, a miracle is about to happen. A miracle is a powerful statement or an extraordinary event, and throughout the entire country, we are witnessing an extraordinary event. We are seeing a miracle, the impossible becoming possible, the intangible becoming tangible. We are seeing those starved for unity because of apathy and silence speaking up now. That’s a miracle. The eyes of America have opened up now. That’s a miracle. A miracle doesn’t happen often in our country, but we are seeing one now.”

West Hollywood Mayor Lindsey P. Horvath and Los Angeles City Councilmen David Ryu, 4th District, and Herb Wesson, 10th District, joined the demonstrators and showed support. At the park, Johnson presented three initiatives to the civic leaders that he hopes will drive change in Los Angeles and throughout the country.

Johnson called for a “reconstruction” of the Los Angeles Police Department aimed at increasing officer accountability, a “uniform social, cultural curriculum” within police training focused on de-escalation and problem resolution, and an “unabridged human rights initiative” affirming the rights of all people, including people of color.

“We want to see a declaration of human rights. A right to live in this country without the fear of the color of our skin. An unalienable right that we can live in any community in peace and harmony,” Johnson said.

Wesson said he supports the message of reform conveyed by Johnson and the demonstrators. On Tuesday, he joined Council President Nury Martinez, 6th District, in introducing a motion on LAPD reform calling for a model of unarmed crisis response in which service providers and experts in intervention from different agencies are called to address non-violent, non-criminal incidents instead of armed police officers. A program using the approach in Oregon has shown success in de-escalating potentially dangerous situations, the council members said.

“I was born in an era when we demonstrated, when we marched and we protested, and it was just us. And I was proud of that, black people standing side by side, small and tall,” Wesson told the demonstrators in the Miracle Mile March. “But on this day, when I look out and I see whites, Latinos, I see gay, I see straight, that leads me to believe that this is our moment, that this is our time to change this country. And it would be criminal for us to miss that moment.” 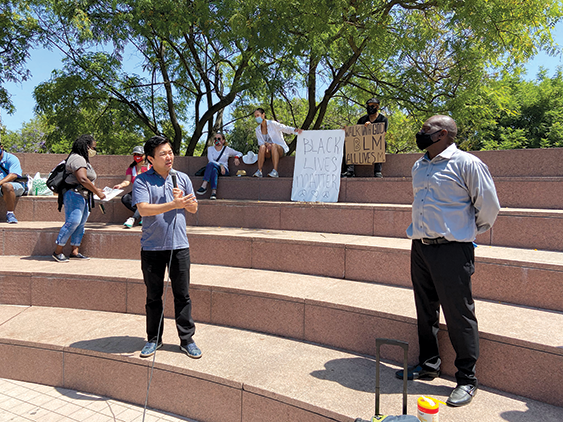 Ryu also said he supports the movement and thanked Johnson for his leadership.

“This first march that I walked in was your march, and I wanted to make it a point to learn from and follow a black leader. When I came to the march, it was an opportunity for many in the community to express their rage and their anger. But it’s the message of unity, the message of everybody coming together [that] showed me your leadership,” Ryu said. “As an immigrant, as an Asian American, I have experienced racism and discrimination throughout my life. Sometimes it was blatant, sometimes it was under their breath or just a look. But I know that pales in comparison to being black in America. This is America’s original sin, from the genocide of Native Americans and slavery, this institutional racism is ingrained it this culture. I walk for the African-American community and I believe black lives matter because I am here, and many of the rights and privileges I have, [are] because of the Civil Rights Movement and the work of activists.”

“It’s important to stand in solidarity and uplift black voices, to listen and to have open hearts to what this moment means for the black community in America,” Horvath said. “Because it’s not just a moment, it’s a movement.”

Some of the protesters also shared optimism and the reasons behind their involvement.

“I am praying that all of us can come together, all nationalities. That people understand that black lives matter. That’s something that we have been working on for so many years, for so long,” demonstrator Malika Blessing said. “All of us have had to fight. We have had to fight for everything, and we shouldn’t have to fight for our lives. Being able to be here in this protest and seeing all races come together all across the world, and seeing them come together for one cause, gives me hope that change is coming.”