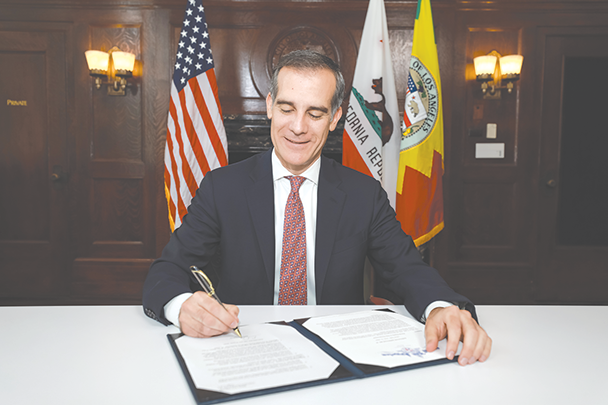 The executive directive asks each city department to immediately create contingency plans for affirmative action programs across all functions, including, but not limited to, recruitment, hiring, training and procurement policies. Additionally, Garcetti proposed a City Charter Amendment on a future ballot to implement affirmative action in city contracting. If passed by city voters, the ballot measure would amend the City Charter language that currently limits the ability to give preferences in awarding contracts.

“Our city is hungry for change, and we must knit racial justice and affirmative action into the fabric of our policies, our institutions and our society,” Garcetti said. “With the possible repeal of Proposition 209, we will begin preparing now for affirmative action in city government to open the doors of opportunity to African Americans and anyone too often left out and left behind in our economy. But no matter what happens at the ballot box, my executive directive ensures our city leadership looks at every issue through a lens of racial justice, acts to end structural racism and brings more Black Angelenos and people of color into the halls of government.”

Affirmative action in the city would be permitted if state voters repeal Proposition 209, a measure that outlawed the practice across California. On June 10, the California State Assembly passed Assembly Constitutional Amendment No. 5 to begin the process of repealing the measure. If ACA-5 is passed by the California Senate as well, it will be placed on the November general election ballot, giving Californians the opportunity to repeal Proposition 209 by a majority vote.

Enacted in 1996, Prop 209 effectively banned affirmative action in California by adding a provision to the state Constitution that the “state shall not discriminate against, or grant preferential treatment to, any individual or group on the basis of race, sex, color, ethnicity, or national origin in the operation of public employment, public education or public contracting.”

Joined by many Black city commissioners for the announcement, Garcetti is calling for each city department and office to appoint racial equity officers, develop a Racial Equity Action Plan to review pertinent departmental functions, and identify efforts to promote racial equity in our local government.

The directive creates a City of Los Angeles Racial Equity Task Force, including representatives from every department, to provide feedback on the efforts, identify additional goals and form working groups to help advance diversity in public service.

Through the mayor’s executive directive, the city will also undertake a study of racial disparities in hiring, promotion and contracting.

“I am honored to serve as the city’s first Chief Equity Officer, and I welcome the opportunity to continue to fight for racial equity and against injustice,” said Shockley, who will also continue to serve in her role as deputy mayor for economic opportunity. “I am proud to work for an administration that recognizes it must start at City Hall if Los Angeles is to become a model of racial fairness.”