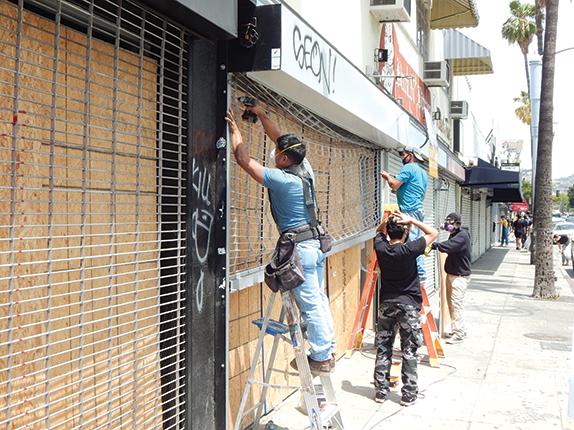 On June 11, the Greater Miracle Mile Chamber of Commerce virtually hosted a pair of government officials, U.S. Rep. Ted Lieu (D-Torrance) and Los Angeles City Attorney Mike Feuer, to hear their thoughts on the effects of the ongoing coronavirus pandemic and the Black Lives Matter protests after the death of George Floyd at the hands of Minneapolis police.

Lieu, who spoke first, said the number of black people killed by police – recent killings include Floyd, Breonna Taylor and, the day after the chamber event, Rayshard Brooks in Atlanta – shows that “this is not an issue of just a few bad apples.”

“This is a systemic issue. It is institutional racism. All life is precious. It also turns out that black lives are subjected to much higher risk of police brutality than white lives … It takes an entire village to allow this kind of systematic, persistent murders of black Americans, and that’s what we’re trying to fix,” Lieu said.

Lieu said the Justice in Policing Act of 2020, of which he is a cosponsor, seeks to increase transparency regarding police misconduct, hold police officers more accountable for their actions and ban some of the techniques that have led to fatalities, such as chokeholds.

On a local level, Lieu noted that while crimes such as looting, arson and assault “cannot be tolerated,” some of the actions taken by Los Angeles Police Department officers during the May 30 protests in the Fairfax District may have crossed the line into excessive use of force against peaceful protesters. Lieu added that according to the Los Angeles Times, the LAPD is investigating 56 misconduct allegations.

“We saw some videos in the Fairfax District … where it appeared LAPD used batons, shot projectiles at really close range to people, seemingly without provocation. I asked for an investigation of the police commission to look into those incidents … Hopefully the commission can get to the bottom of those incidents to see if there was excessive use of force,” Lieu said.

Lieu also addressed what is being done to help both businesses and people who have been impacted by the coronavirus pandemic.

Lieu said the national effort to create a vaccine for the virus, called Operation Warp Speed, has produced “a number of promising results from different companies,” and similar efforts are being undertaken in countries across the globe.

Lieu said he’s heard from many constituents about problems with the Paycheck Protection Program, and he fielded several questions from chamber members regarding their own struggles with the PPP. Beyond loans, Lieu said Congress is looking into how the federal government can help business owners receive the money they believed they would receive from their insurance companies, as there have been reports that some companies have refused to pay.

“Despite what you see in the media, there’s been unprecedented cooperation on a bipartisan basis to address this pandemic … Everyone is working together to try to help businesses, the American families, everyone who’s been affected by this pandemic. That’s going to continue, and at the end of the day, we’re all Americans,” Lieu said.

While Lieu discussed his work in Washington, D.C., Feuer informed the chamber members about what was happening at the local level.

Feuer said his office has cracked down on those who have used the coronavirus crisis as a chance to make an inordinate profit by price gouging, especially on necessary items like face masks, hand sanitizer and other personal protective equipment. As examples, Feuer said his office found one seller offering 10 masks for more than $200 and another who sold a couple liters of hand sanitizer for more than $200.

“In those instances and others, we’re going after price gouging,” he said.

In other cases, Feuer said people have been selling fake COVID-19 tests, or using misleading claims to advertise their products as something that prevents or cures disease.

Feuer added that his office is also enforcing the “Safer at Home” order that limits which types of businesses can reopen.

“I am extremely empathetic with the need of small businesses in particular to get on their feet. There are bills to pay and employees who rely on those businesses for their livelihood … but all of us need to adhere to the rules that public health officials identify as crucial for all of us to return to work as soon as possible,” Feuer said.

In regards to the protests, Feuer agreed that change was necessary, as Floyd’s “murder has touched every corner of the country.” The challenge, he said, would be to find a way to reform the LAPD while allowing its positive impact to continue. The LAPD still needs to attract high-quality recruits and the department’s morale will be a factor in determining its effectiveness, he said, but systemic racism and excessive use of force must be combatted.

“Striking that balance is going to be extremely challenging to do, but it’s necessary,” he said.

When asked about the push by some activists to “defund the police,” Feuer said that idea does not have his support, and he doesn’t use the term.

“I do support rethinking how we police and rethinking what we mean when we say these are the ingredients necessary for public safety,” Feuer said.

However, the LAPD’s budget may shrink due to the coronavirus crisis, just as the city attorney’s office budget has. Feuer said his office expects an 18.6% budget cut, and some of his staff are taking pay cuts.

“I think every department in the city needs to be examined in the same way,” he said.

Feuer, a Fairfax District resident, said he was encouraged by those who returned the day after the protests on May 30 to help clean up their community, and he hopes a “stronger, more resilient, more hopeful, more equitable” Los Angeles emerges from the current struggles.

“Community members with brooms and dustpans were going to stores whose owners they’d never met before to lend a hand and clean up shattered glass … Our neighbors were doing one thing; they were saying ‘we are one community,’” Feuer said.