Jewish community unites to clean up after protests 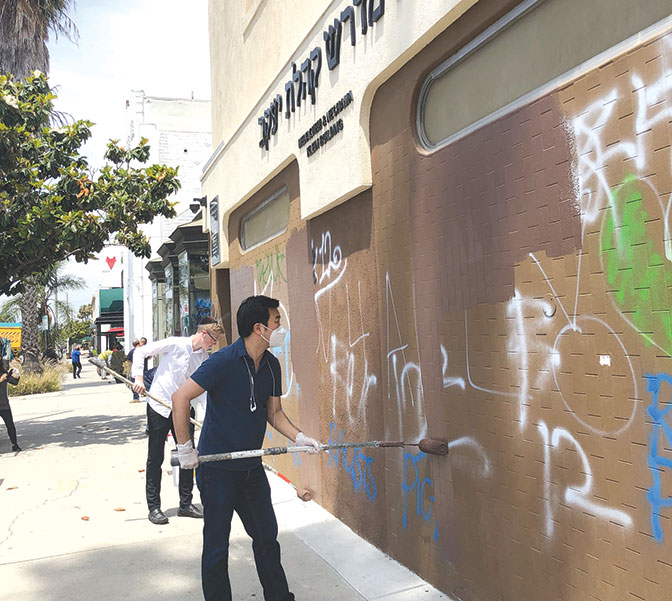 Councilman David Ryu painted over graffiti on a building in the 7100 block of Beverly Boulevard on May 31 in a show of support with the Jewish community. (photo courtesy of the 4th District Council Office)

While supportive of the message protesters are trying to convey, local Jewish leaders denounced the violence and vandalism that occurred in the Fairfax District and other places during demonstrations on May 30.

Graffiti was scrawled on temples and buildings at Jewish schools along Beverly Boulevard, as well as the statue of Raoul Wallenberg, a Swede who helped thousands of Jews escape the Holocaust during World War II, that is located in a plaza at Beverly Boulevard and Fairfax Avenue. Local leaders said there has also been an increase in anti-Semitic messaging online and an increase in attacks specifically targeting the Jewish community.

“First of all, I am deeply saddened and horrified by what happened to George Floyd,” said Los Angeles City Councilman Paul Koretz, 5th District. “I had neighbors who attended the protest at Pan Pacific Park and it was a very peaceful protest. But many times, with highly-charged situations, there are others who did not have peaceful intentions, and they took advantage of that situation. Some targeted the Jewish community. There were anti-Semitic slogans scrawled on Jewish buildings, shuls and educational sites.”

Koretz said he toured the neighborhood early on May 31 to view the damage first-hand. He helped coordinate cleanup efforts in the area. Councilman David Ryu, who represents the neighboring 4th District, joined the cleanup effort and painted over graffiti on May 31 at Congregation Kehilas Yaakov in the 7100 block of Beverly Boulevard.

“Some people are taking advantage of peaceful protests and using them as an opportunity to loot, commit arson and put graffiti on buildings. It’s not what the protests are about,” Sanderson said. “We have been communicating with all of the Jewish institutions in impacted areas to work with them. Let’s hope, with this, there is an end to the violence and a move toward calm.”