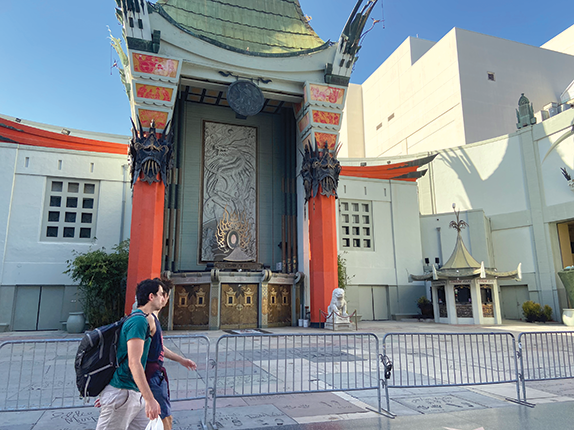 COVID-19 has put a halt to the tourism industry, a traditional economic driver for Hollywood. (photo by Edwin Folven)

On May 29, the Hollywood Chamber of Commerce continued its Leadership in Action Virtual Town Hall Series with a discussion of the coronavirus pandemic and its effect on Hollywood and the local economy. The featured guests were Assemblyman Richard Bloom (D-Santa Monica), Assemblywoman Laura Friedman (D-Burbank) and Assemblyman Miguel Santiago (D-Los Angeles), all of whom represent districts that include portions of Hollywood.

During the wide-ranging, one-and-a-half-hour talk, the Assembly members tackled a variety of topics, including the state budget, the need to focus on preparing for wildfires and other disasters, the liability concerns of business owners and when they believe the Los Angeles area can begin returning to normalcy.

In California, the deadline to pass a balanced budget is June 15. While the year began with hopes that the state would be working with a multi-billion-dollar surplus, the economic slowdown due to the COVID-19 crisis means the state is likely to face a budget deficit of $54 billion.

One confounding factor is that the tax deadline was pushed back until July, meaning state leaders don’t have exact figures with which to work, Santiago said. He added that the legislature is likely to pass a “baseline budget … that will keep the lights on,” then allocate additional funding by passing budget trailer bills later this summer.

“There’s a lot of best-guess work going on and estimates to ensure California lands on its best feet,” Santiago said.

“This process is moving very rapidly because we lost several weeks when we went home after the initial stay-at-home orders and recessed the Assembly for several weeks,” Bloom said.

Despite the struggles to pass this year’s budget, there are some items that, if neglected, could cost the state dearly, the Assembly members said.

Friedman pointed to a bill she and Bloom are working on, the Assembly companion to Senate Bill 45, which would authorize more than $5.5 billion in bonds to fund wildfire prevention, drought preparation, flood protection and “other issues that are going to be exacerbated by climate change,” Friedman said. If approved by the state government, the bond would be put to the voters on the November ballot.

“We were all full [steam] ahead … until COVID hit, and we’re still all discussing whether there’s room for a bond right now, given the financial situation,” Friedman said.

If there is inaction on this issue in the interest of saving money now, Friedman said, it might cost taxpayers more later, much like delayed preparation and deferred action on the coronavirus pandemic is negatively impacting Americans now, despite “years of warnings from scientists and medical doctors.”

Bloom agreed, saying he shared Friedman’s “passion on this topic,” though he noted that if the bond were to appear on the November ballot, the Assembly needs to continue moving with “some urgency,” as deadlines are approaching.

The Assembly members also discussed the ongoing progress being made to reopen portions of the local economy.

Los Angeles County is looking to move into Phase 3 of the recovery – which includes schools, museums, entertainment industry productions and spectator-free sporting events – as early as June 12.

The Assembly members said they’ve heard from many constituents, including many business owners, about their desire to return to work or reopen their shuttered businesses. Hollywood has been especially hard-hit because of its reliance on tourism, entertainment and restaurants to drive the local economy, the Assembly members added.

However, reopening too quickly could result in both health and financial impacts, Santiago said.

“I think there’s an urgency for us to open the economy, just simply because we know what the economic pain is, and the recovery is much slower if you don’t open up quickly. Having said that, I will caution our steps towards opening have to rely on the facts, and the facts are related to health care. I think this is one of the toughest decisions we’ve ever had to make in government,” Santiago said.

All three Assembly members said that without protections against litigation, business owners could face lawsuits if employees or customers were to become sick.

Bloom, an attorney, said there has been some talk of Gov. Gavin Newsom issuing an executive order to protect companies against lawsuits, though it might be beyond the governor’s control.

“Small businesses and large businesses are legitimately concerned that they might be held liable for even good-faith attempts to implement [safety measures] at a time when we’re really in uncharted territory … I think this is going to have to be legislation. If we’re going to do it on an emergency basis, it requires a two-thirds vote. That’s a very high threshold, and there will be some controversy around this,” Bloom said.

Friedman, who noted that she’s not an attorney, said she believes some guidelines and “some more clarity from the governor’s office would help,” though she doesn’t think that will stop lawsuits.

“At the end of the day, people are still going to have a right – unless there’s some extraordinary legislation that says you can’t have liability for this – people can still make a claim, as you can for any other illness,” Friedman said.

Santiago, who also clarified that he’s not an attorney, encouraged business owners to “follow the basic guidelines the state puts forth or the county puts forth” to avoid any complaints of neglect.

While encouraging caution, the legislators also empathized with business owners and customers, as both are “anxious” to return to normalcy, Friedman said. She added that businesses have found “creative” ways to keep everyone safe, such as restaurants selling groceries in addition to prepared food in an effort to keep more people employed.

While some government agencies and employees have tried to stymie those efforts, those officials eventually caved to public and political pressure, she said, and that’s for the best.

“I think it’s up to us as policymakers and leaders to ensure we enable that kind of creativity, whether it’s more outdoor dining, whatever we need to do to relax codes to allow businesses to think outside the box and operate outside the box,” Friedman said.

Bloom said once the time comes to reopen businesses, it must be done “slowly and methodically.”

“I think the most important thing that we have to bear in mind as we move through this is that we’re still in the relatively early stages of a health care emergency that requires us to be very, very cautious, lest the number of people who are infected begin to explode again,” Bloom said. “That said, I think the limited opening of the economy that we’re seeing now is a positive thing.”

The Assembly members also encouraged everyone to continue practicing safety measures to limit the spread of the virus. Santiago added that progress in reopening the economy depends on keeping the infection rate down, and for especially hard-hit groups like live performance venues, sustained success will be the key in determining how long they must remain closed, meaning the “larger challenge with the later phases is human behavior.”

Friedman, who said she lost two older relatives to COVID-19, said while “we all want everything to open,” that will only happen when “it’s safe to open.”

“I think we should all take that upon ourselves, business owners and employers as well … This is a devastating disease with no cure and not a lot of great treatment options at this point. We always have to remember that as we make, not just policy decisions for us on our side, but all of you as business owners have to remember that this is still a disease that is not under control, and certainly not here in Los Angeles,” Friedman said.

Full closure of Wilshire to last through June 15