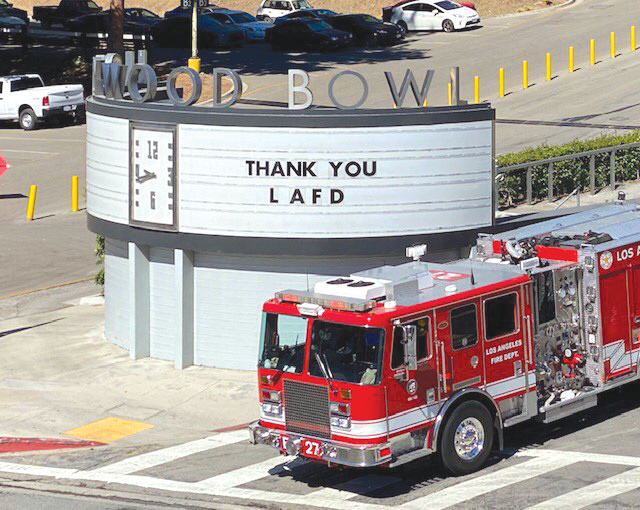 The marquee at the Hollywood Bowl featured a special message after the fire was extinguished. (photo courtesy of the LAFD)

Warm temperatures and gusty winds sent firefighters into action earlier this week as unrelated brush fires erupted near the Hollywood Bowl on June 9 and on a hillside near Franklin Canyon Park on June 7.

The fire near the Hollywood Bowl was reported at 6:19 a.m. on a hillside near a parking lot for the venue in the 2300 block of Highland Avenue. Using a combination of ground crews and three helicopters, Los Angeles Fire Department personnel extinguished the blaze at approximately 8:30 a.m.

No buildings were damaged and no injuries were reported. The fire blackened approximately 2.5 acres of vegetation and the cause remains under investigation, said LAFD spokesman Brian Humphrey. Crews were stationed near the burn area overnight to prevent small flare-ups from reigniting remaining brush on the hillside. The Hollywood Bowl marquee featured a message of thanks for firefighters.

The fire near Franklin Canyon Park occurred shortly before 9 a.m. on June 7 near 1300 Lake Drive, in the Beverly Crest area, north of Beverly Hills. By approximately 10 a.m., firefighters surrounded the blaze and it was extinguished a short time later. The area is in the city of Los Angeles and the Los Angeles Fire Department oversaw operations, with assistance from the Beverly Hills and Los Angeles County fire departments. No structures were damaged and no injuries were reported. The fire was contained to approximately three acres and the cause remains under investigation.

Humphrey said the warm and windy conditions this week signaled an unusually early start to fire season. He said brush fires have occurred throughout the city over the past four days in other areas including Bel Air, Elysian Park and the San Fernando Valley. All have been unrelated and do not appear to be the result of foul play. They illustrate the danger that exists and a need for precautions, Humphrey said.

“Many fires are preventable if people remember to do things like not parking on tall grass and removing brush and debris away from homes,” Humphrey said. “We want people to use common sense and be careful.”