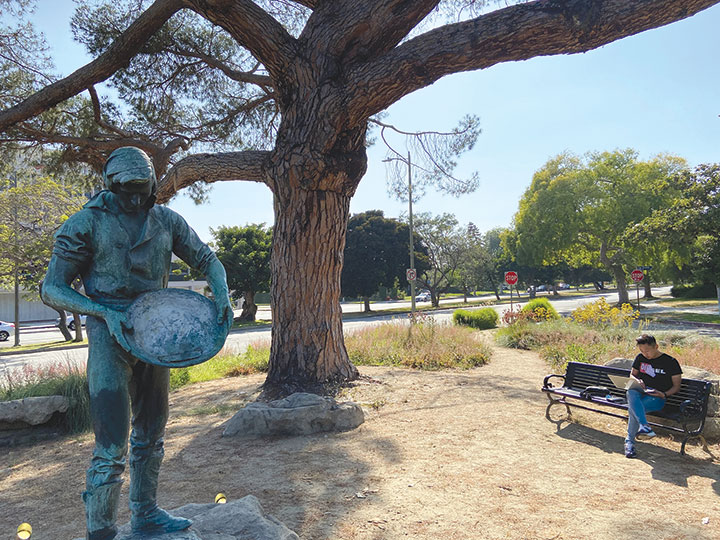 The fatal collision occurred on San Vicente Boulevard just west of McCarthy Vista, where a small open space is located with a statue commemorating the California Gold Rush. (photo by Edwin Folven)

A 43-year-old driver was killed on June 19 when he lost control of his vehicle and struck a tree on San Vicente Boulevard, just west of McCarthy Vista in the Carthay Circle District.

The collision occurred at approximately 5:50 a.m. as the victim, Jason Lee Ross, of Los Angeles, was traveling westbound on San Vicente Boulevard at a high speed, police said. Ross’ Chevrolet Camaro struck a curb and tree on the north side of the street. He was ejected during the collision and died at the scene.

The collision occurred just west of a small open space at San Vicente Boulevard and McCarthy Vista with a statue commemorating the California Gold Rush.

It was unclear if Ross was wearing a seatbelt, which is one of the details to be determined during the investigation. Investigators will also attempt to determine if alcohol or drugs were involved and what other factors may have led to the fatal collision.

Authorities initially thought Ross may have been street racing but have since ruled it to be a solo vehicle collision, said Officer Joel Twycross, with the Los Angeles Police Department’s West Traffic Division. No further details were available.