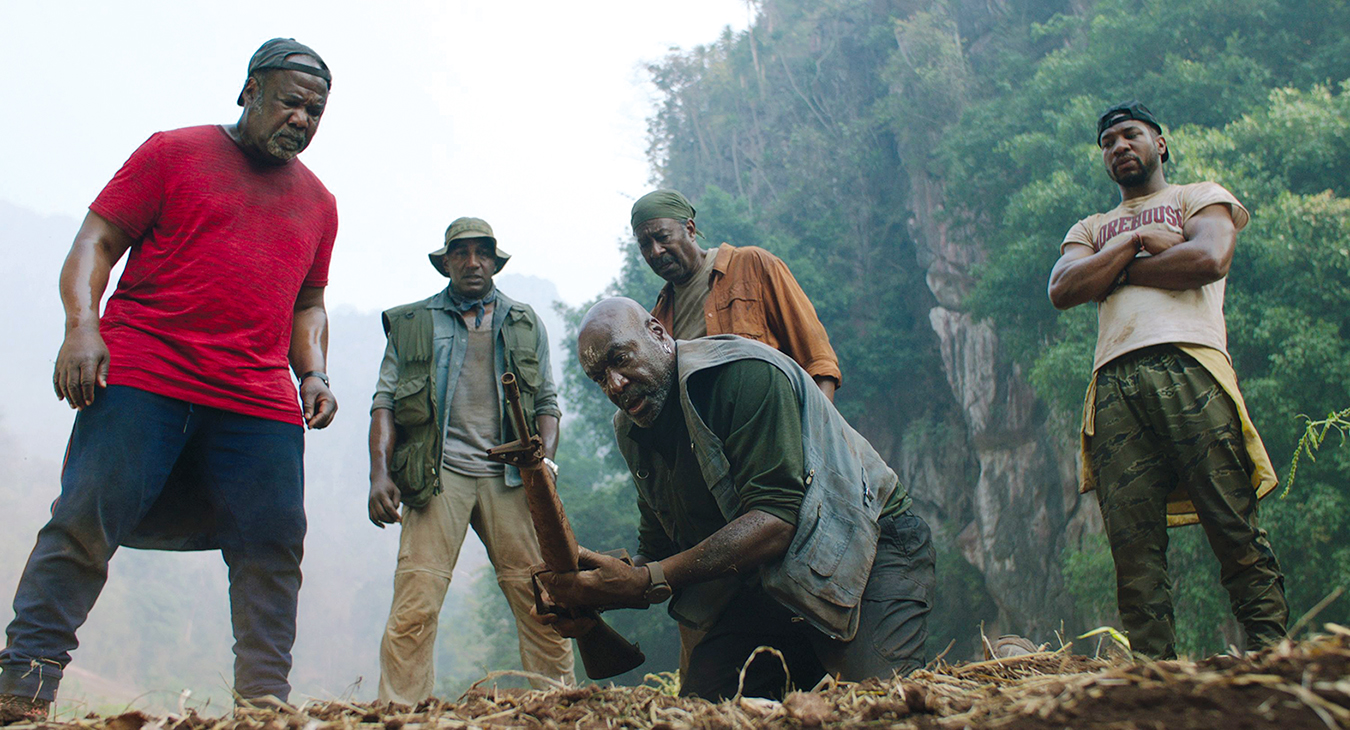 A group of Vietnam War veterans search for gold and the remains of their fallen squad leader in Spike Lee’s new film, “Da 5 Bloods.” (photo courtesy of Netflix)

Don’t expect Netflix’s “Da 5 Bloods” to comply with procedural war epics complete with chilling choreographed action sequences. That’s not Spike Lee’s brand. Instead, he takes the Vietnam War film, already a political breed, and bathes it in correlations between a disturbing past and continually vile present.

Frankly, Lee doesn’t do action well, and it shows in the various flashbacks that include gun fights and explosions out of necessity. Instead, his latest film succeeds during the banter amongst old friends Otis (Clarke Peters), Paul (Delroy Lindo), Melvin (Isiah Whitlock Jr.) and Eddie (Norm Lewis). Those flashbacks don’t recast the characters or de-age them, to a unique effect usually reserved for the stage, not screen.

The real story doesn’t occur in the past, but present day, plagued by war trauma and the myth of the American dream. These four vets from the 1st Infantry Division – “Bloods,” they call themselves – return to Vietnam first to cheers their past camaraderie and then revisit once-hostile territory.

Technically, the Bloods embark on a mission sanctioned by the U.S. government: retrieve the body of fallen squad leader Norman (Chadwick Boseman). Unofficially, they also plan to recover buried gold they thought was lost. Uncle Sam used them and then forgot them, so this caper serves as a payment for a lifetime of racism and systemic abuse.

The hiccups occur rather quickly, when Paul’s son David (Jonathan Majors from “The Last Black Man in San Francisco”) arrives unexpectedly and demands a piece of the prize for his silence. Then, determining a price for converting the gold to cash becomes the next challenge thanks to expensive French buyer Desroche (Jean Reno). And that all transpires before the crew even sets off, which brings a host of new problems, external and internal, that make this story so much more than a simple snatch-and-grab.

For all the outlandish events Lee packs into two and a half hours, this isn’t new narrative or genre-bending territory for cinema. As the Bloods journey through the wild, we experience a history lesson along the way. Alfonso Cuaron’s road movie “Y tu mamá también” does something similar, allowing the camera to veer away from protagonists and linger on impoverished surroundings while a narrator provides deep context. Lee has similar goals, presenting a revised account of America’s past.

The film starts this way, juxtaposing recognizable historic moments with ones often omitted from textbooks. The impulse to emphasize American exceptionalism only moves one direction, uninterested in movers and shakers like Tommie Smith or Angela Davis. When the Bloods discuss notable black figures, the scene cuts away to actual stills of them like a documentary. Granted, this is a Lee tactic that dates back to the ’80s, so Ken Burns and his ilk don’t deserve all the credit. 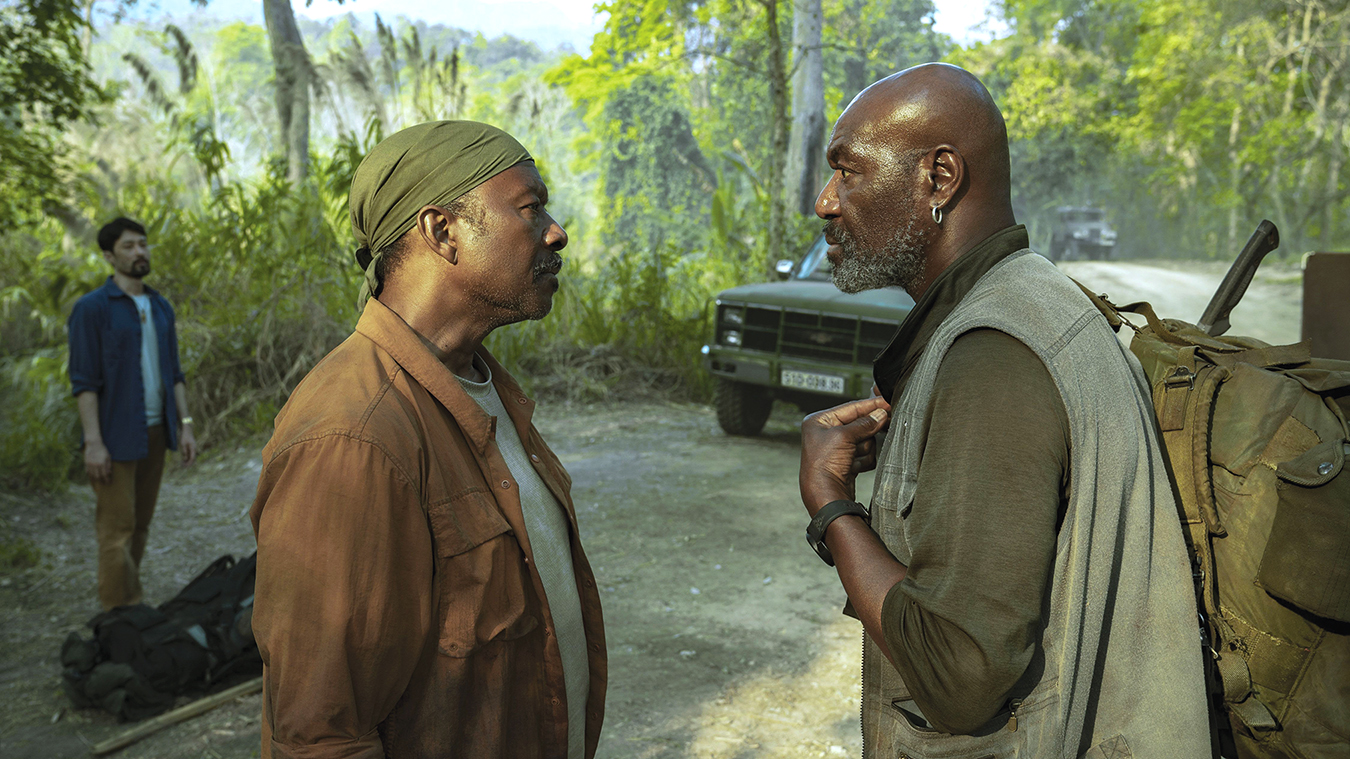 Remember 2006’s “The Fountain,” a Darren Aronofsky flick with Hugh Jackman and Rachel Weisz about the Spanish Inquisition, mid-2000s cancer research and a bald monk Jackson floating in space? It’s a wacky failure, but attempts to do something remarkable. “Da 5 Bloods” is Lee’s “Fountain.” Sloppy at times, with logical errors in the plot and corny resolutions that condense life’s complexities a bit too far.

But “Da 5 Bloods” is the kind of film that sets up an impossible expectation come the end. Since Lee dislikes ambiguity (you can tell how much he loves each character), the only available option is a melodramatic outro that overstates its major points. That’s less a condemnation than how Lee tries to have his cake and eat it too.

Regardless of flaws – and there aren’t enough to remotely condemn this one – a few performances shine. Lindo’s Paul is a complex character, a Trump-supporting vet with PTSD, haunted by the war, beat down by prejudice. He even breaks into a mesmerizing monologue amidst one of the most claustrophobic close ups in modern cinema.

And while Major’s David tags along for the ride with the other Bloods, he proves much more complex – a son desperately trying to understand the father who remains so distant. One final unexpected star arrives too in Van Veronica Ngo as a North Vietnamese radio host taunting American soldiers. Like her standout role in the opening scene of “Star Wars: The Last Jedi,” this one is also too short. Hopefully someone will finally get the memo and give her a leading role.

“Da 5 Bloods” is enthralling, infuriating, at times mesmerizing. Amidst its victories and rather notable flaws, it’s never dull. This is 2020’s “Parasite,” a story that feels familiar, playful even, until it doesn’t. And when that shift occurs, anything is possible.

Angelenos march for All Black Lives