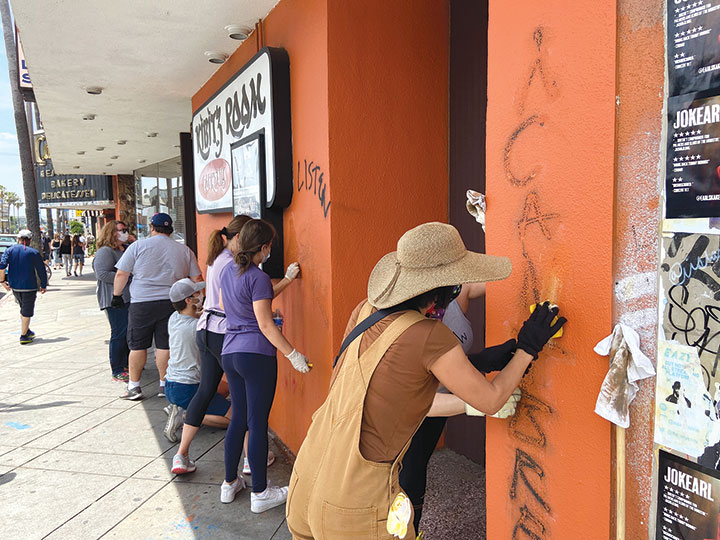 Community members cleaned graffiti on the facade of Canter’s Deli and many other businesses on Fairfax Avenue on May 31. the day after demonstrations and looting occurred in the area. (photo by Edwin Folven)

A day after protests escalated into clashes with police and looting in Los Angeles and Beverly Hills, many people returned to the Fairfax District on Sunday, May 31 to help remove graffiti, clean up trash and show support for businesses and the community.

They returned as protests continued in other parts of Southern California and throughout the nation in response to the death on May 25 of George Floyd, who died while being detained by police in Minnesota. The cities of Los Angeles, Beverly Hills and West Hollywood implemented curfews following the civil unrest on Saturday night and Los Angeles Mayor Eric Garcetti called in the California National Guard. The curfews in Los Angeles, Beverly Hills and West Hollywood remained in effect from May 31 to June 1. Shortly after 5 p.m. on May 31, Los Angeles County issued a curfew from 6 p.m. on May 31 to 8 a.m. on June 1. The countywide curfew was extended again twice, and runs from from 6 p.m. on June 2 through 6 a.m. on June 3.

The civil unrest occurred on May 30 after thousands of people gathered at a demonstration in Pan Pacific Park organized by Black Lives Matter-Los Angeles in response to Floyd’s death. The protest at the park was described by many as peaceful. The demonstrators later marched west along Third Street toward Fairfax Avenue, where violence erupted. 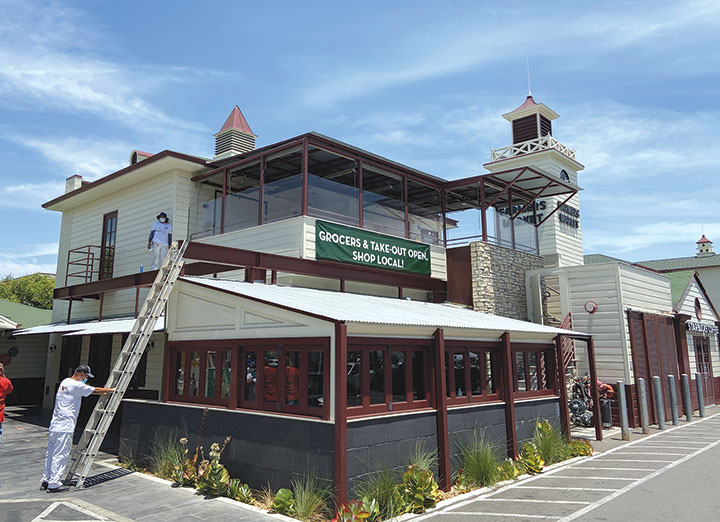 Crews painted over graffiti and fixed damage at the Original Farmers Market, corner of Third and Fairfax. (photo by Edwin Folven)

Once the group reached the corner of Third Street and Fairfax Avenue, some protesters clashed with police who had assembled a large force in the area. Demonstrators climbed onto the rooftops of Du-par’s restaurant and other buildings along the Third Street side of the Original Farmers Market, which fully closed to the public at approximately 2:30 p.m. Protesters spray-painted graffiti on buildings at all four corners of the intersection of Third Street and Fairfax Avenue, including Mendocino Farms, Trader Joe’s, Whole Foods Market and the Writers Guild of America West. Later in the evening, the Nordstrom’s department store at The Grove was looted and a small building used as a Los Angeles Police Department substation was set on fire in an outdoor area of The Grove.

Protesters also clashed with police at the intersection of Fairfax Avenue and Beverly Boulevard, where LAPD patrol cars were set on fire. As more officers arrived, many people fled north through the Fairfax business district, some breaking windows and spray-painting graffiti. Other demonstrators reached the Rodeo Drive shopping district in Beverly Hills at approximately the same time. Graffiti and broken windows could be still be seen throughout both areas on May 31, and the entrances to many businesses remained boarded.

On Sunday, the demonstrators in the Fairfax District were replaced by community members wanting to help, with many wiping graffiti away by hand.

“It’s our city and we love our home,” said James Ngoy, a Franklin Village resident who helped clean graffiti from the façade of Canter’s Deli on Fairfax Avenue. “Small businesses didn’t deserve this.”

Jacqueline and Marc Canter, siblings who own and operate Canter’s Deli, recounted a harrowing night on Saturday as the demonstrators passed by their restaurant. Jaqueline Canter handed out bottles of water, pastries and salami and cheese to many demonstrators, who seemed grateful and moved along peacefully, she said. As the sun set, some people set fire to trash dumpsters in the street in front of the deli. Later, a women who had been blinded by pepper spray was brought in by a bystander, and Jacqueline and Canter’s employees helped rinse her eyes with emergency supplies from the deli.

“The only reason we didn’t get looted is we were open,” Jacqueline Canter said.

“It should never have gotten out of hand,” Marc Canter added.

Looters smashed windows and ransacked other stores on Fairfax Avenue, including the Goo salon near the corner of Fairfax and Rosewood avenues. Owner Molly Scargall said she had just received news on Saturday that her salon could reopen due to easing of COVID-19 orders, and later that day the looting happened.

“I was ready for a new beginning on Fairfax Avenue. We were finally going to be back open,” said Scargall, who has owned the salon for 20 years. “Then this happened. I was home and saw the whole thing on TV. It was terrible.” 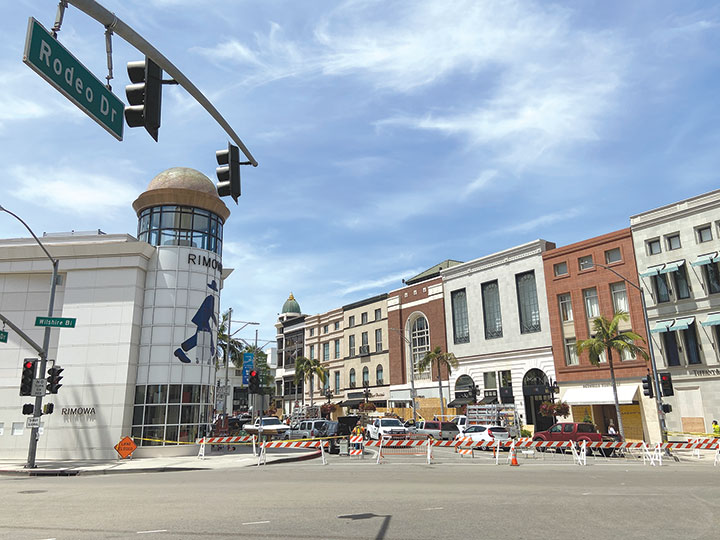 Barricades remained in place on Rodeo Drive in Beverly Hills, which remained closed on Sunday. (photo by Edwin Folven)

Scargall said looters stole computers, beauty supplies and many other items. She remains undaunted, however, and plans to reopen as soon as possible.

“Hopefully, my insurance comes through and we rebuild. I am so thankful to the community,” she added. “There were people here sweeping up glass when I got here. People are really showing they care. Some people came all the way from Van Nuys to help.”

At the Original Farmers Market, crews painted over graffiti on Sunday afternoon and the owners planned to reopen as soon as Monday. Ilsyha Buss, director of marketing for the Farmers Market, said she was thankful nobody was hurt and the situation wasn’t worse.

“It was mostly graffiti and a few windows that were broken,” Buss said. “Safety is the main thing for us. We are so grateful to the LAPD, the LASD and the National Guard for keeping the market safe.”

Frances Tario, owner of Du-par’s at the Farmers Market, also said she is grateful none of her staff or customers were hurt. Dining resumed in the restaurant on Sunday afternoon.

Tario said the restaurant’s office was burglarized and a safe and computers were stolen, and looters turned the water on and flooded the premises. She remained steadfast in her commitment to remain open, however, and credited the hard work of her staff for cleaning up and ensuring the restaurant was operational.

“Our staff has been so supportive. They have been here working so hard, and many other people have come to help,” Tario said. “So many people are calling to see if we are open. We are very grateful to have survived, and Du-par’s will remain open.”