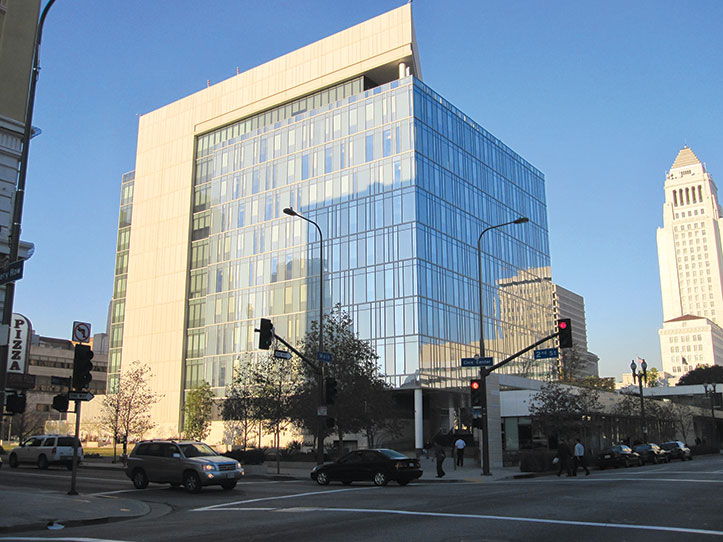 Many proposals for police reform have been made including major changes within the Los Angeles Police Department, which is headquartered downtown across the street from Los Angeles City Hall. (photo by Umberto Brayj)

Calls for law enforcement reform are growing louder in the wake of the death of George Floyd, a black man who died at the hands of police in Minneapolis, and in response to the plight of countless others who have suffered injustice as the result of enduring and systemic bias and racism in society.

The calls for reform have been made at many different levels, from the tens of thousands of protesters marching in the streets to leaders in national, state and local government. Ideas about how to address the issues have also taken many forms.

National leaders from the local area including California Democratic U.S. Reps. Ted Lieu, Karen Bass and Adam Schiff have called for changes. Bass, chair of the Congressional Black Caucus, is among a group of legislators that on June 8 introduced the Justice in Policing Act of 2020, a comprehensive approach to police accountability.

At the state level, Gov. Gavin Newsom has called for the creation of new standards for crowd control and police use of force in protests, and an end to the chokeholds and other similar techniques used by law enforcement that can cause a suspect’s death.

Los Angeles Mayor Eric Garcetti has proposed cutting $100 million to $150 million from the Los Angeles Police Department’s budget and redirecting it to programs to enrich people’s lives in disadvantaged communities.

Local leaders, including Councilmen David Ryu, 4th District, Curren Price, 9th District, and Mike Bonin, 11th District, are seeking an investigation into police conduct at demonstrations. Bonin sent a letter on June 6 to Los Angeles Police Department Chief Michel Moore seeking explanations of police tactics used during protests citywide. Ryu and Price introduced a motion on June 10 seeking a specific investigation into police actions at a May 30 protest in the Fairfax District, which originated as a peaceful demonstration in Pan Pacific Park but became violent after clashes occurred between police and demonstrators. Some people at the demonstration claim police used unnecessary force, and videos have surfaced showing police officers striking demonstrators with batons.

“What I saw [at the Fairfax District demonstration] was a peaceful protest that fell to chaos,” Ryu said. “Los Angeles deserves a full account of what happened that night. I have seen videos of protesters beaten by police officers while looting and vandalism went unchecked. I don’t think this reflects the best of our police department, and I want answers, accountability and change with how LAPD responds to peaceful protests.”

Lieu, who represents the Fairfax District, also sent a letter to the Los Angeles Board of Police Commissioners calling for a full investigation of tactics on May 30, as well as a review of police use of force.

“During these difficult times, as our nation and our city tackle generations of targeted violence by civilians and police against black Americans, the gathering of people to express their views and concerns should not be met with more violence,” Lieu said in a letter to Los Angeles Police Commission President Eileen M. Decker. “Americans of all colors and creeds are seeing that racism and white supremacy are problems we cannot ignore. And yet, as our neighbors and communities gather together to express these concerns, they are met with further violence. It is vital to our democracy that Americans be able to live without fear of not only expressing their views, but also when interacting with police.”

The Los Angeles Police Department responded to the calls for investigations into use of force at demonstrations.

“The Los Angeles Police Department continues to investigate allegations of misconduct, violations of department policy and excessive force during the recent civil unrest,” read an LAPD statement. “The department has assigned 40 investigators to this effort and will look into every complaint thoroughly and hold every officer accountable for their actions. So far, there are a total of 56 complaint investigations, with 28 involving alleged uses of force. Seven employees have been assigned to non-field duties.”

The LAPD is also seeking information from anyone who believes they were wrongfully accused of a crime, unjustly injured or experienced officer misconduct, and urges them to file a complaint with the department’s Internal Affairs Group by calling (800)339-6868.

Bass said the unprecedented calls for justice and change among demonstrators nationwide illustrates the need for reforms.

“What we are witnessing is the birth of a new movement in our country with thousands coming together in every state marching to demand a change that ends police brutality, holds police officers accountable and calls for transparency,” Bass said. “For over 100 years, black communities in America have sadly been marching against police abuse and calling for the police to protect and serve them as they do others. We unveil the Justice in Policing Act, which will establish a bold transformative vision of policing in America. Never again should the world be subjected to witnessing what we saw on the streets in Minnesota with George Floyd.”

Schiff also said he stands with people of color and is seeking systemic change.

“Police brutality and racism against black Americans is everywhere: from small towns to big cities, in the dark of night to the light of day. Whether driving a car, jogging down the street, bird-watching in a park, taking the subway, shopping at a store, attending church, sitting at home, sleeping in bed, black people – predominantly black men – have been harmed by racism and, in too many cases, killed doing these very simple things that the rest of us take for granted,” Schiff said in a statement. “That’s the thing about the virus of racism: we can never fully understand what it’s like to walk in another’s shoes. As a father, I’ve never had to talk to my kids about how to avoid being profiled, arrested, or, God forbid, killed by police. The fact that black mothers and fathers and grandparents have to have that conversation with their children and grandchildren every single day in this country is appalling. This has got to change.”

Garcetti outlined many other steps to improve law enforcement, including more training and enforcement of a requirement that officers intervene if they see inappropriate use of force and always report misconduct. All LAPD officers will undergo de-escalation and crowd control training so they can better respond to demonstrations. A moratorium is being placed on putting people on the state gang database, and more programs will be implemented to build relationships between officers and community members. The mayor has also created a Civil and Human Rights Commission, Civil and Human Rights Department and Office of Racial Equity to address inequality and support reform.

“Every step we take forward to protect people’s rights, to enact smart and overdue reforms, to undo structural racism, all of it is meant to build a more fair, equal and just Los Angeles,” Garcetti said.

LAPD leaders have also embraced a pathway to creating a more just and equitable city.

“The reforms announced are consistent with my commitment to a department that builds trust by recognizing the legacy of historical wrongs and acts to tear down any vestiges of racial injustice,” LAPD Chief Michel Moore said.

The Los Angeles Board of Police Commissioners has created a list of reforms that it will pursue to ensure change occurs. The reforms include a requirement that investigations of all complaints of police misconduct be monitored by the commission and the Office of the Inspector General, which will serve as watchdogs for improprieties. The police commission will also support reforms outlined by the mayor, and will advance provisions of a state law, Senate Bill 230, from implementation by July. That law, which is scheduled to take effect on Jan. 1, 2021, requires each law enforcement agency in the state to maintain a policy that provides guidelines on the use of force and utilizing de-escalation techniques and other alternatives to force.

“The demonstrations of the last several days have been transformative for the people of Los Angeles, California and nation,” read a statement by the Los Angeles Board of Police Commissioners. “The demands for law enforcement reform are being heard. Angelenos have been crying for a path forward that doesn’t repeat the mistakes of the past, and the Los Angeles Board of Police Commissioners is listening.”