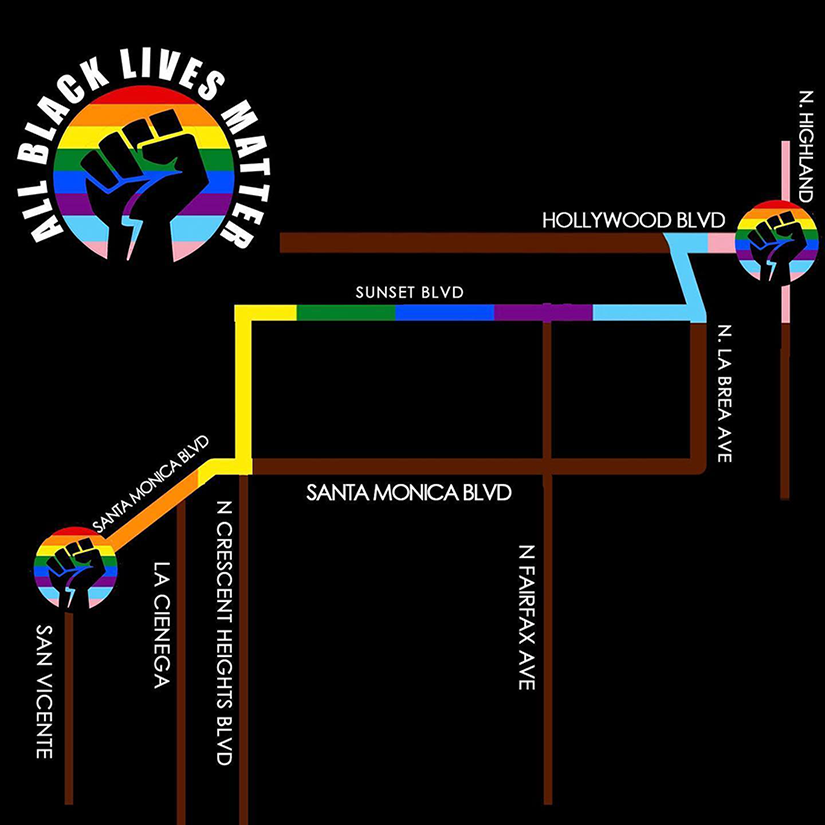 ABLM’s June 14 protest will begin at 11 a.m. at Hollywood and Highland and head toward West Hollywood. (map courtesy of ABLM)

After receiving backlash from community leaders for not coordinating with the Black Lives Matter movement, Christopher Street West, the nonprofit that organizes the annual Los Angeles Pride Parade and Festival, has announced it will no longer be an organizer of a solidarity march for the black community.

Instead, the Black LGBTQIA Advisory Board Council, made up of all black LGBTQ+ leaders, was formed to move forward in organizing the All Black Lives Matter solidarity march on Sunday, June 14. CSW/LA Pride is in full support of the ABLM march.

“We would like to apologize for missteps in our rush to create the June 14 solidarity march to rally against the systemic racial injustice the black community faces every day,” read a statement from CSW/LA Pride on their Instagram page on June 6. “We realized that we did not first collaborate with enough key leaders and activists in the black community that have been fighting on the front lines. For that, we offer our sincerest apologies.”

“In that haste, we overlooked the direct police involvement that permitting involves,” CSW said. “We understand that clearly goes against the demands for systemic police reform. This police reform is central to the mission of ending police brutality for which so many of you are out in the streets fighting today and every day.”

The ABLM march is in direct response to racial injustice, systemic racism and all forms of oppression.

“Marsha P. Johnson and Sylvia Rivera bravely started a movement at the Stonewall Inn in 1969. They stood up to systemic racism and bigotry,” B.L.A.C. wrote in a statement announcing the march. “We must acknowledge and recognize the many tireless years of service and action by black LGBTQ+ people. The LGBTQ+ community must extend its support to unite against oppression, police brutality, racism, transphobia and the many other disparities disproportionately impacting the black community.”

B.L.A.C. will lead the march on Sunday, and its leaders consist of Gerald Garth of Garth Management Group; Brandon Anthony, who works for Brandon Anthony’s Socialite House L.A.; Pastor Sammie Haynes of Vision Church Los Angeles; Paul Scott, who works for the LA Black LGBTQ Movement; Princess Murray of Compton Pride; Stacy Alford, who has a masters in public health; and Yuriel “Miss. Shalae” Young, who works for the Glasswing Group Blossom Brown.

“It is important for black voices and leaders to organize this protest, and any other efforts, because our voices need to be heard and it starts from our own community,” Anthony said.

He noted the advisory board added “All” to Black Lives Matter because they wanted to recognize the challenges black LGBTQ+ people face, and the voices of black trans women and men need to be heard.

Garth, who is also the CSW board treasurer and has been with the organization since 2016, said it’s critical for the organization to recognize the history of the black community, assess what happened and commit to do better.

“Yes, before its inception, we were running out and reaching out to black leaders. We were moving quicker than ideal,” Garth said. “In the beginning, it looked like people were not being invited to the conversation, so it was important to step back and really create spaces amplifying black voices.”

Garth said CSW/LA Pride is committed to long-term change and creating more opportunities to add people of color to its board, as well as engaging with local leadership. Moving forward, CSW will continue to work with B.L.A.C. to examine internal policy and further diversify its board to include more voices and perspectives from the black LGBTQ+ community.

Garth and Anthony shared the sentiment that on June 14, CSW board members, the LGBTQ+ community, the black community and Angelenos will surely come out to support B.L.A.C. and the ABLM march.

“This is a solidarity march for the entire black community as well as the LGBTQIA community,” Anthony said. “This is the time we will come together and march to the city of West Hollywood to let our voices be heard and ensure our lives matter, and have purpose in both the black and LGBTQIA communities.”

'The Vast of Night’ is the perfect summer film