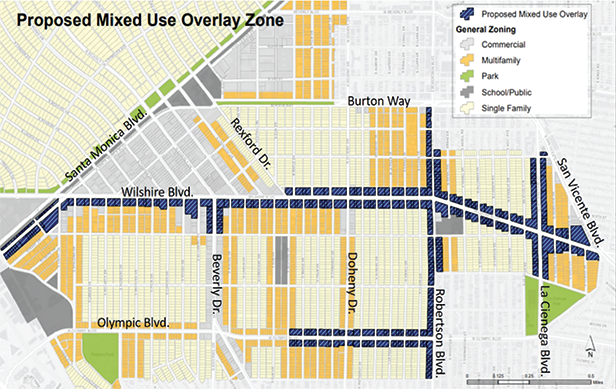 Many of the major streets in Beverly Hills would be zoned to allow for mixed-use developments if the Planning Commission and City Council approve an overlay zone. (map courtesy of the city of Beverly Hills)

On May 28, the Beverly Hills Planning Commission considered the details of a zoning change that could affect the makeup of the city: an ordinance creating an overlay zone for mixed-use developments.

Except for Commissioner Lori Greene Gordon, who recused herself because she holds an ownership interest in a property that could be affected by the ordinance, the commissioners advocated for mixed-use developments to be allowed on more than 25% of the commercial properties in Beverly Hills.

“I think, personally, that for mixed use, the time has come in Beverly Hills. It will provide us with more residential units, affordable units, walkable streets, live-work opportunities, and I think it’s something that’s really past due in Beverly Hills,” Chair Alan Robert Block said.

“This is a proactive effort to deal with something that we think is badly needed in the city, for many reasons,” Vice Chair Peter Ostroff added.

Some points of contention, however, were the proposed requirement of an average unit size of 1,750 square feet and a reduced parking requirement for developers.

“This gives the developer flexibility to decide what size units they’d like, if they’d like to provide a few large units and some small units, but it also ensures that a development isn’t entirely made up of 4,000-square-foot luxury units,” Tway said.

Reducing the required number of parking spaces per unit will also help developers keep costs down so more affordable units can be built, Tway added.

Commissioner Andy Licht pushed back against the unit size requirement, as he said limiting the number of high-end units would drive longtime residents out of the city when they seek to downsize from a single-family home to a condominium or apartment.

“I’m in total agreement to have affordable housing and have smaller units for all different levels of income, but don’t eliminate the higher-end people that we want to keep in the city and keep in our tax base, residents who have been here for 30, 40, 50 years,” Licht said.

Licht also pointed out that if the parking requirements were kept at their standard level, developers could still go to the city and seek a variance, as they do currently for mixed-use developments.

Ostroff said the state will likely require Beverly Hills to build 3,000 new housing units in the next 10 years, and the city needs more proposed projects if that goal is to be met.

“We also have to encourage people to try things, and if they look at things and they think, ‘No, this isn’t going to work,’ – and we have much too much of that as it is, and much too little in the way of proposals … we’re going to get nowhere, and that’s not where I want to be. I want us to generate interest in trying to develop in our city without changing the character of the city,” Ostroff said.

However, Commissioner Farshid Joe Shooshani said the mixed-use ordinance does not go far enough if the city aims to meet that goal.

“We’d better [approve the mixed-use ordinance] and do this fast and go to the city as an emergency … and redo our entire city plan, all of it, and change it fast. I think we should pass this immediately, and then go change the entire thing fast. It’s an emergency,” Shooshani said.

Block and Ostroff argued that a first step is important, and the commission is working on ideas that Block said “would be a good start.”

“It may be only a minutial portion of the numbers that we’re going to need, but we have to start somewhere,” Block said.