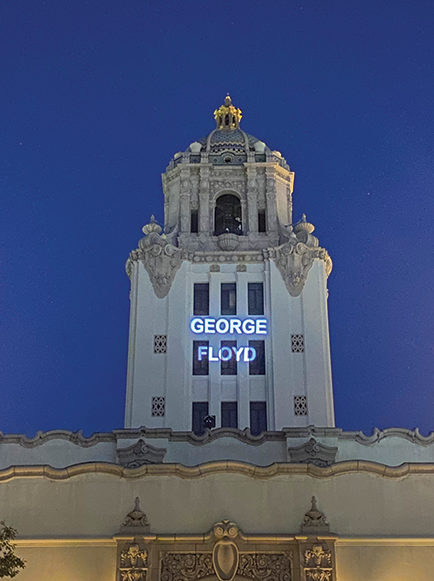 The city of Beverly Hills honored the memory of George Floyd, who died during an encounter with police in Minneapolis on May 25, by illuminating Floyd’s name on City Hall on June 8-9.

“The incident in Minneapolis that took the life of George Floyd was absolutely horrible to witness,” Mayor Lester Friedman said. “Let us honor George Floyd’s memory by being together in solidarity with the African-American community and moving this country forward where hatred has no place.”

During this past week, protests in the city and across the country have called for an end to racism and police brutality.

On June 6, On Saturday, there were two peaceful protests in Beverly Hills “with no major incidents,” Beverly Hills spokesman Keith Sterling said in an email.

The first, which included between 500 and 1,000 protesters, began in Century City around noon and traveled along North Santa Monica Drive toward Civic Center Drive before leaving the city at around 2:40 p.m. and returning to Century City, Sterling said.

The second protest entered Beverly Hills from West Hollywood at 3:20 p.m. This protest began at Pan Pacific Park with a crowd of almost 3,000 people and proceeded to the Beverly Hills sign at the Lily Pond at Beverly Gardens Park before leaving the city at 4 p.m., Sterling said.