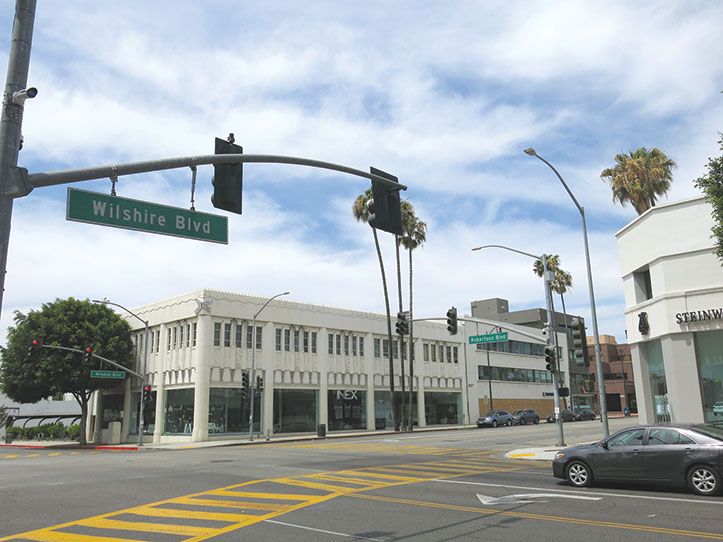 All four corners of the intersection of Wilshire and Robertson boulevards could be home to mixed-use projects in the future. (photo by Cameron Kiszla)

On June 19, the Beverly Hills Planning Commission approved a plan to create an overlay zone for mixed-use development in the city, sending a draft ordinance for the City Council to consider later this summer or early this fall.

The commission voted 5-0 to approve the ordinance for most of the included areas, though Commissioner Lori Greene Gordon recused herself for the discussion regarding Robertson Boulevard and portions of Olympic Boulevard, as she has an ownership interest in property that may be affected by the overlay zone. In a separate vote, the overlay zone for portions of Olympic Boulevard and Robertson Boulevard were approved 4-0.

Assistant Director of Community Development Ryan Gohlich said the council is likely to consider the ordinance in August or September. Currently, mixed-use development is not allowed in the city without City Council approval, but if the overlay zone is approved by the council, mixed-use projects will only require Planning Commission approval.

Approximately 100 public comments were submitted, with a wide range of opinions on allowing mixed-use developments in Beverly Hills. Many speakers wanted to approve the ordinance, but they desired some changes, such as including the Business Triangle in the ordinance, requiring developers to provide more parking spaces and adjusting height limits.

Despite the requests from members of the public, the commission declined to include the Business Triangle – including the north side of Wilshire Boulevard between Rexford Drive and South Santa Monica Boulevard – in the overlay zone, as adding residents might conflict with potential nightclubs and restaurants.

“The concern would be that once you introduce residents to that area – no matter how much we might say that they should go into it with their eyes wide open – once they’re there, we may have built a lot of objections to doing the kinds of things that the triangle really is most appropriately used for,” Vice Chair Peter Ostroff said.

Last month, the commission sought to put in place less strenuous parking standards that included no guest parking at all, as the included streets are “generally near high-quality transits and because reducing parking can reduce the cost of development,” Senior Planner Timothea Tway said.

The commission thought a less-strict parking requirement might encourage more developers to propose projects – which Beverly Hills is expected to desperately need, as the state is expected to require the city to build more than 3,000 new housing units this decade – but after the issue was raised multiple times during public comment, the commissioners agreed to require more parking for projects.

“We have to balance the interest of our residents with the needs of our city,” Chair Alan Robert Block said.

In addition, the average unit size of 1,750 square feet remains, despite the opposition by Commissioner Andy Licht, who said he believes the city will still need luxury and large units in addition to affordable units so that the existing residents don’t move outside of Beverly Hills when they want to downsize from single-family homes.

“I’m all for affordable housing. We need a lot. I don’t think this solves the problem. This to me is a square peg in a round hole. We don’t want to eliminate the opportunity to build larger units for people moving from other parts of the city who want to remain in the city,” Licht said.

Commissioner Farshid Joe Shooshani also continued his statements from last month that the ordinance should do even more to encourage housing to be built so that Beverly Hills doesn’t “lose our cityhood to the state.”

“Unfortunately, change is coming, and change is coming in a massive way to Beverly Hills … What’s going on is the result of 40 years of NIMBYism. There is a shortage of housing everywhere in the state … It’s coming to roost and we’re having to deal with it,” Shooshani said.

While much of the discussion was done during Gordon’s recusal, she returned for the final portion of the meeting and urged more public outreach on the topic, something for which multiple public speakers criticized the commission. Gordon pushed for additional public meetings that would allow for more back-and-forth conversations between city staff, officials and members of the public.

“To say that public comment is the same as a public meeting is not true,” Gordon said.

The other commissioners, however, defended the process, pointing out that mixed use has been a topic of discussion since 2018 and their meetings on the topic, including this one, have welcomed public participation.

“I think this is being vetted, and this is the way the process works. We’re having public hearings and everybody’s voice is going to be heard,” Block said.

Ostroff argued that it’s “fake news” that the decisions are being made outside of public view.

“I will not accept that premise for a minute,” Ostroff said.

Licht added that he thinks “a lot of people just didn’t have time to pay attention until now.”

Block also argued that the criticism from all sides means that the commission had done its work fairly.

Ryu calls for ‘Slow Streets’ program to be permanent