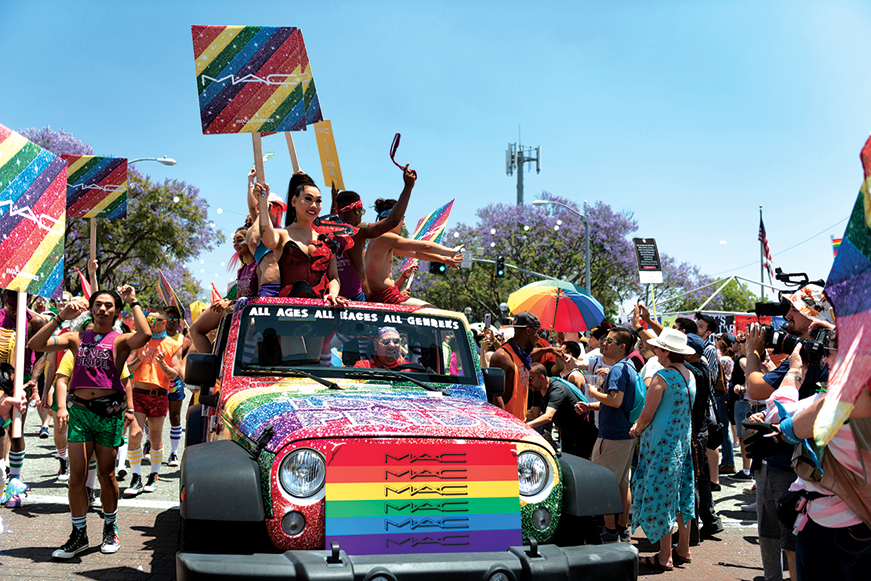 Due to the coronavirus pandemic, this year’s Pride will be celebrated online. (photo by Jon Viscott/courtesy of the city of West Hollywood)

The city of West Hollywood celebrates the artistic achievements of the LGBTQ community with its One City One Pride LGBTQ Arts Festival. This year, due to the coronavirus pandemic, the community is turning to online events to substitute in-person gatherings and celebrations.

Michael Che, city of West Hollywood arts coordinator, manages the One City One Pride LGBTQ Arts Festival, said “Pride and art have always been closely linked.” Many newsletters and magazines produced by early gay rights organizations included a mix of fiction, poetry and visual art, he added, such as Lisa Ben’s magazine “Vice Versa,” the first lesbian magazine in the United States.“Many founding members of LGBTQ rights organizations such as the Mattachine Society, ONE and ACT UP were playwrights, writers, designers and other types of artists,” Che said.

Since no in-person meetings are possible, the festival which runs for 40 days, starting on Harvey Milk Day on May 22 and continuing through Tuesday, June 30, will transition to online gatherings organized by city staff along with community groups.

Che, who also oversees the WeHo Reads author series and art exhibitions at the West Hollywood Library, said planning for One City One Pride is a year long process.

In most years, he’s busy from February to May overseeing the creation of the festival booklet, booking spaces and determining logistics, building the website for the event and planning a marketing campaign, but this year was different.

“The city is taking every precaution to ensure the health and safety of the public,” Che said. “We offered our One City One Pride grantees the option of moving to an online digital platform, as long as social distancing was observed with all actors/artists presenting from their own homes.”

This year’s One City One Pride celebration will consist of programs city staff and artists were able to adapt to an online format. Artists who are selected receive a small stipend to help them create their artworks, including poetry and plays.

“We have to hold onto our Pride more than ever this year, and I [was] overjoyed to be part of kicking-off a virtual platform of One City One Pride events with the reading of ‘Dear Harvey’ on Harvey Milk Day,” Horvath said.

The city has a long history of recognizing Harvey Milk Day, and the first official celebration was held in 2010. Milk became the first openly gay elected official in the history of California when he was elected in 1977 to the San Francisco Board of Supervisors.

Horvath added that Pride is about sharing stories, experiences and moments, like meeting a first partner or a person’s first time attending the Pride festival.

“People are getting really creative and I’m inspired by that,” Horvath said. “People are creating the space, regardless of the coronavirus, to keep celebrating.”

Pride Poets will be held every Friday through the month of June from 6 to 8 p.m., and will feature poets who will perform works they wrote about a fellow LGBTQ member’s personal history while protecting their anonymity. They will also produce “Pride Poets’ Poetry Care Packages from Quarantine,” responding to custom poem requests from the community that were submitted at pride.weho.org/pride-poets.

“Last year, the Pride Poets wrote over 600 poems for the public at One City One Pride events,” Che said. “Often people who received poems were moved to tears. This year, that project is online and the poems will be shared on our website for the public to enjoy.”

Additionally, at the end of each week, Pride Poets will curate a half-dozen poem excerpts to produce WeHo Chalk Poetry on sidewalks throughout the city.

On June 20-21 at 4 p.m., the Alliance of Los Angeles Playwrights Pride Playreading Festival will feature virtual readings of plays chosen from submissions by a panel of judges. Short plays will be read on the first day, and the following day, organizers will feature a virtual reading of a full-length play.

To RSVP, send an email to events@laplaywrights.org with your full name and whether you would like to attend the short play readings, the full-length play, or both, no later than 5 p.m. the day before each event, and organizers will send a Zoom link.

On June 27, at 7 p.m, New Stages and the Los Angeles LGBT Center Senior Services Department will present “Out of the Dark,” an online event featuring LGBTQ seniors sharing their coming out experiences through song and storytelling.

In addition to the Pride Poets, Che said he is excited about “Out of the Dark.”

“The city has supported the project for seven years, and it’s one of the most moving experiences of the festival,” Che said.

A virtual panel discussion about Netflix’s documentary “Circus of Books,” which includes conversations with Circus of Books owners Karen and Barry Mason, documentarian Rachel Mason and activist Buck Angel, will close the arts festival on June 30 at 6 p.m.

“Art is infused in so much of what we do, and it can serve as a lens through which people can learn, understand and celebrate,” Che said.