WeHo Park project may be completed in 2021 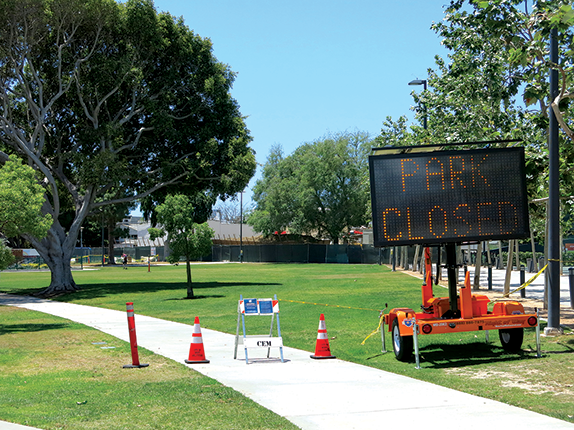 The COVID-19 pandemic has temporarily closed or slowed down sectors of the economy, yet construction is one industry that continues, Councilwoman Lauren Meister said.

“The construction team sat down to develop a plan intended to shorten the timeline due to the current circumstances,” said Steve Campbell, Facilities and Recreation Services Department director. “We were able to come up with something that would shorten that by approximately 250 days and provide a new completion timeline of September 2021.”

This would mean the contractor would be able to remove the existing facilities and pool, and begin the landscaping and playground work that was scheduled for completion late 2022. Certain elements of the park such as the auditorium, aquatic center, park offices, playgrounds, tiny tot building and public access studio will be closed.

Under the new work timeline, the city will save $850,000 that can be used for other services, according to Councilman John Duran.

Additionally, the City Council authorized the issuance of bonds worth up to $100 million. A majority of that money would help fund the remaining $50 million in work that needs to be done for the park project, according to Assistant City Manager David Wilson.

A staff report detailed the bonds will also finance other capital projects such as purchasing commercial properties located at 8301 Santa Monica Blvd. and the Log Cabin, the development of a parking lot at 8120 Santa Monica Blvd., the underground of utility poles throughout the city, implementing the Design District Streetscape Master Plan which includes purchasing and installing LED street lamps, two new traffic signals and upgraded on-street parking meters.

West Hollywood resident Larry Block, a 2020 City Council candidate, questioned why the city chose to issue lease revenue bonds, which have fluctuating rates, rather than general obligation bonds, a municipal bond backed by the credit and taxing power of the city, which normally have lower interest rates. He was also concerned about consequences if the city was unable to pay its debt to investors.

“One percent more is a million dollars a year,” Block said. “More importantly, general obligation bonds are owned by the city and not a third party. If the city fails on lease revenue bonds, the holder of the bonds will own our park. And if we default, then what? Will we have to pay admission to the park like some pay admission to drive in the fast lane?”

Block suggested the council be conservative when it comes to the city’s economy, especially since bonds will be repaid by future generations.

City Manager Paul Arevalo said this is a long-term strategy that will give the city flexibility going into the future, as the city is hoping for a 2% or 3% interest rate.

“The targeted goal here is to issue the debt and lock it in at some of the lower rates that we’ve ever seen,” Arevalo said. “It is something that is a finance strategy that provides us flexibility within the general fund, but if in the end, we get prepared to issue the debt and the rates are something that is not acceptable, we can walk away from the deal with some costs.”

Historically, the city has received favorable interest rates on its bonds because of its AAA general obligation bond rating and AA+ lease revenue bond rating, the highest possible ratings a credit rating agency can give, Arevalo said.

“We are essentially financing these public improvements over time by issuing debt and agreeing to pay for it over time rather than drawing down on all of our current resources,” Mayor Pro Tempore John Heilman said.

Duran said he supports issuing the bonds and leaving the city’s reserves available to address other issues such as food insecurity and rental assistance.

“We don’t know what lies ahead,” Duran said. “Whatever comes our way, we are going to need to have the ability to respond to it quickly to make sure people are not harmed or hurt.”

The city has previously issued bonds three times to pay for the West Hollywood Park project, and this newest round of bonds will increase the city’s annual repayment from $9 million to $11.5 million, a cost Wilson said the city can afford to pay.

City staff hope to move forward with the remainder of the project and finish it sooner, so it may be ready for the community when the city reopens.

Health and safety orders issued by the state and Los Angeles County limit the use of parks and facilities, and it is unclear when or if those spaces will be fully usable in the foreseeable future. However, when it is time to reopen, city staff anticipates that use will be limited with strict social distancing and other guidelines in place.

Campbell said he and his staff are working with the state and county of L.A., and they are awaiting guidelines from the Centers for Disease Control and Prevention before allowing full use of the park for swimming and contact sports, but his best estimate is that it will be within six months or longer.

According to a staff report, this creates an opportunity for the city to officially close elements of the park with minimal disruption and expand the project footprint. It would also allow for construction of the AIDS Memorial to begin earlier than what was previously planned.

However, West Hollywood resident Brendan Tickner, a member of WeHo Dodgeball, disapproved of the city’s action. In previous outreach meetings, park users such as the dodgeball organization were guaranteed they would be able continue playing during construction, he said.

“Closing the park in phases was never about saving money or time, it was about doing what’s best for the community,” Tickner said. “WeHo Dodgeball is a huge part of the community of West Hollywood and utilizes the park and auditorium that has provided a safe space for people of all types for 10 years.”

During discussion, other park users, such as volleyball players and other members of WeHo Dodgeball, flooded council members’ emails and sent texts concerned about closing park spaces.

Duran addressed their concerns and said he understood the camaraderie and community building that has happened among park users and the greater community, as he has seen it first-hand at their tournaments.

“We are all missing that family aspect of community growing together, but given the reality that team sports are not likely to be reopened by state or county for at least six months, if not longer, we should take advantage of this opportunity to make lemonade out of lemons and accelerate the construction, so that we can have a grand reopening when your teams are ready to play again,” Duran said.

Heilman agreed with Duran, but was appalled that so many park users were unable to voice their concerns sooner.

“The emails we got today indicate that we clearly did not do a great job of outreaching to the users,” Heilman said. “That to me is a problem.”

He added it is critical the city works with parks users in the event they are allowed to resume their activities and examine alternatives whether that’s outdoors, or moving to another facility in the city or neighboring cities.

Arevlo suggested the City Council move forward with the item and have staff come back in July or August with a strategy on how the city will create temporary spaces for residents to continue their park activities.

“It’s clear that moving forward with this item is the best option in terms of getting our park completed, managing our finances responsibility and getting as close to all the outcomes as we intended when we first set this out,” Mayor Lindsey Horvath said.