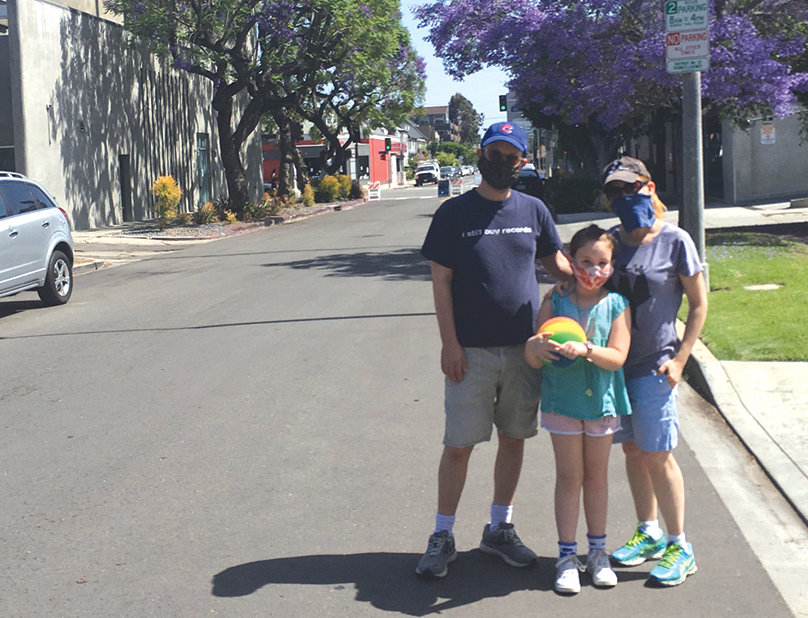 Angelenos are taking to the streets in new ways in the Beverly Grove, Fairfax and Melrose districts as part of the Mid City West Community Council’s implementation of the city’s “Slow Streets” program.

The program was launched by Mayor Eric Garcetti in mid-May in the Del Rey and Sawtelle communities, and later adopted in Eagle Rock. On May 23, the Mid City West area became the fourth neighborhood in Los Angeles to implement the program, which includes signage to reduce traffic on residential streets while encouraging passive uses on roadways such as walking and cycling.

“People are really enjoying this green space that they need right now,” said Scott Epstein, chair of the Mid City West Community Council. “The signage is placed in the middle of the street and has a traffic-calming effect. We hope people will take advantage of it.”

The Mid City West’s ”Slow Streets” program includes Sweetzer Avenue between Colgate and Oakwood avenues, Oakwood Avenue between Sweetzer and Hayworth avenues, Hayworth between Oakwood and Rosewood avenues, Rosewood from Hayworth to Formosa Avenue, and Formosa Avenue north to Willoughby Avenue. Although the signage is placed at intersections and people are encouraged to walk, ride bikes and use other alternative forms of transportation, cars can still travel on the streets. The idea is to reduce cut-through traffic as much as possible, while giving residents a new way to safely exercise and adhere to social distancing recommendations. 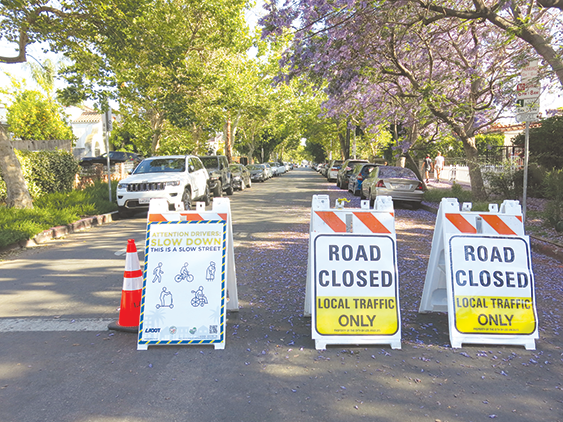 Streets like Formosa Avenue are limited to local car traffic only as part of the “Slow Streets” program. (photo by Cameron Kiszla)

Epstein said the project was a natural fit for Mid City West, which is in the process of creating its Neighborhood Greenway Project along Rosewood and Oakwood avenues. That project includes special stoplights being installed that allow pedestrians and cyclists to cross intersections before vehicle traffic receives a green light, as well as bollards in the street that require vehicles to turn right. One of the stoplights and the bollards were installed at Rosewood and La Brea avenue last fall and more are planned in the future at Rosewood/Crescent Heights and Rosewood/La Cienega.

The “Slow Streets” project overlaps part of the Neighborhood Greenway Project area, particularly the stretch along Rosewood Avenue. Epstein said the neighborhood council submitted plans for “Slow Streets” to the Los Angeles Department of Transportation, which placed the signs in the area last Saturday. They wanted to create the open spaces in areas without immediate access to green spaces like Pan Pacific and Poinsettia parks.

“I enjoyed walking the newly designated ‘Slow Streets’ in my district,” said Koretz, who lives in the Beverly Grove community. “From what I could see, the majority of participants followed the rules, wore masks and seemed to have a good time. I know that I personally enjoyed it and walked the whole thing. I saw families out on their bikes, on foot and scooters, with young kids who felt safe and comfortable exploring the neighborhood. It wasn’t overcrowded and gave a nice bit of time for social distancing. I think this is a great idea.”

Epstein said he hopes the idea will also expand to other parts of the city, and perhaps a continuous route could be created among neighboring geographic areas.

“I think the opportunity exists here, and ’Slow Streets’ could serve as a catalyst for that,” Epstein said. “One of the few things people can do right now is being outside and walking, and that is difficult with our skinny, crowded sidewalks.”