Sidewalk repair begins after trees are spared the ax 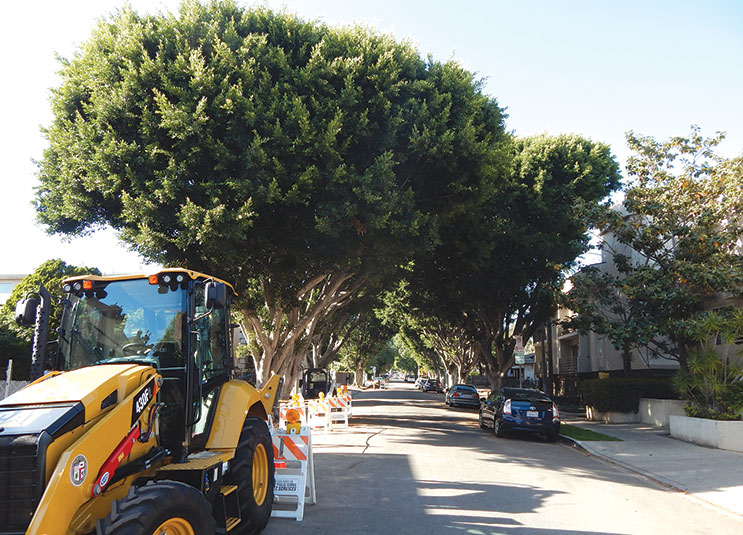 The city found a way to repair sidewalks along Cherokee Avenue while preserving ficus trees that have created a shady canopy over the street. (photo by Edwin Folven)

Crews have begun sidewalk repairs in the 1200 block of Cherokee Avenue, where roots from mature ficus trees lining the street damaged the concrete in many places.

The city had initially planned to cut down 18 ficus trees along the stretch of Cherokee Avenue between Fountain and Lexington avenue in 2018, but opposition surfaced from the nonprofit United Neighborhoods of Los Angeles, which contended the trees should be saved because of the shade their canopy provides. Some of the ficus trees have been in place for 80 years.

Los Angeles City Councilman David Ryu, 4th District, stepped in and worked with Bureau of Street Services General Manager Adel H. Hagekhalil to create a new plan that spared 14 of the 18 ficus trees. After receiving City Council approval for the new plan last year, the bureau created a design for the project. The city pruned the tree roots and is using a meandering sidewalk design around roots that enabled a majority of the trees to remain. Ryu said it is an example of how a new approach can have positive results.

“When the city told me that we had to remove these beautiful, mature ficus trees to make way for new sidewalks, I thought, there has to be a better way,” Ryu said. “I got to work with our department and we found that better way – saving most of these trees on Cherokee and repairing our sidewalks. We can be a city of safe sidewalks and rich urban canopy, we just need to be willing to think outside the box.”

Paul Gomez, a spokesman for the Los Angeles Department of Public Works, said the sidewalks are currently being repaired on the west side of the street, and that work should be finished by the end of next week. Crews will then shift to the east side of Cherokee Avenue and the project is anticipated to be completed soon after, although an exact timeline was not available.