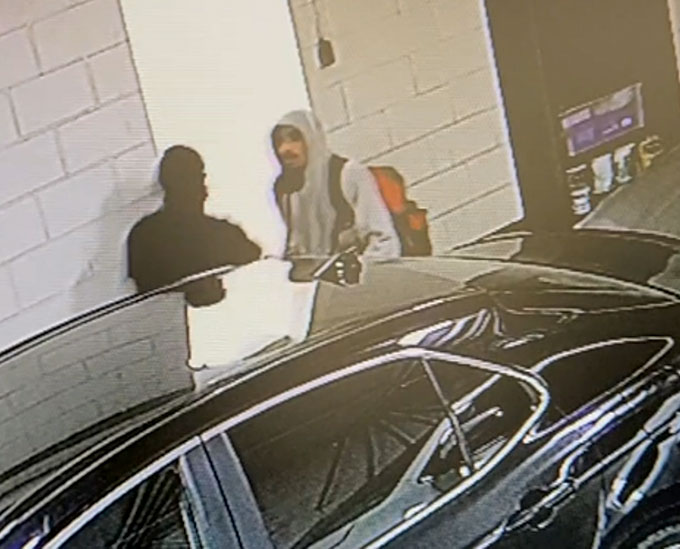 A security camera captured two thieves as they checked for unlocked car doors in an apartment building garage before committing a burglary. (photo courtesy of the LAPD)

Auto thieves have recently been targeting tandem-parked vehicles in underground garages at apartment buildings in the Wilshire Division, prompting a warning from detectives to take precautions.

Detective Sam Arnold said the burglars are frequently targeting cars that are left unlocked so family members or other people in the same unit can easily move the vehicles. Sometimes, the vehicles are locked and keys for another vehicle are left inside, and thieves break in to steal them to gain access to other cars.

“Due to the pandemic, a lot of people are not going to work, they are staying home and there are a lot more vehicles parked. Overall, crime has decreased, but auto crimes are an outlier,” Arnold said. “Grand theft autos, in particular, are on the rise. One of the things we are seeing is problems with cars that are tandem parked in subterranean garages. Over 50% of all the cars being stolen are due to keys being left in the vehicles.”

Arnold said he understands the convenience of leaving keys in cars so others can easily move them, but he would never do it.

“I do not recommend it. People have been letting their guard down, unfortunately,” he said. “[The suspects] are sneaking in and checking vehicles, and will steal them.”

Police released a security camera image taken in the garage of a building in the Little Ethiopia District on April 20 in which a pair of thieves is seen attempting to open vehicles. The video shows the men checking every door on each vehicle in the garage, looking for one that is unlocked. In that case, the suspects burglarized but did not steal a vehicle. One of the suspects was wearing a hooded sweatshirt and the other a hat and mask, so police were unable to get a clear description. Anyone with information about the crime is asked to call police. Arnold said the incident illustrates the need for protections.

Most of the thefts have occurred in an area between La Cienega Boulevard and La Brea Avenue, and Sixth and Third Streets, where there are a large number of apartment buildings. A majority of the auto thefts have occurred from 11 p.m. to 5 a.m. Thieves have stolen older cars, which can be started using altered keys, also known as “shaved” keys, Arnold said. There has also been an increase in thefts of license plates, which thieves transfer to stolen cars. Arnold said of the three stolen vehicles recovered in the Wilshire Division last weekend, two had stolen license plates.

The detective cautioned people to be careful that nobody follows them inside when entering a garage, and to not allow strangers inside building lobbies or parking areas. He also said security cameras and apps including Ring help police identify suspects, and online platforms like Nextdoor are helpful in allowing residents to share information about thefts in their neighborhoods.

“The message is, make sure your car is locked and you are looking out for your neighbors,” Arnold said. “Be wary of people inside your building. Call the police if you see something suspicious.”

Arnold added that auto burglaries have perennially occurred more frequently than auto thefts in the Wilshire Division, especially with people shopping and leaving items visible inside cars. He added that during the coronavirus pandemic, tourists and others are not parking in neighborhoods like the Melrose District and at large shopping centers such as The Grove and Beverly Center, so there are less vehicles for thieves to target.

“The dynamic has shifted,” he added. “It can be very challenging. The more communication and education, the better.”

People with information about auto thefts and burglaries are encouraged to call Wilshire Division detectives at (213)922-8205, or email wilshireautos@lapd.online.