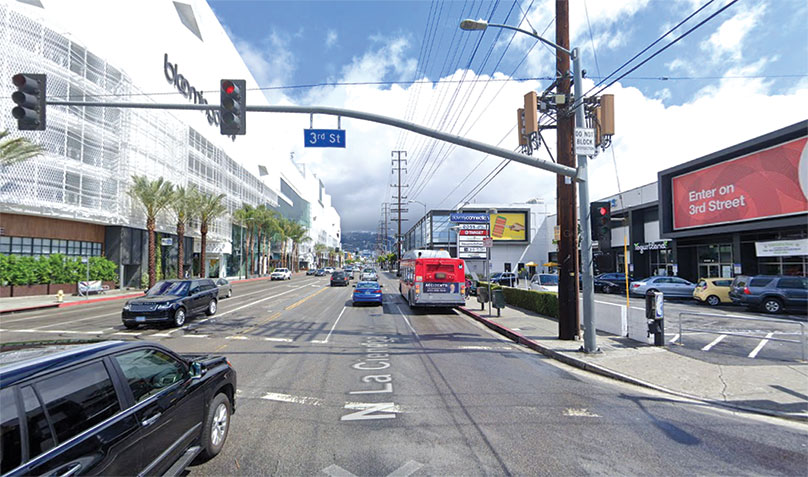 A female victim is recovering after being struck by a vehicle on May 23 at the intersection of La Cienega Boulevard and Third Street. (photo courtesy of Google Maps)

Police are searching for a driver who struck and severely injured a female victim at La Cienega Boulevard and Third Street on May 23.

The hit-and-run collision occurred at approximately 9 p.m. as the unidentified victim was walking westbound across La Cienega Boulevard in a marked crosswalk along the north side of the intersection. The vehicle was traveling southbound on La Cienega Boulevard when it struck the victim.

Officer Joel Twycross, with the Los Angeles Police Department’s West Traffic Division, said investigators searched the area for security cameras and obtained footage showing the collision. The vehicle, a dark-colored, four-door sedan, did not appear to be traveling at excessive speeds, he said.

Police are also investigating whether the victim had the right of way when the collision occurred, as the camera footage shows other traffic moving in both directions on La Cienega Boulevard, indicating those motorists had a green light and the victim may have been crossing against a red light.

“It’s still under investigation,” Twycross said. “[She may have had] a ‘Don’t Walk’ sign. We are trying to figure out exactly what happened.”

If the victim had been crossing without having the right of way and the driver stopped, the collision may have been considered an accident. Because the driver fled the scene, it is considered a felony hit-and-run collision.

Twycross said the camera footage shows another pedestrian running up to the victim seconds after she is struck, and detectives would like to speak to that individual. Multiple motorists also stopped momentarily but also left the scene before officers arrived.

“It looks like a few cars ended up stopping. People got out and walked up to her,” Twycross said. “We could potentially have a total of four people who saw this or may have information. Anything they can add would help.”

The victim was taken to a hospital and treated, and is expected to survive. Twycross had no further information about her identity or the severity of her injuries.

He added that the incident illustrates the need for pedestrians to always monitor their surroundings, particularly when crossing streets. Whether or not a pedestrian has the right of way, it is always important to look around to ensure vehicles are not approaching.

“Obviously, it can be very dangerous,” Twycross said.

A standing $25,000 reward is available for information that leads to an arrest and conviction of a perpetrator of a hit-and-run collision, per a Los Angeles City Council order issued in 2015.

‘The Good Fight’ packs all the legal drama, mixed with politics