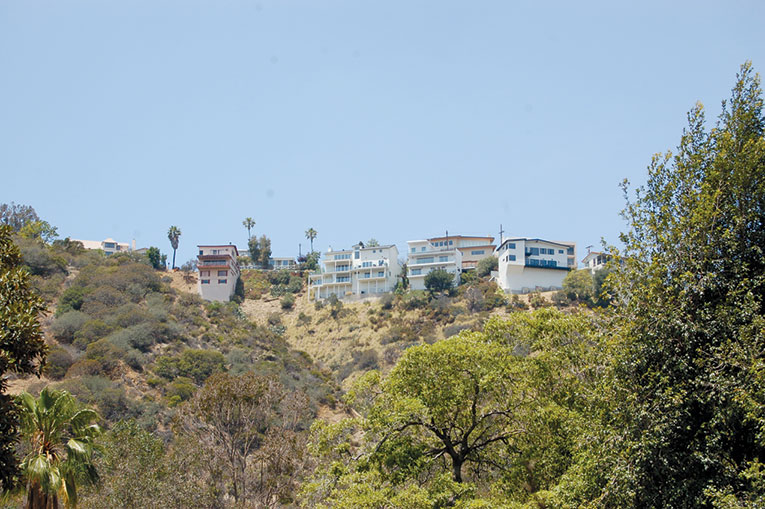 A special LAPD patrol car responds to loud parties in the Hollywood Hills on weekends. (photo by Edwin Folven)

A man in his 20s is recovering after accidentally shooting himself in the groin on May 16 at a house party in the Hollywood Hills.

Police received calls at approximately 10:30 p.m. about people gathering and loud noise at a party at 1410 Miller Drive, located in the hills above Sunset Boulevard and West Hollywood. Officers from the Los Angeles Police Department’s Hollywood Division arrived to find up to 100 people at the house, in violation of the city’s “Safer at Home” order during the COVID-19 emergency. Officers were ordering people to disperse when a gunshot rang out, prompting people to flee in all directions, said. Lt. Mike Rippe, with the Hollywood Division. Police found a man suffering from a gunshot wound. The unidentified man was taken to a hospital, treated and released within 48 hours, Rippe added.

“He had the gun in his waistband and ended up shooting himself,” Rippe said. “This was a tactical nightmare from a police perspective. People were leaving the party and then a shot rings out, and you had people running for their lives.”

The shooting was determined to be accidental and no arrests were made. It is unclear if the gun belonged to the unidentified man who shot himself. Detectives are still investigating and are looking into whether the man was “playing” with the gun and may have caused it to fire when he stuck it in his waistband, Rippe said.

“That’s the reason why we as police officers wear holsters,” he added. “With something like that, there are so many things that can go wrong.”

The incident was troublesome on many other levels, he said, including the fact that such a large party was occurring while the “Safer at Home” order is in effect. Rippe said the investigation has determined that the home had been rented through Airbnb and was supposed to be used for a birthday party with no more than 10 people. The number of people attending grew exponentially, however, after word spread on social media. Rippe said it doesn’t appear to be an incident in which someone rented the house under false pretenses and then planned a big party, rather a situation beyond the homeowner and renter’s control. Authorities consider the situation an anomaly and will be working with the owner and Airbnb to prevent similar occurrences in the future.

The city enacted a party house ordinance in 2018 after years of complaints by community members about people renting houses in the Hollywood Hills and using them for parties. Guests caused traffic that frequently clogged narrow streets and parking was a problem. The parties often lasted into the early morning hours, many times with loud music blaring. Some of the most egregious instances involved exotic animals being paraded along narrow streets and used at parties as displays and entertainment.

Los Angeles City Councilman David Ryu, 4th District, spearheaded the effort to enact the party house ordinance, which established a tiered system in which both the people renting houses and throwing parties can be cited and fined, as well as the property owner. Violations can be fined $100 for a first offense, and up to $8,000 for a sixth citation. Rippe said the Los Angeles City Attorney’s Office will file charges if a particular site remains problematic after six citations are issued. No citation was issued regarding the May 16 party, although the incident remains under investigation.

“Out-of-control party houses have been an issue for years, and it’s why we passed the party house ordinance in 2018,” Ryu said. “The coronavirus pandemic has created a new kind of party house, maybe not as big, but certainly a danger to public health and the community. I want to see these parties shut down, and to make sure we keep our hillsides from becoming a hub for house parties.”

Ryu’s spokesman Mark Pampanin said under the party house ordinance, an extra patrol car is deployed to the Hollywood Hills on weekends to respond when disruptive parties are reported. Funding to ensure the special patrol unit will be operational in the future will be preserved in the upcoming budget, he added.

Rippe said officers have the power to cite people in violation of the “Safer at Home” order but did not have any numbers as to how many citations may have been issued. He said the approach is educational unless an egregious situation occurs in which people refuse to obey orders to disperse.

“When groups have large parties, we are only finding out about them when someone calls and reports them,” Rippe said. “We will respond and make sure they are social distancing. If it’s an active party with a problem, we will issue a citation. If the problem continues, then we have the power to give out more citations and will take whatever steps are necessary. It’s one of the tools we have to address large parties.”