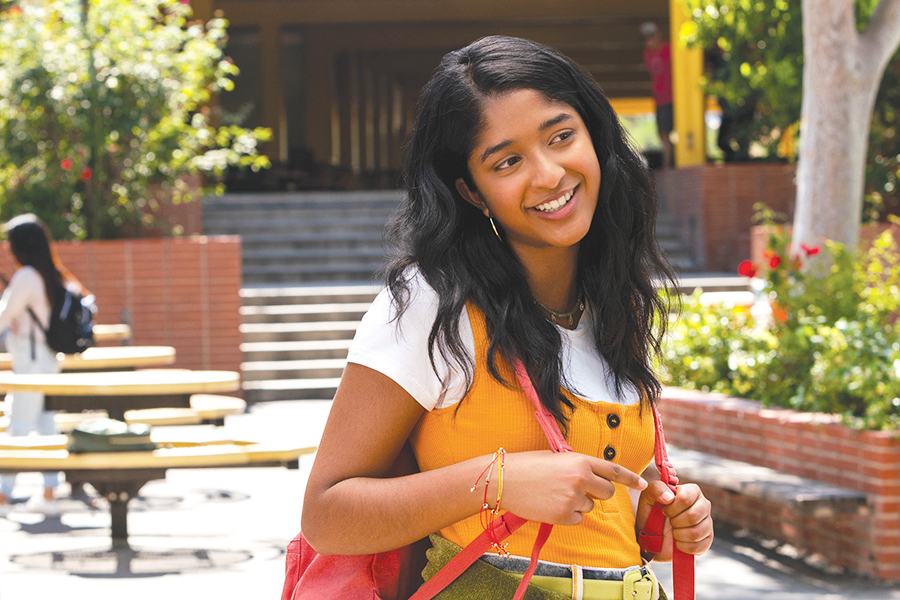 Maitreyi Ramakrishnan stars as high school student Devi Vishwakumar in “Never Have I Ever,” a fun comedy series co-created by actress and writer Mindy Kaling. (photo courtesy of Netflix )

In a TV world overrun with heavy dramas and half-hour dramas parading as comedies to sweep during an awards season that doesn’t enjoy laughing, sometimes light isn’t only OK, but a necessity.

Netflix’s “Never Have I Ever,” a teen comedy series about an Indian American’s misadventures, arrives just in time, earning well-deserved praise. Co-creator Mindy Kaling is a treasure, from her writing and character on “The Office” and her work on “The Mindy Project” to this immediate classic.

One of the most unexpected quarks of the series occurs in the first minutes of the pilot: the narrator is tennis legend John McEnroe commenting as himself (you find out why soon enough). As the former “Superbrat” explains, young Devi Vishwakumar (newcomer Maitreyi Ramakrishnan) had the worst first year in high school. She’s a driven student, even when the worst transpires: Dad (Sendhil Ramamurphy) has a heart attack during Devi’s harp recital.

Soon after, her legs call it quits for a few months. Only when Devi notices popular high school hunk Paxton Hall-Yoshida (Darren Barnet) shirtless do her lower limbs remember how to work once more. But that newfound mobility comes with a burgeoning desire for new experiences. Bound to leave her trauma in the past, Devi dedicates herself to (various failed attempts at) popularity and reaching home base with Paxton.

Paxton is the average cool kid with one exception, a sister he aggressively protects. But Ben, he’s another story. Season 1 cares much more about his journey, even letting McEnroe take a break for an episode to allow another familiar voice tell the tale (no spoilers here on who that is). 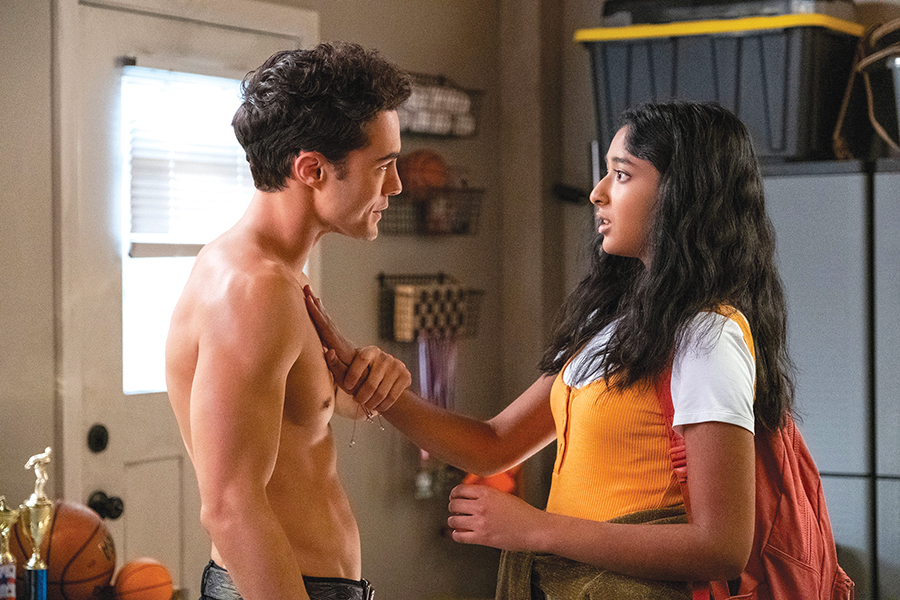 Darren Barnet appears as Paxton Hall-Yoshida, a popular high school hunk who has Devi’s (Maitreyi Ramakrishnan) attention in “Never Have I Ever.” (photo courtesy of Netflix)

Regardless of who Devi chooses, the most important dilemma is how Devi deals with all those memories of dear dad that erupt from her unconscious at the most inopportune times. She’s a high schooler, so expect an emotional ride. But it’s an entertaining one overflowing with personality, even amidst those awkward moments.

Now, before you write this one off as too juvenile, “Never” focuses on the entire Vishwakumar family. Devi’s mother Nalini (Poorna Jagannathan) must survive the battleground of parenting a teenager alone. At least she has a little help from Devi’s cousin Kamala (Richa Moorjani), earning her doctorate in biology from Cal Tech, secretly dating a classmate and committed to an arranged marriage. What could go wrong?

For Devi, her Indian culture is not a badge of honor but a roadblock, an embarrassing hiccup on her way to an Ivy League university. That creates a fissure between her and mom, whose close ties to India are desperately missed under the smoggy skies of Southern California.

Kaling took the role of Devi quite seriously, looking over 15,000 contenders before choosing Ramakrishnan, who only had a few years of high school acting under her belt. That gamble pays off. Ramakrishnan’s performance is both charming and wonderfully authentic, a real teenager more than a “Juno” idealization of youthful zeal. This is the kind of career-defining role that will surely result in more appearances to come.

Along with McEnroe and Devi’s fam, “Never” enjoys a great many splendid supporting players: Devi’s Fabiola (Lee Rodriguez) – a science geek with a secret – and Eleanor (Ramona Young from CW’s “Legends of Tomorrow”), a drama kid with all the eccentricities that come with the gig. And, Niecy Nash (“Reno 9-11,” “Claws”) plays Dr. Jamie Ryan, Devi’s unconventional but still sage therapist.

“Never Have I Ever” is a delightful, binge-worthy series sure to return once film and television production commence once more. The first season follows Devi’s family and physical trauma, but that doesn’t magically end. The 10th episode ends on a fun cliffhanger that won’t be resolved for some time, but this ride shouldn’t wait. Check it out now; the laughs don’t take long to start rolling in.