Nate ‘n Al’s is back in business in Beverly Hills 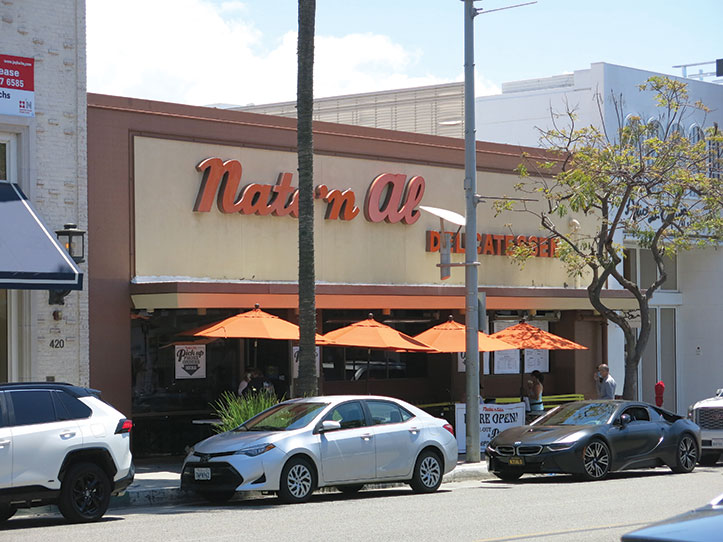 Nate ‘n Al’s has reopened on Beverly Drive, more than a year after plans were announced for a move to Canon Drive. (photo by Cameron Kiszla)

When Nate ‘n Al’s reopened on May 15 after closing in March, lovers of the deli at 414 N. Beverly Drive rejoiced, owner Shelli Azoff said.

“We’ve been completely overwhelmed by the love and support shown from our loyal customers – and due to such high demand, we have needed to temporarily reduce our new hours to Tuesday to Sunday, 11 a.m. – 6 p.m., closing on Mondays, so we can work out some of the kinks to better serve our customers,” Azoff said in a statement.

Azoff said the deli – a famed celebrity hangout – also came to an agreement with the building’s owners, the Cloobeck family, to stay on Beverly Drive “for the foreseeable future.”

The decision to remain on Beverly Drive puts in doubt the deli’s agreement last year to move to a new city-owned location at 443 N. Canon Drive that was once home to Wolfgang’s Steakhouse. The city approved a 10-year lease with the deli’s ownership group, Circus Clowns LLC, which is led by Azoff and her husband, entertainment executive Irving Azoff.

Shelli Azoff’s statement did not directly address the Canon Drive location or explain why the relocation has not yet taken place, and the public relations representative for Azoff who provided the statement declined to comment further. Beverly Hills spokesman Keith Sterling declined to comment. A representative of Stephen Cloobeck did not return requests for comment.

Azoff said the seven-week shutdown of the Beverly Drive location was for health reasons.

“Our temporary closure was needed to assess the safest and most efficient way to operate in this new environment, keeping our staff and customers’ well-being as top priority,” Azoff said.

For now, Nate ‘n Al’s offers a limited menu so that staff members can “efficiently operate” in a  socially distanced kitchen that includes spread-out deli stations and fewer staff members working at one time than normally would be the case, Azoff said.

“You will still find all of your much-loved Nate’s classics on this menu though, along with some new ‘family style’ meal offerings for dinner,” Azoff said. “Familiar faces will be there to take your order, including long-serving waitress, Gloria Leon, along with some new infusions to the team.”

In addition, Nate ‘n Al’s offers delivery service directly from the restaurant, not through apps like Grubhub, Postmates and UberEats.

“We’re offering delivery directly from Nate ‘n Al’s – not through a third-party service – in order to employ more members of our team, and provide greater control over the experience and safety precautions we are taking with to-go orders,” Azoff said.

Azoff added that “it means so much to us, personally, that we are able to keep Nate’s operating.”

“It’s a tradition so dear to not only my family, but many others in Los Angeles and we are just thrilled and truly overwhelmed at the support shown to us,” she said.

L.A. Surge Hospital to close at the end of June