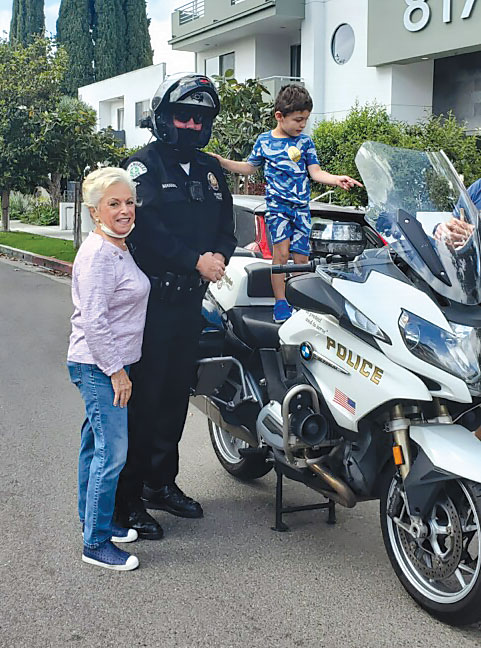 Five-year-old Beckett Dubash had the thrill of a lifetime on May 11 when Officer David Manning stopped by his family’s home on Alfred Street, just east of La Cienega Boulevard, to say thank you for donating children’s clothing to the Los Angeles Police Department’s Juvenile Division. Beckett and Manning were joined by Alfred Street resident Stefani Poretz, a volunteer with the LAPD’s Wilshire, West Traffic and Juvenile divisions. Poretz recently collected donations for the Juvenile Division, and Beckett’s father Ben Dubash donated a bag of children’s apparel and a child’s car seat. Beckett loves the LAPD, she said, and Manning, a motorcycle officer with the West Traffic Division and a friend of Poretz, was happy to oblige with a visit.

“David pulled up on his motorcycle and Beckett was absolutely beside himself,” Poretz said. “The child was over the moon. David let him sit on the bike and turn all the lights on. It was really something special.”

Poretz is continuing to collect new clothing and stuffed animals for donation to the LAPD’s Juvenile Division. Anyone who would like to help can email scporetz@gmail.com.