Los Angeles plans to clamp down on PPE litter 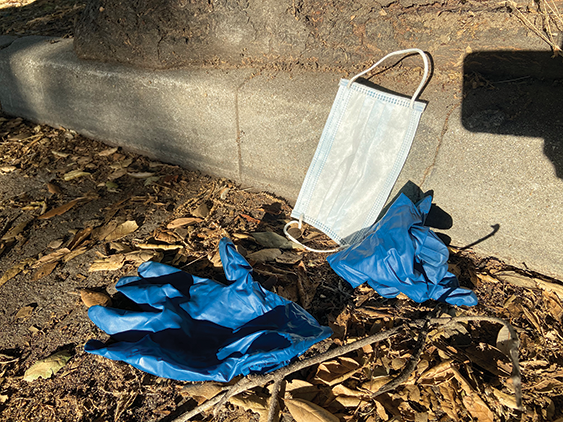 Masks and gloves are frequently being discarded on city streets, prompting calls for higher fines and education. (photo by Edwin Folven)

Fines for discarding used personal protection equipment such as masks and gloves in public may increase from $50 to $250 after the Los Angeles City Council approved measures on May 26 to explore options for better enforcement.

The decision came as a growing number of masks and gloves have been littering city streets, parking lots and other public areas. Councilmen Bob Blumenfield, 3rd District, and Mitch O’Farrell, 13th District, authored a motion to set fines for littering masks and gloves at $250. That is in addition to state laws regarding littering, which include fines up to $1,000 for a first offense, $1,500 for a second infraction and $3,000 for a third offense.

O’Farrell also authored a motion to create an educational campaign about the dangers of discarding masks and gloves, which is tantamount to throwing medical waste on the ground, he said. The goal is to inform people while also providing authorities with an enforcement mechanism to prevent the problem from worsening.

“As the COVID-19 emergency continues, using PPE properly is one of the most important things we can all do to stay safe. But as its use has increased, we have seen a disturbing trend of littering this potentially dangerous waste on sidewalks, in parking lots, along green ways and sometimes even right next to a public trash can,” Blumenfield said. “The littering of one’s gloves or masks is particularly pernicious because many people are doing so because they believe that these items might be contaminated. This is not only disrespectful, but dangerous to the community and to the workers who end up cleaning up their toxic mess.”

O’Farrell agreed that discarding PPEs is a potentially dangerous practice that needs to be curtailed.

“We saw almost immediately the effects of discarded masks and gloves … as early as mid-March, when people started self-isolating and utilizing personal PPEs for themselves. We began to see this trash from these gloves and masks, etc., all over the ground, in the gutters. They’re littering our parks, they are everywhere,” O’Farrell said. “It speaks to the need for an educational piece as much as anything. And, it also unfortunately speaks to a collective lack of respect for one another in public. I urge folks to consider, anytime you throw any piece of trash on the ground, much less something that’s possibly contaminated, the level of disrespect that is for others and the public.”

The Los Angeles Bureau of Sanitation requested that the City Council look at creating more deterrents to littering, and cited the health dangers that discarded masks and gloves present. The council asked the Los Angeles City Attorney’s Office and the Bureau of Sanitation to work together on establishing the fines and report back as soon as possible. The educational program is moving forward concurrently.

“In an effort to remind the public to not litter streets and parking lots with used and potentially contaminated gloves or masks, the Department of Public Works has mounted an education campaign through informational flyers and public service announcements with the support of the council offices, neighborhood councils, business improvement districts and community groups,” said Department of Public Works spokesman Paul Gomez.

“I am pleased to support Councilmember Blumenfield’s effort to mandate and enforce the proper disposal of masks and gloves,” Koretz said. “They aren’t only litter, they are hazardous waste and someone, including our sanitation workers cleaning them up, could actually catch the virus from them.”

O’Farrell said the plans could make a difference in making the city safer and more beautiful at the same time.

“It’s a real opportunity for the city to show how important it is to keep our neighborhoods cleaner,” O’Farrell said.

Councilman David Ryu, 4th District, said in a statement that he “fully” supports the tougher penalties.

“Wearing a mask or glove just to throw it on the ground doesn’t help stop the spread of COVID-19. In fact, it puts everyone at risk,” Ryu said. “When you carelessly throw a mask on the ground, you could be spreading a deadly virus into a new community  and forcing others to put themselves in danger to clean up after you. People need to be responsible for their masks and gloves.”