Keeping a lifeline in place for seniors in need 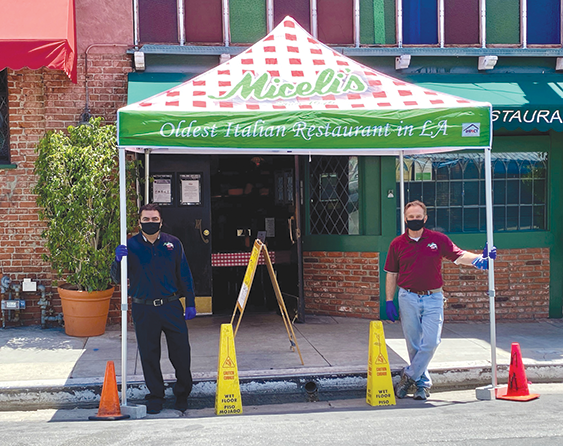 Frank Miceli, right, owner of Miceli’s Italian Restaurant in Hollywood, has been preparing meals for delivery to seniors. Josue Tovar, left, who regularly works as a bartender and server, is helping at their curbside service tent. (photo courtesy of Hollywood Chamber of Commerce)

The Hollywood Chamber of Commerce is known for hosting elaborate star ceremonies with celebrities on the Walk of Fame and representing Tinseltown’s many famous businesses, but the staff has switched gears during the COVID-19 pandemic and is currently working to ensure seniors and others in need have meals and necessities to keep them healthy and safe.

Known as the Hollywood Unites Initiative, the program grew out of an earlier partnership with the Central Hollywood Neighborhood Council. When “Safer at Home” orders were issued in March, the neighborhood council launched a program to deliver meals and groceries to seniors and others at higher risk of contracting the coronavirus so they didn’t have to go to stores. Members of Hollywood Chamber of Commerce’s staff supported the program by calling seniors and identifying who needed help. The neighborhood council program ended earlier this month, as was planned from the beginning, and the chamber of commerce stepped in to fill the need. Through financial support and donations from members and help from Hollywood restaurants, the chamber has been able to continue offering free meals on a limited basis.

Rana Ghadban, president and CEO of the Hollywood Chamber of Commerce, said the initiative is supported by the Hollywood Chamber Community Foundation, which is raising more money to sustain the program. Approximately $25,000 was used for the effort, which involves meal delivery as well other necessities. Many businesses have also donated items during the pandemic, and the chamber has coordinated their delivery to organizations supporting people in need.

Ghadban said the Hollywood Unites Initiative is a natural fit for the chamber of commerce, which provides support to keep the Hollywood community thriving.

“We saw the significant needs of the community and we started hearing from restaurants who were members of the chamber who wanted to help, and we began to connect the dots,” Ghadban said. “We have been doing the deliveries two times a week. We make the calls to seniors who expressed needs in the Central Hollywood Neighborhood Council program. It’s very rewarding to make sure we are getting meals to the people who need them most and supporting our local businesses at the same time.”

The chamber pays for the meals and staff make the deliveries. Local restaurants that have partnered include Miceli’s Italian Restaurant, Hoy’s Wok, Al Wazir Chicken and Jersey Mike’s. Miceli’s, a landmark at 1646 N. Las Palmas Ave. since 1949, prepared approximately 30 orders of fettuccini with chicken, spaghetti with meatballs and spaghetti with marinara sauce for delivery on Tuesday.

“We are happy and excited to be on board,” owner Frank Miceli said. “It’s something we have been doing for a lot of years, giving back to the community. We try to do whatever we can whenever we can to help.”

Al Wazir Chicken at 6051 Hollywood Blvd. has prepared chicken, beef and lamb kabobs for delivery as part of its effort to help.

“We are happy to participate. Anything we can do to bring a smile to someone’s face right now is good,” said employee Rafael Stepanian, who is helping to prepare the meals for delivery. “We are happy to work with the chamber and help people in any way we can.”

Ghadban said the chamber is seeking more donations and hopes to continue the initiative as long as it is needed. She said the hope is for a safe return to normalcy in Hollywood as businesses are slowly allowed to reopen, and in the meantime, the Hollywood Chamber of Commerce will continue to support its members and the community.

“I am very hopeful. Hope is what keeps you alive. We are trying to follow all of the changes with the efforts of the mayor and county and the governor of California about the stages of reopening,” Ghadban said. “Hopefully soon, we will be able to return to having businesses open and people returning to Hollywood Boulevard.”