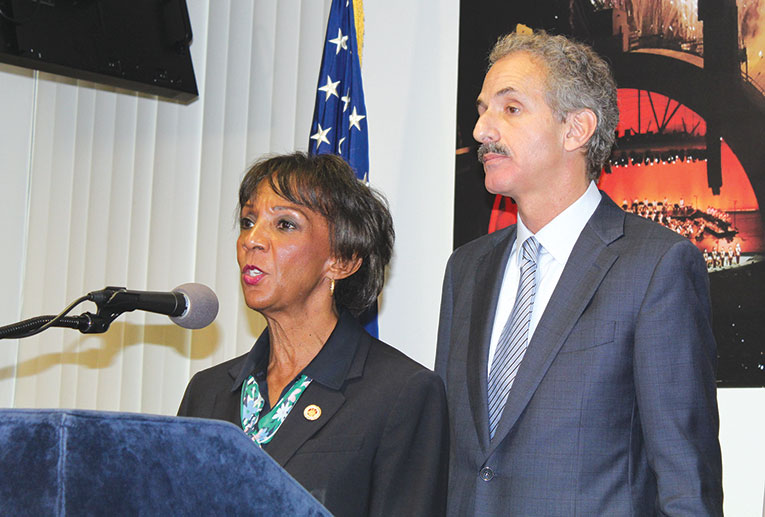 Los Angeles City Attorney Mike Feuer and Los Angeles County District Attorney Jackie Lacey announced on May 1 that they are seeking an injunction against a Beverly Hills company for allegedly selling an in-home COVID-19 antibody blood test not approved by the U.S. Food and Drug Administration.

Applied BioSciences Corp., its president Chris Bridges, and founder and chairman Scott Stevens were named in a complaint alleging unlawful advertising and sales of the test. Feuer and Lacey, working in partnership with the federal Department of Justice COVID-19 Fraud Task Force in Washington D.C., are seeking an injunction to prevent the tests from being sold in the future, restitution for customers who bought it and civil penalties.

“This is yet another alleged example of an attempt to cash in on fear and anxiety in this crisis, with tests whose results can’t be trusted,” Feuer said. “With so much emphasis on testing, companies selling non-approved tests build false hope and sow confusion. In this crisis, Angelenos’ health depends on accurate, reliable information and legitimate products that can actually help them.”

“Fraudulent medical testing can give consumers a false sense of hope that may contribute to the spread of the coronavirus,” Lacey added. “People who believe they are healthy are more likely to return to work and otherwise move about more freely, increasing the risks to themselves and others. These types of scams jeopardize the health of us all.”

Feuer and Lacey said Applied BioSciences is a corporation with offices in Beverly Hills. The company allegedly claims it “is focused on the development and commercialization of novel, science-driven, synthetic cannabinoid therapeutics/biopharmaceuticals that target the endocannabinoid system to treat a wide-range of diseases.” The investigation by Lacey and Feuer revealed that the defendants allegedly marketed the antibody test to “homes, schools, hospitals, law enforcement, military and public servants,” and claimed the tests could diagnose COVID-19 with “96.3% accuracy” in just “15 minutes” from a single finger prick of blood. Applied BioSciences allegedly marketed the test on its website and allegedly advertised and sold the kits for $35 each.

The defendants allegedly further advertised that their test had been “widely used by the Chinese Government to detect infections” and that it allegedly offered “accurate, affordable and reliable results.”

Last week, the FDA authorized the first diagnostic test with a home collection option for COVID-19, but the test – created by Laboratory Corporation of America – still requires authorization and analysis from a health care provider. It uses a nasal swab, not a blood test, and tests for current infections. The test from Applied BioSciences Corp., by contrast, is a blood test which claims it determined the presence of antibodies and a past infection. The test has not received approval from the FDA, which has specifically warned that “serological” testing, the type sold by Applied BioSciences, should not be used alone without other tests or diagnostic tools.

Feuer also announced that his office has filed criminal price gouging charges against Brian Gonzalez, a third-party seller on amazon.com doing business as Check Out Time. Gonzalez allegedly inflated the price of single 8-ounce bottles of Purell hand sanitizer from $19.98 to as much as $54.90. Feuer has filed 19 counts of price gouging against Gonzalez, one for each of the bottles he allegedly sold.

Consumers can report to scams and price gouging by calling (213)978-8070, or visit lacityattorney.org/covid19.

How does anyone take advantage of the public in times like this?

Glad to see there is a special task force looking out for scammers.

People (Some) can be horrible.

I hope they follow through and make these scumbags pay.