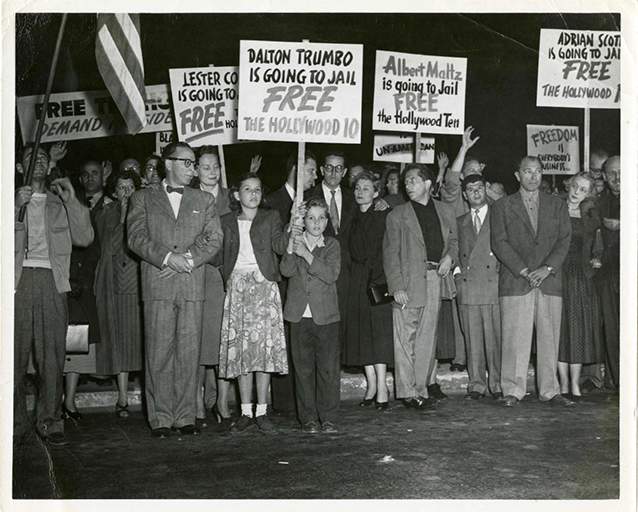 A photo from the museum’s archives shows people protesting on behalf of the Hollywood 10, the group appeared before the House Un-American Activities Committee in October 1947. (photo courtesy of the Los Angeles Museum of the Holocaust)

Journalist Susan King talked to Gettinger about the Blacklist and how it shifted American culture. People interested in the live stream had to register online.

“Blacklist: The Hollywood Red Scare” is about the 1947 House Un-American Activities Committee hearings that led to the Hollywood Blacklist. The film, radio and early television industries complied with government pressure to keep suspected communists from getting hired in Hollywood.

However, less explored is how the content that was being produced in all these mediums changed in response to the Blacklist, eliminating political commentary from the screen and airwaves.

The conversation between King and Gettinger can be watched again at Facebook.

Additionally, the Los Angeles Theatre Works made two audio plays available on the Museum of the Holocaust’s website for free until June 1.

“Judgement at Nuremberg” produced by Abby Mann is a classic film that tells the story of Nuremberg trials, under which German leaders were found guilty of crimes against humanity in 1945 and 1946. Today, the play remains an indictment of the consequences of unchecked authority and the power of thought.

The second play “Kindertransport” by Diane Samuels which is about families, secrets and survival that takes the audience to the days of the impending Holocaust.

As conditions deteriorated in Germany in the 1930s, many people tried to escape, and as a result of British humanitarian effort approximately 10,000 Jewish children from Germany and neighboring countries were relocated to live with families in the United Kingdom, while their parents stayed behind.

The recording includes a conversation with Kindertransport survivor Hilda Fogelson.