Governor to let some stores reopen May 8 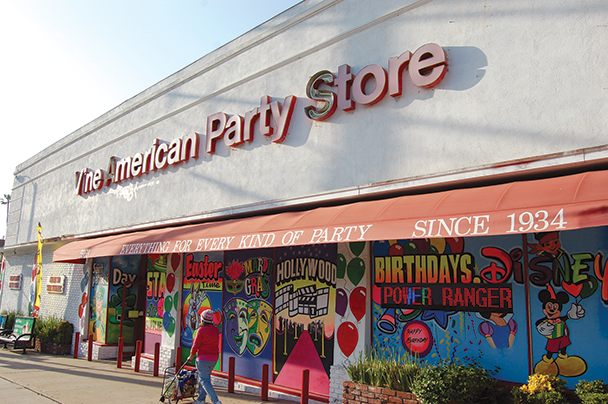 The 83-year-old Vine American Party Store on Melrose Avenue plans to reopen on May 15. (photo by Edwin Folven)

Gov. Gavin Newsom on Monday announced that small businesses such as bookstores, clothing stores, florists and sporting goods stores in some parts of the state will be allowed to reopen on May 8 with modifications that they offer curbside pick-up and customers are not allowed inside.

Los Angeles County Supervisor Kathryn Barger announced yesterday that the Los Angeles County Department of Public Health will also begin to ease the “Safer at Home” public health order on May 8, in accordance with the state’s guidelines, and will begin to allow select businesses and open space areas to reopen. Los Angeles Mayor Eric Garcetti followed suit later that day.

“We are moving this slowly and this deliberately because hasty action kills people,” Garcetti said.

The city of Beverly Hills also announced that businesses that meet the state guidelines will be allowed to begin offering curbside pick-up starting on May 8 if they follow social distancing and infection control protocols.

The announcements signaled the first easing of statewide restrictions in place during the COVID-19 public health emergency. Newsom cautioned that businesses may not be allowed to reopen in all parts of the state, including areas with high numbers of COVID-19 cases, and left it up to county and city officials to decide what will be allowed in their respective areas.

Newsom said the state continues the implementation of a four-stage framework to allow some lower-risk businesses and public spaces to reopen. Based on the state’s progress in meeting public health goals, the governor said the state can begin to move into Stage 2 of modifying the statewide stay-at-home order on May 8.

“Millions of Californians answered the call to stay home and thanks to them, we are in a position to begin moving into our next stage of modifying our stay-at-home order,” Newsom said. “But make no mistake, this virus isn’t gone. It’s still dangerous and poses a significant public health risk. As we move into the next stage of reopening, we will do so with updated guidance to help qualifying businesses make modifications needed to lower the risk of COVID-19 exposure to customers and workers. Californians should prepare now for that second stage of reopening.”

Garcetti said on May 5 that he will listen to county public health officials before making decisions when businesses can reopen. As of May 6, the Los Angeles County Department of Public Health reported 28,644 positive cases of COVID-19 and 1,367 deaths.

Newsom said his decision to allow some smaller businesses to reopen is based on statewide metrics showing hospitalizations have stabilized, there is enough personal protective equipment in stockpiles, surge capacity can be met, adequate testing is being offered and contact tracing abilities are in place.

The guidelines to be released on May 7 are expected to also allow some retail, manufacturing and logistics businesses to reopen with modifications that lower the risk of transmission, although no further specifics were provided. Newsom reiterated that not all businesses and industries considered low-risk will be able to reopen with modifications. The governor said offices, dine-in restaurants and shopping malls will be part of a later sequence of reopening.

The easing of restrictions can’t come soon enough for many small business owners who have been forced to close during the COVID-19 health emergency. Some are formulating plans regarding how business will be conducted.

“If it happens [on May 8], fantastic,” said Leslie Macias, owner of Vine American Party Store at 5969 Melrose Ave. “We are going to offer curbside assistance for balloons and whatever they want. We will all have gloves and have sanitized everything.”

Macias expressed frustration over having to remain closed, as well as a lack of consistent information about when the restrictions will be lifted in different areas.

“I’m dying here. I have been closed for eight weeks. I need things to get going,” Macias said, adding that Vine American Party Store has been in business for 83 years. “Come hell or high water, I am opening up on May 15.”