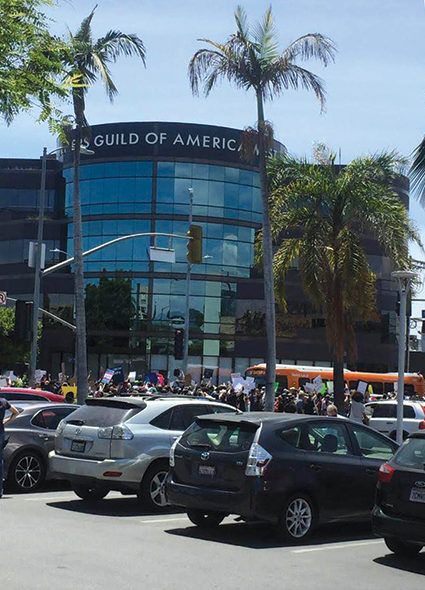 On Saturday, May 30, a protest related to the death of George Floyd in Minneapolis reportedly brought tens of thousands of people to the Fairfax District and Beverly Hills.

The protesters began at Pan Pacific Park, then marched west toward Beverly Hills. At the Original Farmers Market, corner of Third and Fairfax, the shopping center was closed.

“I was present for the first hour of the action at Pan Pacific. It was peaceful, organized, purposeful. Protestors want justice, not violence,” Horvath said.

Near the intersection of Third Street and Fairfax Avenue, protesters climbed atop Du-par’s restaurant, and social media posts show at least one police car on fire. A bus and other police cars appear to be covered in graffiti.

The march then headed west to Beverly Hills. The city of Beverly Hills is urging motorists to avoid the area and residents to stay home.

Los Angeles Mayor Eric Garcetti addressed the demonstration on Saturday afternoon in a video press conference and asked protesters to remain peaceful. The mayor also announced a curfew would be put in place for Saturday night, lasting from 8 p.m. to 5:30 a.m. The curfew, which at one point only covered downtown, will be in place for all of Los Angeles.

“Making sure this is a safe city is a No. 1 priority for me. Making sure this is a just city is an equal priority, but right now when we are in the midst of unsafety, we have to make sure that we are safe,” Garcetti said. “Safe for protesters to exercise their rights peacefully and to make sure their lives are protected, as well as our peace officers and everybody else, and that is what we should be focused on today [and] tomorrow. Let us give voice to the pain that we feel, but let us not take that out on our city. We are better than this los Angeles. We can provide it, and I know we are a city of angels.”

On Twitter, Canter’s Deli on Fairfax said it stood with the protesters.

“In support of the Black Lives Matter movement, we are putting out free bottles of water for protestors. Please stay safe,” the tweet said.

Horvath said on Twitter that “an executive order from our City Manager is forthcoming. Prepare for a curfew.” According to the city’s Twitter account, that curfew is likely to go into effect at 8 p.m.

“I’m asking everyone to stay at home,” Mayor Les Friedman said. “Thousands of protestors marched through our city streets on Saturday to call attention the devastating circumstances surrounding the death of Minneapolis resident George Floyd. While most of the protestors were peaceful and there were no injuries, there were multiple incidents of vandalism in the city. The safety of the Beverly Hills community remains our top priority at all times.”

This story will be updated as more information becomes available.

Retailers at The Grove resume in-store shopping on June 1