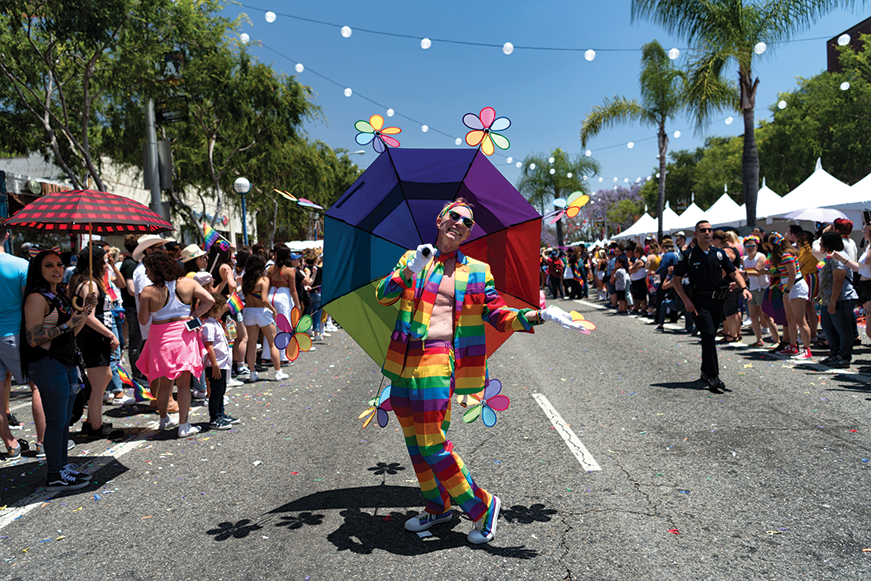 West Hollywood celebrated L.A. Pride 2019. This year, L.A. Pride has been canceled, but organizers are looking to celebrate virtually. (photo by Jon Viscott/courtesy of the city of West Hollywood)

The 50th annual Christopher Street West L.A. Pride festival, which was to be held in West Hollywood from June 12-14 this year, has been canceled due to concerns about COVID-19; however, plans are under consideration for a virtual celebration.

The West Hollywood City Council, as part of a recent discussion about the city’s fiscal year 2020-21 budget, directed City Manager Paul Arevalo to examine options to cancel or postpone all large events through Dec. 31 and to bring those options back for review.

Events under consideration for cancellation or additional postponement include the city’s annual Halloween Carnaval, which attracts half a million attendees each year.

Arevalo is expected to make a recommendation in June, following staff analysis, regarding event closures through the end of the 2020 calendar year.

“The city’s primary focus is on the health and safety of our residents and visitors,” Councilman John Heilman said. “We are not going to be ready to have big events anytime soon.”

West Hollywood has to be realistic about the possibility of canceling events through the end of the year, as there are indications there may be a COVID-19 resurgence this fall, Mayor Pro Tempore Lindsey Horvath said.

West Hollywood is examining the feasibility of hosting events while adhering to proper social distancing and directions from public health officials, said Sheri Lunn, spokeswoman for the city of West Hollywood.

Echoing the city’s thoughts about large-scale events, CSW, the nonprofit that produces the annual L.A. Pride parade and festival, has decided the responsible action is to not host any in-person celebrations for the remainder of the year. 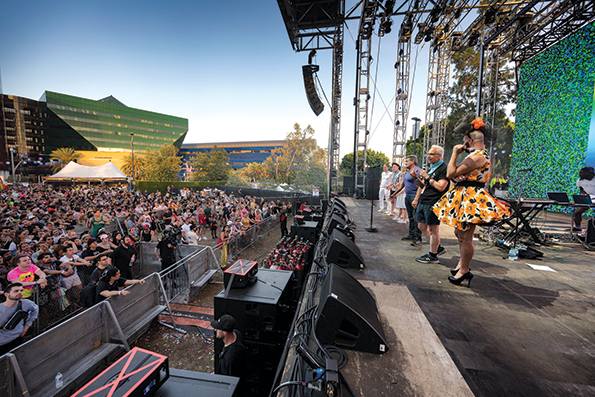 Members of the City Council and Christopher Street West addressed the festival crowd during L.A. Pride last year. (photo by Jon Viscott/courtesy of the city of West Hollywood)

Estevan Montemayor, president of the CSW board of directors, said over the last several weeks, event organizers have worked closely with local and state officials to monitor the evolving effects COVID-19 has had in the community, and decided the safety of the community comes first.

“Our community has always adapted, changed and become more resilient in the face of uncertain times,” Montemayor said. “Although we cannot celebrate Pride with a festival or parade, CSW will make sure the spirit of Pride is not forgotten.”

This year’s Pride commemorates the 50th anniversary. The LGBTQ+ community has overcome many obstacles over the years and has always emerged stronger and more unified, Montemayor said.

“The 50th anniversary will be one to remember regardless of a physical experience this year, and our hope is to resume in-person events for our incredible milestone in 2021,” he said. “Our community will once again look adversity directly in the face and rise up together in solidarity and celebration.”

Heilman said it is heartbreaking that the community will not be able to come together physically, especially since it’s the 50th anniversary.

“It’s a milestone,” Heilman said. “Our community is resilient and we’ll find a way to celebrate. It is only temporary and we’ll come together next year.”

CSW executive director Madonna Cacciatore added the organization is working on virtual experiences and events that will continue to celebrate and engage the community. She was unable to provide specifics, but said within the next few days CSW will make announcements.

“I can say that we are inspired and excited to expand our reach,” Cacciatore said. “We will be expanding digitally and are planning to eventually have Pride programming all year round.”

Heilman said events such as L.A. Pride and the city’s Halloween Carnaval are financially impactful for the city.

The city is working on passing its budget, and as partners for the event, a city staff subcommittee has been in contact with CSW because the city will always collaborate and be involved for L.A. Pride, Horvath said.

Other key findings include $33.1 million generated over Pride weekend in 2019 for workers in the county, and of that total amount, $14.7 million was earned in West Hollywood. It also supported the annual equivalent of 397 jobs, and generated $896,000 in tax revenue in the city.

Cacciatore said although CSW’s original plans for Pride have changed, the LGBTQ+ community is banding together in new ways within just two months of the beginning of the health crisis.

“We are not strangers to keeping each other safe, standing in unity and fighting for our rights,” Cacciatore said. “Though these are challenging times, I know we will come out on the other side of this pandemic stronger, more connected and inspired to continue our work and celebrate each other. Pride is not just a weekend or a month in June, Pride is within our community each and every day.”

Beverly Hills works to get back to business